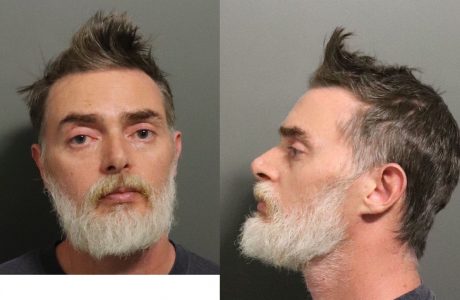 A Lawrence man was arrested late Friday in connection with a collision that killed a 24-year-old mother of two, law enforcement records indicate.

Eric Lee Spaeth, 43, faces pending charges of attempted second-degree murder for allegedly killing unintentionally but recklessly, driving under the influence and driving while suspended, the Douglas County Jail booking log indicates. He was arrested at his home on a probable cause warrant at 8:48 p.m. Friday.

According to a Lawrence Police Department accident report, around 8:20 p.m. on Aug. 20, Spaeth and Elizabeth Allen were both headed southbound on Haskell Avenue; Spaeth was driving a 2013 Toyota Tundra pickup truck, and Allen was on a 2019 Bintelli moped.

Officer Nathan Haig wrote in the report that based on his investigation at the scene, Spaeth rear-ended Allen just south of the intersection with 27th Street, causing the moped to become wedged underneath the truck. Spaeth then continued driving a long distance, dragging Allen along the road until she was eventually thrown from under the truck, the report says.

Spaeth then drove off the road to the right, and both vehicles came to rest on the west side of the road, the report says.

Haig wrote in the report that he attempted to speak with Spaeth but had difficulty communicating with him “due to him being highly intoxicated.”

“Spaeth had slurred speech, glossy eyes, strong odor of an alcoholic beverage emitting from his person, and difficulty recalling what had occurred,” Haig wrote. “Spaeth advised he was driving (the Tundra) southbound on Haskell Avenue when ‘they’ crossed in front of him.

“Spaeth eventually stated he hit ‘her’ and believed she was a pedestrian who was walking,” Haig’s report continues. “Spaeth did not know where she had come from or where the crash had occurred.”

Paramedics were going to take Allen to a trauma center by helicopter, but she died in the ambulance on the way to the LifeStar helicopter, the report says.

Spaeth did not appear injured, the report says. His blood alcohol content was 0.20%, or 2 1/2 times the legal limit of .08%. Lab results from the Kansas Bureau of Investigation later showed Spaeth’s BAC to be 0.205%, according to LPD.

The report also says Allen had ingested illegal drugs but says she showed no evidence of impairment. The report does not provide specific details but it does not say drugs were a contributing factor in the incident.

According to an obituary published in the Journal-World, Allen was a mother of two daughters and was engaged to be married in 2021. She graduated a year early from Lawrence High School in 2013.

The obituary describes Allen as “very exuberant, always smiling and one of the kindest people in the world if you were lucky enough to meet her.” It also says Allen’s scooter was a birthday gift this year.

“She died doing what she loved doing, feeling the freedom of wind in her face,” the obituary says.

Spaeth was taken to Lawrence Memorial Hospital for a DUI investigation, the report says.

Spaeth was being held in the Douglas County Jail on $150,000 cash or surety bond Saturday morning, the booking log shows.