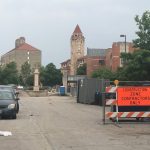 A construction and road closure sign sits on Jayhawk Boulevard just south of the Mississippi Street Parking Garage entrance. The University of Kansas closed the road on Monday, May 20, 2019, for phase four of the Jayhawk Boulevard construction project, which includes a sidewalk and other improvements around the area in front of the KU Memorial Union.

Several roads and parking lots on the University of Kansas campus will be closed for the summer as construction projects get underway.

On Monday, the university closed portions of four roads on campus — Jayhawk Boulevard, Irving Hill Road, Burdick Drive and and 15th Street — for reconstruction and maintenance projects that are expected to last until early August.

According to KU’s website, Jayhawk Boulevard is closed between 14th Street and the Mississippi Street parking garage entrance; Irving Hill Road is closed starting at the three-way intersection on Daisy Hill and extending almost all the way to Naismith Drive; and 15th Street is closed between Engel Road and Naismith Drive. The entirety of Burdick Drive, which is on the west side of Green Hall and intersects with Irving Hill Road and 15th Street, is also closed.

Erinn Barcomb-Peterson, a spokeswoman for the university, said the Jayhawk Boulevard project is the fourth and final phase of the reconstruction of the main campus road, which began in 2013 at the Chi Omega fountain on the other end of the boulevard. The fourth phase includes improvements in the area surrounding the Memorial Union.

Earlier portions of the project included replacing deteriorating utilities; constructing a green stormwater management system in which water filters through planted areas; the placement of new LED lighting, pavement and sidewalks; and relocating some traffic booths.

The project also included the replanting of the boulevard’s historic tree canopy, which once formed a tunnel of trees over the roadway until Dutch elm disease wiped out nearly all of them by the early 1970s.

The other projects on campus appeared on Friday to be for pavement improvements. Barcomb-Peterson said she did not have any information on those projects. A representative for the KU Facilities Planning and Development office did not respond to the Journal-World’s request for comment.

All of the projects are expected to close the roads until Aug. 2, according to the university’s website.

Along with the roads, many parking lots will be closed in those areas. The university suggests that drivers park in the parking garages nearby, including the Mississippi Street parking garage on the north of the KU Memorial Union; the Allen Fieldhouse Parking Garage near Naismith Drive; and the Central District Parking Garage, accessible from 18th Street and Ousdahl Road.

Additionally, in March, the City of Lawrence began construction on the intersection of 19th and Iowa streets, which helps connect KU’s main campus to its west campus. The project, which includes an underground pedestrian tunnel connecting the two campuses, has closed a portion of 19th Street and caused lane closures on Iowa Street.