Major road projects set to begin near 19th and Iowa 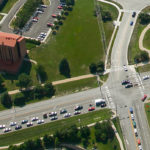 Street closures will greet motorists Monday near the southwest corner of the University of Kansas campus as a multimillion-dollar pedestrian tunnel and road reconstruction project gets underway.

Iowa Street near 19th Street will be reduced to one lane in each direction, and access from Iowa to 19th will be closed, the city said in a news release. Those closures are expected to be in place until August.

Signs will be posted in the area, and the contractor should provide access to local residents, but delays should be expected, the city said.

The construction will also cause changes to KU bus routes 11 and 38 as buses skip stops on West Campus, 19th Street and Stewart Avenue, the university announced. Revised routes will be posted to KU’s transit website, kuonwheels.ku.edu, the university said.

The monthslong project will reconstruct 19th Street from Iowa Street to Naismith Drive and will include traffic signals at 19th Street’s intersections with Iowa Street and Stewart Avenue, as well as sidewalk, drainage and utility improvements along the roadway.

Pedestrian tunnels will be added under the intersection of 19th and Iowa streets, with one tunnel crossing under Iowa Street and the other crossing under 19th Street. The tunnels will connect KU’s West Campus with its new Central District and will link up with shared-use paths along Iowa and 19th streets.

Altogether, the project will cost more than $6 million, and the majority of the tunnel portions will funded by state transportation grants, with the remaining amount coming from KU and city bicycle and pedestrian funds.