For Kansas University Student Body President Jessie Pringle, the moments that reinforce that she not just attends but “belongs” at KU happen on Jayhawk Boulevard.

They’re when she’s walking along the well-trafficked, picturesque main artery of campus and gets to wave at someone she knows, she said.

“This is one of the single most supportive things for our education here at KU … it’s so integral,” Pringle said.

Three of the $11 million project’s four phases — including the most visible and scenic changes that now traverse the heart of campus — are complete. Gray-Little said it was fitting to celebrate the project during KU’s 150th anniversary year.

“Jayhawk Boulevard is iconic to our campus and part of every Jayhawk’s experience,” Gray-Little said. “Whether you graduated years ago or just started your freshman year, you know how special the boulevard is and how many great memories and images the boulevard has seen.” 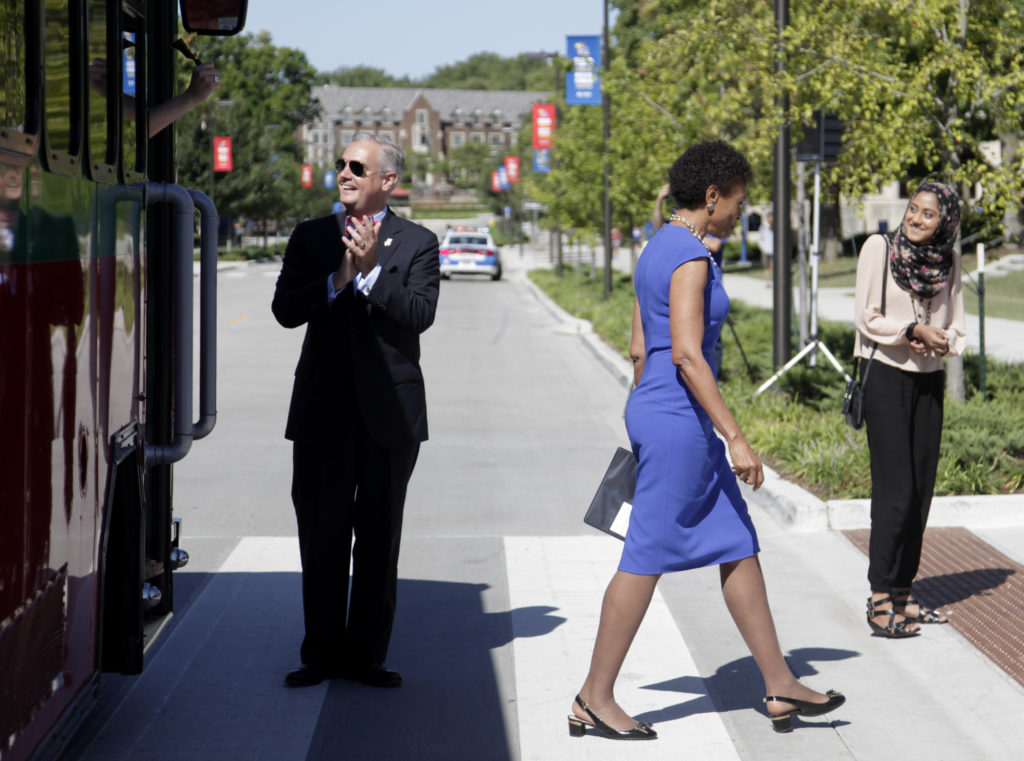 Tim Caboni, vice chancellor for public affairs at KU, left, greets passengers exiting a motorized trolley car in front of Strong Hall Friday, Sept. 11, 2015. At right is KU Chancellor Bernadette Gray-Little. KU held a formal dedication ceremony for Jayhawk Boulevard, which is undergoing a four-year reconstruction project that includes rebuilding the roadway and replanting the historic tree canopy over it. 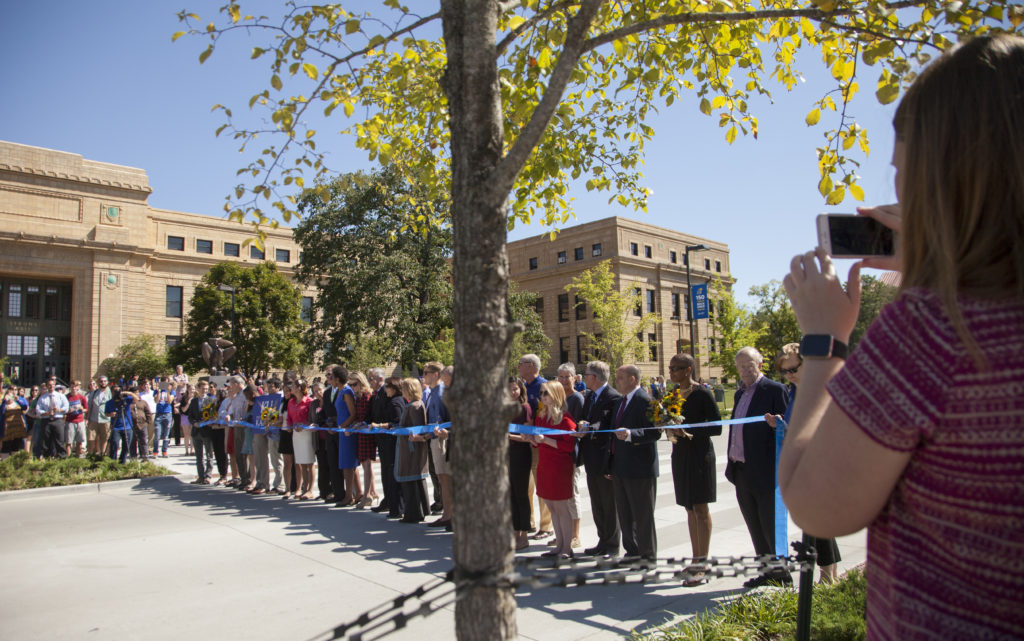 KU Chancellor Bernadette Gray-Little and other KU staff and visiting dignitaries line up to cut a ribbon across Jayhawk Boulevard in front of Strong Hall Friday, Sept. 11, 2015. KU held a formal dedication ceremony for Jayhawk Boulevard.

The Jayhawk Boulevard reconstruction project started in 2013 at the Chi Omega Fountain. Each summer since, moving eastward, KU has completed another stretch of the boulevard.

Phase 4 is slated for summer 2016 and will complete the final section, in front of the Kansas Union from about 14th Street to the Docking Family Gateway at 13th Street.

The project has included some underground but important work: replacing deteriorating utilities and constructing a green stormwater management system in which water filters through planted areas — passively watering trees and flowers and reducing the amount of water that ultimately flows into the storm sewer network.

The most scenic work is the replanting of the boulevard’s historic tree canopy — which once formed a tunnel of trees over the roadway until Dutch elm disease wiped out nearly all of them by the early 1970s.

The landscaping part of the reconstruction project is being funded with about $1 million from KU Endowment, said university spokesman Joe Monaco.

Overall, the plan calls for 200 news trees and 80,000 square feet of additional plantings, according to KU Endowment.

It also calls for measures to help ensure that, this time, the tree canopy lasts.

The new trees lining the boulevard feature disease-resistant varieties including elm, oak, coffee tree, linden, zelcova and fruitless osage-orange, according to a KU Endowment article. Engineered soil was added to the landscaped areas to provide a healthier environment and direct root paths away from paved surfaces, which in the past shifted and cracked from the trees.

The chancellor said she sees Jayhawk Boulevard daily coming and going from her office in Strong Hall, but her favorite time there is during her evening walks from her on-campus home, The Outlook.

“If you don’t already love this place, when you come out in the evening and walk down this beautiful street, you will be captivated,” Gray-Little said.

In a rare move, the new Jayhawk Blvd completely closed to traffic for ribbon to be stretched across it, and cut! #KU pic.twitter.com/iHE1lEz5C2