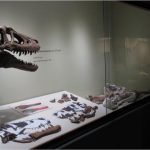 The University of Kansas Natural History Museum this week found itself in the middle of a big flap over a “baby” fossil.

The museum pulled a set of juvenile Tyrannosaurus rex bones from public view following criticism about the fossil’s private owner posting it for sale on eBay for $2.95 million — and highlighting KU ties to bolster his pitch.

Those claims — which ruffled academics and scientists on social media — either aren’t true or violate the university’s legal agreement with the fossil’s owner, KU says. The university is not selling fossils on eBay, the museum assured on Twitter.

“We took two immediate actions on Tuesday,” Leonard Krishtalka, museum director and KU professor of ecology and evolutionary biology, said in an internal memo shared with the Journal-World.

First, the museum took down the loaned exhibit, covering the case before opening to the public for the day then removing the specimens inside, he said. Then the museum asked the fossil’s owner to remove all references to KU and other “misleading language and photos” from his eBay listing.

Indeed we can @sethfinnegan1! The baby #Trex is privately owned & we’ve been honored to be able to share it with the public through a display on our 3rd fl. It is not one of our, or any other musem’s catalogued specimens & we are not involved in any sale. https://t.co/5KTB1HwDjB

Detrich said Wednesday he was in the process of editing the eBay listing, posted by a California-based artifacts seller he was working with.

Detrich said he originally shared his rare fossil with the KU museum two years ago because “the public ought to get to see it.” He said he and his brother unearthed the 68-million-year-old bones from a 4-year-old T.rex in 2013 on property he leased to hunt for fossils near Jordan, Mont.

To the “naysayers” from academia who complained about KU’s link with the for-sale specimen, Detrich says his message is “you’re welcome.”

“You’re welcome — for me to allow my dinosaur to be in the museum and to be able to show the people,” he said. “People have had the opportunity to actually see the baby T. rex.”

On Twitter, Detrich called his baby T. rex “Son of Sampson” and said he was removing it from KU for good.

“I sold Samson for millions of dollars,” Detrich tweeted Tuesday, referencing a full-size T. rex skeleton he unearthed in South Dakota in 1992 and reportedly sold to a private buyer for more than $8 million in 2001. “Soon the world will discover I have another T-Rex only this one is a 4 year old T-Rex dinosaur and another Billionaire will step up and snatch up the Rare specimen for his or her home or office. God Bless America.”

As for Samson’s “son,” the baby T. rex has a 15-foot body, 21-inch skull and serrated teeth, according to Detrich’s eBay listing. The listing also claims the fossil may be the only T. rex youth in the world.

While KU had been edited out of the eBay listing Wednesday, it still said the baby T. rex for sale was on display in “a MUSEUM of Natural History” and that a paper from a professor there “will be forthcoming” in an upcoming scientific journal.

KU does have its own baby T. rex — not currently on display and not for sale — that a university team discovered in Montana, the museum said in tweets of its own. Research is ongoing on that specimen.

The museum accepted the “exhibit-loan” from Detrich, whom Krishtalka described as an “amateur collector,” and his brother Robert Detrich.

“We understood that the brothers were seeking to sell the specimen to a museum and, indeed, had elicited interest for such a purchase from a number of museums,” Krishtalka said. “… Our intent was to keep the specimen in the museum sphere to be enjoyed by visitors until it was sold to a museum.”

However, the fossil was on display at KU under a formal contract approved by KU’s legal team. That contract said the museum would not promote, advertise or have any association with the fossil’s sale.

The museum learned this week that Alan Detrich had “abruptly” listed the specimen for sale on eBay without notifying the museum, Krishtalka said.

In addition to falsely claiming a KU researcher was writing a paper on the fossil for a journal, the listing’s references to KU made it appear the university was promoting the sale, Krishtalka said. He said that violated the contract as well as the museum’s “firm compliance with the ethics policy of the Society of Vertebrate Paleontology.”

Krishtalka was at a conference overseas and other museum representatives were not doing interviews about the matter on Wednesday, museum communications coordinator Anne Tangeman said.

In addition to making national news, including The New York Times, when he put his full-grown T. rex up for sale in the late 1990s, Detrich and his fossil-related pursuits have been featured in the Journal-World. 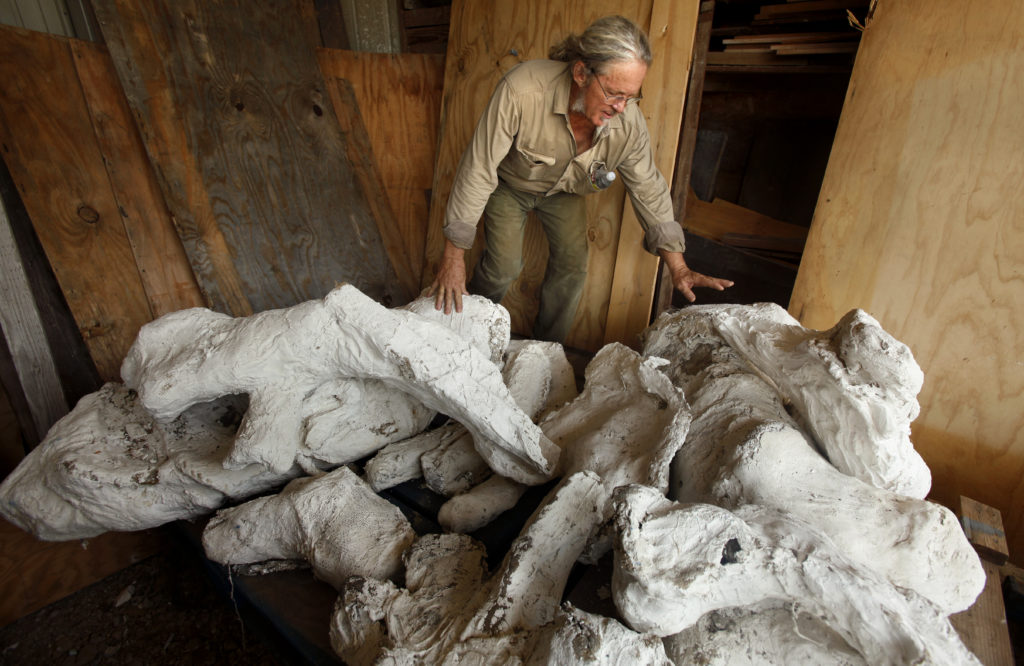 Fossil hunter Alan Detrich climbs through a pile of fossilized triceratops bones in this 2012 file photo. Detrich and other members of his crew found the fossils near Jordan, Mont., in late July and early August of 2012.

Now in his 70s, Detrich is a retired oil investor and antique businessman who took up fossil hunting over 30 years ago, the paper has reported. He spearheaded efforts to declare two dinosaurs — which he possessed full specimens of — as the state fossils of Kansas. One of those efforts ultimately succeeded.

Detrich, who’d been pushing for the mosasaur, indefinitely loaned to the state a 17-foot juvenile mosasaur fossil that he discovered. It has been hanging in the Statehouse in Topeka.

In 2004, Detrich offered to give the state a fossil of a Xiphactinus addax, a predatory bony fish, in an attempt to get a state fossil recognized. He unsuccessfully pursued efforts with the Legislature to honor Xiphactinus for years.

Detrich’s artwork, which also has been featured in the Journal-World, features large sculptures of religious icons fashioned in stone, precious metals and dinosaur bones.

As a private fossil hunter, an expensive pursuit that requires scientific processes, Detrich said Wednesday that he’s faced private- versus public-realm friction before.

“I wanted it out for the scientists to be able to study it,” Detrich said of his baby T. rex. “The sad thing is that the SVP (Society of Vertebrate Paleontology) believes that all things that could be studied by scientists shouldn’t be studied unless they’re part of a museum’s permanent collection.”

Detrich defended selling his dinosaur bones to the highest bidder.

That may not be a public museum, he said, but due to thoughtful estate planning, that’s where priceless items belonging to wealthy people eventually land.

“Millionaires aren’t rich enough to buy these dinosaurs,” Detrich said. “I don’t have a problem with selling to billionaires, because they’ve got enough money to protect this fossil and take really good care of it … At some point, all these things end up in museums.”