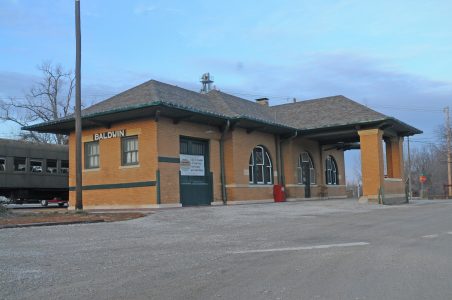 The Baldwin City Council has approved a proposal that would lease the old depot, shown here in a file photo, to the Midland Railway instead of the Douglas County chapter of the Santa Fe Trail Association. The proposal would also have the city purchase the park and parking lot on the depot grounds from the historical society for $100,000.

The old railroad depot at 1515 High St. is owned by the city, but the city currently leases the depot to the Santa Fe Trail Association for a nominal fee of $1 per year. The historical association, in turn, leases the depot and the nearby park and parking lot to the nonprofit Midland Railway, of which BC & Southern is a for-profit, wholly owned subsidiary.

But on March 3, BC & Southern announced it was suspending tourist rides because the historical society had evicted it from the depot. Roger Boyd, president of the Douglas County chapter of the Santa Fe Trail Association, told the Journal-World last month the eviction action was taken because the railroad had not made the lease payment due for the last quarter of 2019.

The city proposes to solve the dispute by ending its $1-per-year lease agreement with the Santa Fe Trail Association and instead leasing the building at the same annual rate to Midland Railway. In addition, the City Council has offered to purchase the park and parking lot, which the association owns, for $100,000. The payments would be made in $5,000 annual installments for the next 20 years.

“They are both valuable to the city,” he said. “We wanted to be fair to both parties and help them be sustainable so they will stay in the community.”

Stevens said Friday that the railroad’s attorney was reviewing the lease agreement, and he would not comment on the proposal’s details. He said attorneys for the city and railroad need not rush to any agreement, because the BC & Southern has suspended its tourist operations through the remainder of the year amid the coronavirus pandemic.

On Saturday, Boyd said the association still hadn’t received the payment from the railroad, which he estimated was about $6,400. The third-quarter payment is greater because most of BC & Southern’s ridership occurs during the holiday season, he said.

“We’re not going to press them on it,” he said of the lease payment. “It will just cause more grief than it’s worth.”

Boyd said the association’s connection with the depot dates back to 1977, when the association convinced the Atchison, Topeka and Santa Fe Railway to spare the building from demolition by selling it to the city for $1. He said the historical society then led a fundraising effort to restore the building and entered into the $1-a-year lease agreement with the city. It started leasing the depot to Midland Railway in 1987, he said.

The city sold the park and parking lot near the depot to the association in 1984 for $1, and the city would buy it back under its proposal. Boyd said the proposed purchase price of $100,000 was fair because the historical society has put more than $400,000 into the park and depot in the past 43 years, including the addition of a picnic shelter. Last month, Stevens said that BC & Southern had made multiple unsuccessful offers to buy the park and parking lot property for its appraised value of $23,000.

Boyd said the $5,000 annual payment from the city would go toward insurance and maintenance costs for the Santa Fe Trail Association’s other properties, including the replica log cabin on U.S. Highway 56 three miles east of Baldwin City; the Grange Hall in Vinland; the Clearfield school at 2162 North 600 Road; the Signal Oak overlook site on East 1750 Road northeast of Baldwin City; and a series of signs marking important sites along the Santa Fe Trail in Douglas County, he said.