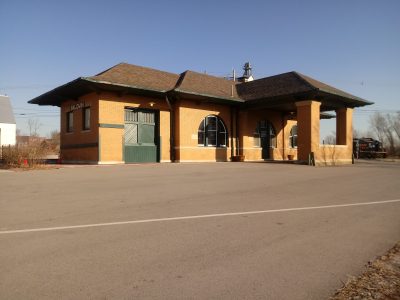 The Baldwin City & Southern Railroad has suspended tourist excursion rides after being evicted from the old depot, shown here Sunday, March 8, 2020. The BC & Southern is asking the Baldwin City Council to lease the building to the railroad instead of the current leaseholder, the Douglas County chapter of the Santa Fe Trail Association.

The Baldwin City & Southern Railroad has suspended tourist excursion rides because of an unresolved dispute with its landlord, the Santa Fe Trail Historical Association.

The railroad announced March 3 it would no longer be offering rides because the historical association evicted it from Baldwin City’s historic depot, 1515 High St. The suspension of passenger service does not affect the Kansas Belle Dinner Train, which continues to offer rides from Baldwin City depot.

Roger Boyd, president of the Douglas County chapter of the Santa Fe Trail Historical Association, said the group took action because the BC & Southern — created last year as a wholly owned for-profit subsidy of the nonprofit Midland Railway — was late on its fourth-quarter 2019 lease payment.

“On Feb. 19. it was seven weeks late,” he said. “We thought the only option for nonpayment was to evict.”

A.J. Stevens, CEO of the BC & Southern, acknowledged the railroad has not made the fourth-quarter 2019 payment, but had the money to do so. The payment was delayed because of issues with the historical association that go deeper than what Stevens calls the “exorbitant” depot lease and includes the historical association’s ownership of the park and parking lot just to the east of the depot.

Midland “moved the needle” on the Baldwin City economy in 2018 and 2019 with the sold-out Polar Express holiday season rides, Stevens said. In addition, the BC & Southern was awarded in November a $750,000 Kansas Department of Commerce grant to help with operational costs as it transitions from the all-volunteer Midland model to the employee-based BC & Southern operation. A stipulation of the grant requires BC & Southern hire at least 22 employees.

BC & Southern’s current growth and future plans make it critical for the railroad to control operational facilities like the depot and parking lot, Stevens said.

“We’re going in different directions,” Stevens said of the BC & Southern and the historical association. “We now have five full-time employees and have posted notification for six more.”

“I’m confident we won’t be down for long,” he said. “I look for this to be resolved soon.”

The historical association’s lease arrangement with the city dates to the Atchison, Topeka and Santa Fe Railroad’s announced intention to tear down the depot when it ended service in 1977 on the railroad line through Baldwin City, Boyd said. The historical society requested the railroad donate the depot to the group, but learned the AT&SF couldn’t make such a direct deed transfer.

“The AT&SF couldn’t deed it to a private organization, so they ended up deeding it to the city,” Boyd said. “Then we started leasing it for $1 a year.”

Historical association members then filled all but one spot on the Santa Fe Depot Restoration Committee, which raised the money for the depot’s renovations, he said.

“The city was unable to contribute,” he said. “The initial restoration was done through donations raised by our members.”

Boyd said the historical association acquired the park and parking lot in the 1500 block of High Street for $1 in 1984. The deed for the property has a covenant requiring the property be used to support tourism activities in the depot, he said.

The historical association’s board discussed the offer for the property at a Saturday board meeting, but Boyd said he couldn’t comment on any decisions, saying the Baldwin City Council was considering the issues.

“The city is working on several different options,” he said. “We are tying to be flexible. It’s up to the City Council and mayor. It’s up to them to work it out.”

Baldwin City Mayor Casey Simoneau declined comment on the dispute except to say the city was working with both parties to find a resolution.

“I hope to have something to present to the City Council at the next (March 17) meeting,” he said. “But at this point, I’m just not sure.”