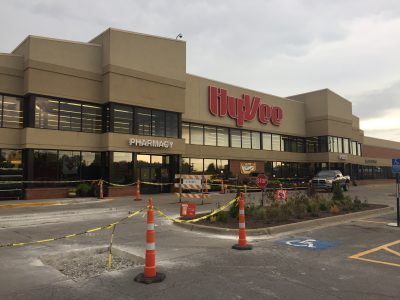 Slow sales along a stretch of road crowded with grocery stores has Hy-Vee closing its store near Sixth Street and Monterey Way in west Lawrence later this year.

The grocery store chain will close its store at 4000 W. Sixth St. at 10 p.m. on Nov. 3, though the convenience store that sits next to the fuel pumps at the location will remain open, the company said in a news release.

Hy-Vee will continue to operate its other Lawrence store at 3504 Clinton Parkway.

Hy-Vee officials via news release blamed the store’s closing on a history of poor sales at the nearly 20-year old store, saying the location “has not met sales expectations for many years and the space no longer reflects the current brand standard and amenities Hy-Vee strives to offer customers.”

“It’s always difficult when we make store adjustments, but we must keep pace with customers’ shopping behaviors,” Frank Woodward, senior vice president for Hy-Vee’s western region, said in the release.

The decision is leaving some longtime customers unhappy. Tony Jones has been going to the store for about 15 years. He’s there most every day as part of a coffee club that meets at the store’s cafe and food court area.

He praised the management and employees of the Lawrence location and said it always seemed to be a busy store.

Joe Schmidtberger also is near the store nearly every day. His family owns the Alvin’s Wine & Spirits shop next door to the grocer. He said he could attest that the grocery store’s business had been declining.

“I think that store has been struggling for years,” he said. “You can kind of tell from the traffic counts in the shopping center.”

Now, the question turns to whether another grocery store will move in to take Hy-Vee’s space in the northwest part of town. The company said the property was owned by Hy-Vee and the company would continue to maintain it while it sought a new tenant.

Schmidtberger, who owned the former Alvin’s IGA grocery store at Ninth and Iowa streets, said he thought a grocery company would locate in the space.

“I don’t think it will sit empty very long,” he said. “I think you will have a Price Chopper or a Checkers or an Apple Market or somebody like that be interested in the property.”

It will need to be a company, though, that doesn’t mind competition. The store is located along a stretch of Sixth Street in west Lawrence that includes a handful of other grocery stores: a Dillons location at Lawrence Avenue and several stores near Wakarusa Drive, including another Dillons, a Sprouts Farmers Market and a Walmart.

The 221 full- and part-time employees at Hy-Vee’s Sixth Street store were notified this morning and will be given the opportunity to transition to the chain’s other stores in the area, the company said. Pharmacy customers will be able to transfer their prescriptions to the Clinton Parkway Hy-Vee or another pharmacy of their choice, the company said.

“Hy-Vee remains committed to the Lawrence community,” Woodward said via the release. “We also will continue to invest in our Clinton Parkway Hy-Vee store in Lawrence.”

The Clinton Parkway location is one of several Kansas City-area stores that will receive about $90 million worth of renovations in total, the Journal-World reported last week.

The Sixth Street closing, though, will cause some shifting of business throughout town, and not just for grocery buying. Jones said his and several other coffee-drinking clubs would be looking for a new home. He said his club — dubbed the Liars Club — is one of about a half dozen such groups that congregate at the store nearly every morning. He said some of the club’s members knew others who gathered each morning at the Sixth and Wakarusa McDonald’s.

“We may go over there and give those guys a run for their money,” Jones said. “But this is still sad.”

Lawrence developer and four-time convicted felon Thomas Fritzel’s request to serve his prison sentences at his ...