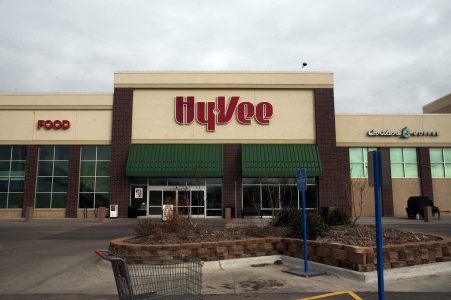 The Hy-Vee grocery store at 3504 Clinton Parkway is pictured in this file photo from 2014.

A new custom-made pizza kitchen, and perhaps a hibachi grill, are coming to Lawrence’s Hy-Vee grocery store on Clinton Parkway. The west Lawrence store is part of a group of Kansas City-area stores that will receive about $90 million worth of renovations in total.

The big change for the Lawrence store will be the addition of a Mia Pizza kitchen and counter. The big idea behind the Mia Pizza concept is you can order custom-made pizzas that are ready in only about five minutes. (What? I can do that too, although it usually involves the ding of a microwave or the roar of a flamethrower. Don’t worry, Hy-Vee has found another way.)

Store Director Brett Albers said part of the renovation will involve the installation of a high-temperature pizza oven that cooks like the wood-fired ovens that you see in many places. That means a Mia Pizza is of the thin crust style that has become popular at many of the more gourmet type of pizza shops.

“It is going to be a really good offering,” Albers said. “We think people are really going to enjoy it.”

This video from a Hy-Vee store in Des Moines, Iowa, that already has the concept in place gives you an idea of how it will work. Plus, you already may be familiar, since the fast-serve, custom-ordered pizza market is popping up elsewhere in town, with places like Pie Five on south Iowa Street.

In general, though, the Mia Pizza concept starts with fresh dough made at the store each day. You stand there and watch the pizza cook flatten the dough in a large press. Then, like at a Subway shop, you start picking your toppings and sauces. Generally, three red sauces are offered — a traditional marinara, a spicy marinara and a barbecue sauce. There’s also an Alfredo option and a pesto option and perhaps others, although I haven’t found a full menu yet but rather am going off the video introduction.

Mia Pizza tries to gain an advantage, it appears, through a larger-than-normal toppings bar for a pizza restaurant. (It does have pretty easy access to lots of toppings, after all.) Cheese toppings include fresh mozzarella, blue cheese, feta cheese, cheddar cheese and a vegan variety of cheese. In addition to the traditional meat toppings, there’s also Genoa salami, chorizo, bacon, traditional New York-style meatballs and chicken Florentine meatballs, which are meatballs mixed with spinach and other ingredients. The toppings bar includes all types of vegetables, including the traditional mushrooms and olives and other such fare. But it also will include artichokes, cucumbers, fresh garlic, grilled pineapple, spinach, and a host of other things that you would expect to find on the store’s salad bar.

As for the hibachi grill, Albers said it certainly has been discussed to add a hibachi station to the food court area of the store as part of the renovation. But he said he hadn’t yet received final word on whether that would be included. A corporate spokeswoman for the Iowa-based grocery store chain also told me via email that a hibachi station was a likelihood for the Lawrence store.

You probably are familiar with that concept as well, since there are multiple restaurants in the area that use them. They feature large bars of raw ingredients, including various noodles, beef, chicken, pork and other meats, lots of Asian and American vegetables, and many types of soy, spicy and salty sauces to cover the dish. You take your bowl of raw ingredients up to the cooks at a hibachi grill and watch them cook your creation and get an aerobic workout in with a pair of spatulas. (Some people buy a home treadmill to lose weight. I just buy a hibachi. I’m sure the weight loss will kick in soon.)

Albers said he didn’t have an official start date for the renovation, but said all work would be completed no later than the spring of 2020. He said the store will remain fully open during the renovation. Most of the work will happen in areas that aren’t open to customers.

“Most of the work will be behind the scenes,” Albers said. “It shouldn’t affect their shopping at all.”