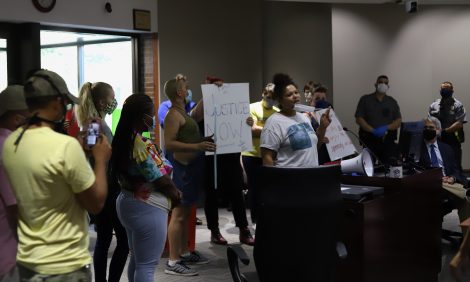 A protester addresses the Lawrence City Commission during its meeting on June 16, 2020. A group of about two dozen protesters filed into the City Commission Meeting Room at City Hall, though commissioners appeared via video.

For about an hour, a group of protesters Tuesday made expletive-laden demands for Lawrence city commissioners to release a black man who has been in the Douglas County Jail awaiting a murder trial for five years.

Protesters flowed into City Hall chambers demanding that the commission defund the Lawrence Police Department and that city leaders use their connections to county offices handling the case to address what they said is the unjust detention of Rontarus Washington Jr.

Washington’s mom, Kenisha Clark, was among the protesters and delivered an emotional plea for her son’s freedom. Clark told the commission she has moved to Lawrence because of the case and is attempting to get her son’s bond reduced so that he can be released and take care of his son. Clark said that she felt police targeted her son, who was 18 at the time he was arrested.

“He was young, he was black, he was uneducated, he was targeted,” Clark said. “And my whole life has been changed and damaged because of it. I want my son. Nothing else matters. If it was your child, what would you do?”

Washington has been in custody since 2015. He is charged with first-degree murder and aggravated burglary in connection with the Nov. 7, 2014, death of 19-year-old Justina Altamirano Mosso. His first trial in 2019 ended with a hung jury. As the Journal-World has reported, the case has been delayed several times for various reasons, and Washington has waived his right to a speedy trial.

Mayor Jennifer Ananda apologized to Clark, and she responded that she didn’t want anyone to be sorry for her, but wanted justice for her son and for someone to fix the problem.

Another protester, Natasha Neal, demanded, at times using curse words, that the commission stop what it was currently discussing to hear out the protesters. Ultimately, the commissioners voted to finish up the item they were on and then move up an agenda item relating to policing matters, so it would occur earlier in the meeting. That item had to do with setting approximate time frames for upcoming discussions about changes to policing, including reallocating some funding away from police to social services.

“We knew what we was doing when we came here,” Neal said. “We’ll be at the courthouse next, but we know where to start at. It started with the Lawrence Police Department doing a poor investigation.”

Another protester later said that the commission had more power and connections than any of them. Only about 10 of the protesters used the public comment period to address the commission, while others stood holding signs demanding justice for Washington. Commissioners sat mostly silent through the commenting period, as some of the protesters talked over them, hurled insults at them and accused them of white supremacy, but Ananda did provide a response.

Ananda, who is a member of the Criminal Justice Coordinating Council, said she wanted to acknowledge the importance of the protesters coming to City Hall and speaking to the commission. Ananda said she had a meeting later in the week with a racial disparities workgroup and would be playing the video recording of the meeting.

The charges against Washington and the extraordinary amount of time he has awaited trial have drawn much attention. Douglas County District Attorney Charles Branson is facing two opponents in the upcoming Democrat primary in August. Both opponents, Suzanne Valdez and Cooper Overstreet, have raised issues of equitable treatment of minority defendants as areas of concern in the race.