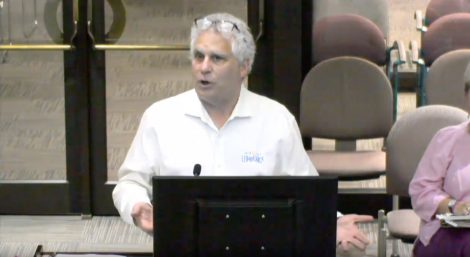 A local tourism leader is asking that the Lawrence City Commission closely consider whether recent shifts in how the city spends an additional sales tax charged to Lawrence visitors are appropriate.

As part of its study session Tuesday, the commission discussed its recent allocation of transient guest tax funds at the request of Explore Lawrence, the travel and tourism organization for Lawrence and Douglas County. Explore Lawrence Executive Director Michael Davidson said that in recent years the city had made several changes to how those funds were spent.

“Money has been shifted around for budgetary reasons,” Davidson said. “Is that still supporting the mission of what transient guest tax dollars are supposed to do?”

The transient guest tax is a special 6% sales tax charged on hotel rooms in Lawrence that is paid in addition to standard sales taxes. City ordinance states that guest tax funds “shall be expended for such purposes as the City Commission determines promotes, enhances, maintains, or improves the tourism, visitor, or convention business of the city.”

The city projects the tax will collect about $1.81 million next year, according to a city staff memo to the commission. Next year, the money will go toward a grant program for local events, downtown beautification, funding for Downtown Lawrence Inc., funding for Explore Lawrence and $284,000 for personnel salaries, among other expenses.

To help balance the city’s recreation fund, the commission approved some changes to how transient guest tax money will be spent in 2020. The temporary changes help eliminate the need to charge entrance fees at the city recreation centers and to close the Community Building for drop-in use, both of which were included in former City Manager Tom Markus’ proposed budget. The recommendation for the changes, which came from a special budget work group involving Mayor Lisa Larsen and Commissioner Stuart Boley, stated that the changes allow for the status quo in 2020 and give the city time to develop a recommendation for the Parks and Recreation Department’s long-term sustainability.

The changes include shifting $51,000 for the Lawrence Cultural Arts Commission from the special recreation fund to the transient guest tax fund and charging Explore Lawrence $30,000 — paid for using guest tax dollars — to rent the office space it uses in the Carnegie Building. The 2020 budget also includes a new internal service fund that distributes overhead expenses among all the city’s operating funds, and $50,000 was taken from the transient guest tax funds for administrative charges.

Davidson noted the shifting of the LCAC funding and the money for the internal service fund, as well as changes that have been made over the past several years. He said that Downtown Lawrence Inc. used to be funded by the general fund and that part of the Downtown Master Plan was funded using guest tax dollars. Davidson said that as the city worked on its budgets, he wanted it to answer how that spending enhanced tourism.

“These are decisions that are made,” Davidson said. “Why are they made?”

“We believe that we’re making the best decision we can collectively on the utilization of these funds,” Boley said. “And the commission next year will be faced with the same question.”

Davidson asked whether, going forward, Explore Lawrence could provide more feedback on the transient guest tax budget earlier in the budget process, and the commission indicated that would be welcome.

Also in the 2020 budget, the city reduced funding for Explore Lawrence by $100,000, bringing the total allocation from the fund for next year to $996,000. Davidson asked if there was a way for the city to commit to providing Explore Lawrence with a certain percentage of the transient guest tax revenue each year or create some other mechanism to ensure a base funding amount that could be adjusted annually based on returns. Commissioners and city staff said those decisions would be made year by year during the budget process, as the current commission cannot bind future commissions to take a certain course of action.