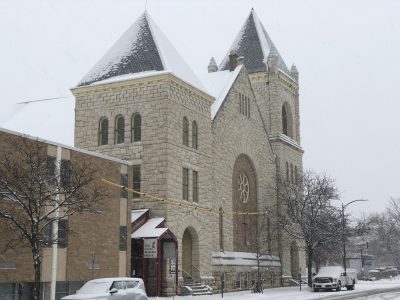 As temperatures drop and forecasts call for snow, several individuals and organizations have come together to provide a temporary overnight shelter for the homeless.

The Lawrence Community Shelter has been operating at a reduced capacity because of financial issues, and some homeless people have been forced to sleep outdoors as a result. But city code allows religious organizations to operate temporary shelters for the homeless under certain restrictions, and one church plans to open its doors to the homeless beginning Sunday evening.

The First United Methodist Church, 946 Vermont St., will begin operating a temporary cold-weather shelter any time the overnight low is predicted to be below freezing, according to the Rev. Tom Brady.

“The cold weather is here and the need is here, so it’s time to respond,” Brady said.

Brady said the church planned to begin operations Sunday because of wintry weather in the forecast. According to the National Weather Service, temperatures are expected to be in the 20s on Sunday night, and snow and freezing rain are likely.

While the church is providing the space, Brady said multiple people and organizations have come together to coordinate the temporary shelter. Those include Vice Mayor Brad Finkeldei; Mathew Faulk, supportive housing program manager with the Bert Nash Community Mental Health Center; Drop-in And Respite (DARE) Center Director Loring Henderson; and the Lawrence Community Shelter itself.

Brady said the shelter has donated sleeping bags and sleeping mats and the DARE Center has donated pillows. Both Brady and community advocate Steve Ozark, who has also been involved in the effort, said the program is seeking volunteers for overnight shifts and other needs.

“We need overnight volunteers each night to be open,” Ozark said. He said the program may break the night into two or more shifts.

Brady said that on sub-freezing nights the church will accept guests from 8 to 10 p.m. at the church’s 10th Street entrance. He said lights out will be at 10:30 p.m. and that the plan is to operate until 7 a.m.

The program is using a section of city code that allows churches and other religious organizations to provide temporary shelter for up to 15 people without a permit, Brady said.

Specifically, religious institutions can use their buildings for emergency overnight shelters for as long as four months out of the year. The shelter can have up to 20 occupants, consisting of 15 shelter clients and five support staff members. A special-use permit can be requested if the organization wants to exceed those limits.

Brady noted that the church previously operated a temporary shelter when the local homeless shelter was located downtown. In December 2012, the shelter moved to a larger location that provided almost three times as much space, the Journal-World reported at the time.

But the Lawrence Community Shelter, 3655 E. 25th St., reduced its capacity this summer by about half, from 125 to 65 people. The shelter has 125 beds, but shelter leaders have said it can’t afford to fund the staffing levels needed to safely operate at full capacity. The shelter ran a successful fundraising campaign last month that enabled it to open up an additional 25 beds for the winter, or a total of 90 beds, but that addition did not meet all the needs in the community.

Earlier this year, the shelter increased the required number of staff who work directly with guests from two to four people. The staffing change was based on recommendations from a consultant hired by the city and Douglas County. The shelter subsequently requested a funding increase from both local governments, but that request was not fully funded and the shelter decided to reduce capacity rather than go back to running at full capacity with only two staff members working directly with guests, as the Journal-World previously reported.

Those interested in volunteering for the temporary winter shelter can contact the program by email. Brady said potential volunteers should send their name and contact information to Lawrencewintershelter@outlook.com.

• Sept. 4 — About 25 people forced to leave homeless shelter had nowhere to go; some expected to camp

• Aug. 29 — Swell of donations helps find housing for some, but homeless shelter still expects to force about 25 people to leave Friday