About 25 people forced to leave homeless shelter had nowhere to go; some expected to camp

When David Miller found out he would soon be forced to leave the local homeless shelter, he said a lot of other things in his life seemed to go wrong.

“The bottom fell out and I’ve just been really screwed up,” Miller said. “Like, you know, from that point on, I started having health problems and dental issues.”

Miller is one of about 25 people recently forced to leave the Lawrence Community Shelter, which he said provides people in his situation at least some form of stability. The shelter, which also gives guests three daily meals, reduced its capacity by about half, from 125 to 65 people, as of Friday afternoon.

Miller said he hasn’t been able to find housing, but has been temporarily sleeping in a nonresidential building with the owner’s permission. Miller said he was so grateful to have some form of shelter, even if it’s just for the time being. Others in Miller’s situation may not have been as lucky.

The shelter stopped accepting new guests on Aug. 8 in an attempt to decrease the number of people it had to force to leave and found alternate arrangements for some guests. However, Lawrence Community Shelter Assistant Director Kenny Yates said that about 25 people left the shelter last week with no housing plans.

Yates said that before many guests left they opted to take from donated camping supplies and toiletries. In addition to tents and sleeping bags, Yates said The Merc donated bags of snacks and that the shelter put together backpacks of other supplies.

“We had put together some resource book bags that were full of things like rain jackets, tarps and little things like instant coffee, sunscreen, bug spray, mini first aid kits and various things like that,” Yates said. “Given some of the circumstances we knew people would be facing, those are the things that would help them the most.” 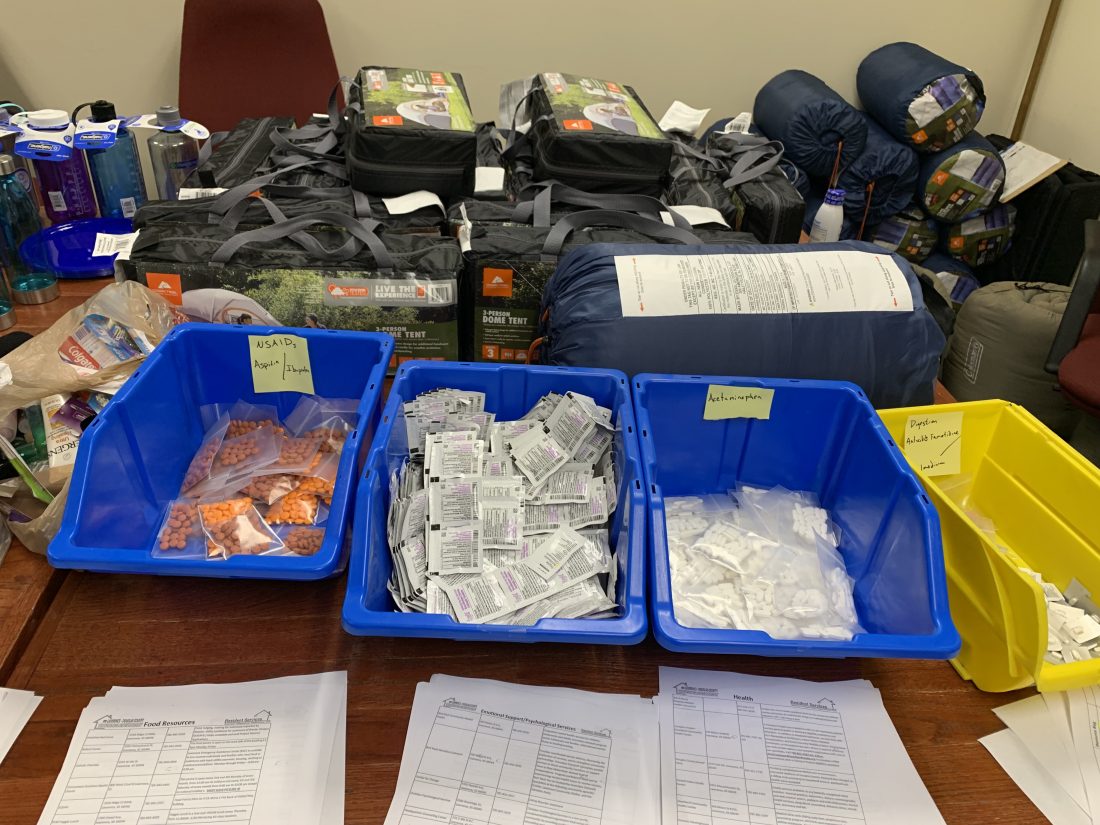 Donated camping and other supplies are pictured at the Lawrence Community Shelter.

Yates said he didn’t have direct knowledge of exactly where the people who had no place to go went but that based on conversations he heard and how many people took camping supplies as they left, he expected some would be camping. He noted that supplies remained and that the people who left the shelter before the supplies were available could still come back to get some.

“We were able to purchase these goods specifically because the community had responded really well to some of the needs, so we were able to use that money to get some things to help people that were exiting,” Yates said.

There are no other overnight homeless shelters in Lawrence, though homeless people can use services during the day at a drop-in center downtown, which provides showers, laundry facilities, water, coffee and snacks. The Lawrence City Commission approved a permit for the Drop-in And Respite Center earlier this year, and center director Loring Henderson said the center opened in June.

Henderson said many of the people forced to leave the shelter still don’t have a place to stay.

“They don’t know what they’re doing,” Henderson said. “What I’m getting more than anything is, ‘Where am I supposed to go?’ There is not a good answer to that.”

Henderson said that so far he had not seen an uptick in the number of people using the center, but he noted those numbers would be hard to gauge because people who stay at the shelter still use the center during the day.

Regarding his situation, Miller said he just “got stuck.” He said he had been homeless about a year and that the past couple of months he had been doing a training program that pays a stipend. However, he said that money had not been enough to get into housing on his own. He said he has been applying to all the government housing assistance that he’s qualified for, but he was told there was a six-month waiting list. He said he actually wasn’t sure if he was guaranteed to get assistance within that time.

“I’ve done all the paperwork I can possibly do the last three weeks,” Miller said. “I’m pretty well finished, so now I’m just waiting. So that’s where I’m at.”

The shelter reduced its capacity because of a funding shortfall of hundreds of thousands of dollars and changes to what the shelter considers safe staffing levels, as the Journal-World previously reported. Both the City of Lawrence and Douglas County significantly increased their funding levels for the shelter for 2019 and 2020, but not by as much as the shelter requested. City commissioners indicated they were interested in reviewing the city’s sales tax receipts early next year to see if they outpace current projections, which could enable the city to do a funding amendment to provide the shelter with additional money.

Shelter board president Thea Perry previously told the Journal-World that the shelter continued to raise money with the hope of being able to increase its capacity before wintertime. Perry said the shelter would need to raise about $150,000 to pay for the staff, food and other expenses needed to increase the capacity by just 30 people.