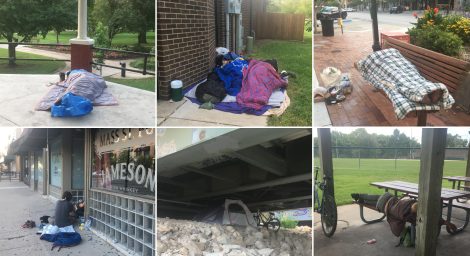 For Lawrence’s homeless with nowhere to go at night, their new beds consist of a park gazebo, the dry concrete next to a building or a patch of ground along the Kansas River. Others opt not to sleep at all.

“Some walk the streets to stay awake, for safety, because they don’t want to lie down to go to sleep,” said Loring Henderson, director of a downtown drop-in center for the homeless at 10th and Kentucky streets. Those homeless people, Henderson said, opt to take short naps during the day because they fear being assaulted or having their possessions stolen if they sleep out in the open at night.

The Lawrence Community Shelter, which also gives guests three daily meals, recently reduced its capacity by about half, from 125 to 65 people. The shelter, at 3655 E. 25th St., stopped taking new residents in early August, and though the shelter was able to find housing for some people, about 25 people were forced to leave the shelter when the reduction went fully into effect on Aug. 30. Community donations of money and supplies allowed the shelter to offer those people sleeping bags, tents and other camping supplies. However, it was not clear where the homeless were expected to camp, as there are no campgrounds within city limits.

Henderson said the notion that the homeless might travel back and forth daily between town — where food and other resources are available — and the campgrounds at Clinton State Park or other legal camping spots in Douglas County is not realistic. He said those campgrounds are too far for most to travel daily and that, instead, camping takes place on the riverbank and anywhere else the homeless can feel protected.

“Any place there are a bunch of trees, to protect against weather and against people,” Henderson said.

Over the past two weeks, the Journal-World has seen people sleeping in various places in and around downtown, including within the South Park gazebo, against the downtown Parks and Recreation building, on public benches in parks or along Massachusetts Street, and under bridges — all of which are against the law.

Mathew Faulk, supportive housing program manager for Bert Nash Community Mental Health Center, said that while some homeless people are willing to camp legally at area campgrounds, for many it’s simply too far from needed resources. He said it made sense that people would tend to stay in town.

“Most people are opting to stay within the city to be close to resources,” Faulk said. “Close to LINK and The Salvation Army for lunch, close to the food pantries, close to places like the library where they can get out of the weather, close to amenities like a bathroom.”

Faulk emphasized that the shelter’s reduction in capacity exacerbated an existing problem. He noted that in the middle of January, when the area’s annual homeless count was conducted, 73 people were found sleeping outside. He said it’s not a new issue and that the people turned away from the shelter throughout August and those forced to leave Aug. 30 just added to those people who were already sleeping outside.

Apart from weather and safety concerns, a homeless person sleeping outdoors also has to contend with other consequences. It is against city ordinance to sleep or otherwise camp downtown, and the city also has rules against being in parks overnight, with violations of either rule subject to a citation and a fine. Lawrence Police Department Sgt. Amy Rhoads said that officers used discretion when issuing such citations and that generally officers will ask the person to move along and would likely only issue a citation if they refuse.

So far this year, Rhoads said the police department has issued 10 citations for illegal camping downtown and five citations for violation of park hours. There have been 69 after-hours “incidents,” meaning that someone has called police to report someone being in a park after hours. Rhoads said she was not aware of an increase of people camping downtown or sleeping in parks since the shelter reduced its capacity and that the department has continued to respond to those calls in the same manner as before.

“The Lawrence Police Department will continue to respond to calls for service within our community and respond to each incident based off of the totality of the circumstances involving each individual call,” Rhoads said via email.

Henderson and Faulk both said that although homeless people who are not able to stay at the shelter can sometimes couch-surf with friends here and there, they end up sleeping outdoors or camping because they have no other options. Both also said that addressing the issue would take a communitywide effort. Faulk said that right now the community lacked a meaningful place for many homeless people, who are often struggling with substance use, mental health or other issues.