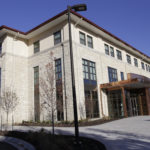 The 1.2 million McCarthy Hall houses the Kansas men's basketball team to the southeast of Allen Fieldhouse on KU's campus.

University of Kansas police are investigating the reported rape of a 16-year-old girl at the on-campus apartment building where the KU men’s basketball team and other male students live.

The case remains open, and no arrests have been made, KU Police Chief Chris Keary said Tuesday.

The alleged rape and three other related crimes occurred between 10 p.m. Dec. 17 and 5 a.m. Dec. 18 at McCarthy Hall, 1741 Naismith Drive, according to the police report, requested and obtained Tuesday by the Journal-World. In addition to rape, the suspect also is accused of contributing to a child’s misconduct, furnishing alcohol to a minor and possession of drug paraphernalia, according to the report.

McCarthy Hall is an all-male apartment building operated by KU Student Housing. McCarthy is home to about 40 students; roughly half are KU men’s basketball players and the other half are upperclassmen, nontraditional or transfer students.

Keary said the 16-year-old girl, who was not a KU student, was visiting residents in the building.

The police report indicated the suspect was known to the girl.

The offender was suspected of using alcohol and drugs, and responding officers confiscated two glass smoking devices with residue, according to the police report.

Keary would not share any information about the suspect, including whether the suspect was a KU student or lived at McCarthy Hall.

KU police have not forwarded the case to the district attorney at this time, Keary said.

“The investigation is ongoing,” Keary said. He added, “we believe there is no risk to the campus.”

Crimes reported to KU police typically are posted publicly, to the department’s online daily crime log, within a few days. The alleged rape at McCarthy Hall was not posted until sometime over a week after it was reported.

Keary would not specify why posting the McCarthy report was delayed. However, generally, he said that if police believe posting an incident could interfere with an ongoing investigation, they wait to do so until that’s no longer a concern.

A child in need of care, determined to be a runaway, was reported to KU police shortly after 4 a.m. Dec. 18 at McCarthy Hall, according to the online crime log.

That report appeared on the log within a few days.

At the time, KU police Deputy Chief James Anguiano said that the runaway was picked up, which was indicated as an “arrest” on the log. He said he could not release any more information because the matter involved a juvenile.

Keary would not confirm whether the runaway report was connected to the alleged rape.

The police report in the runaway case, also requested and obtained by the Journal-World, does not list any information about the runaway. However, the witnesses in the runaway case were the same two women interviewed in the rape investigation and a sixth KU basketball player.

Dec. 16 was the last day of fall finals on the KU campus. The night of Dec. 17, the KU men’s basketball team played Davidson College at the Sprint Center in Kansas City, Mo.