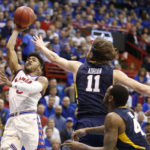 The Kansas basketball team hadn’t lost consecutive games inside Allen Fieldhouse since the 1988-89 season entering a top-10, Big Monday clash with West Virginia. By the end of a long night for the Jayhawks’ offense, 14th-year KU head coach Bill Self still had yet to experience back-to-back home losses.

The No. 9 Mountaineers squandered a 14-point lead with less than three minutes to play in regulation, despite holding No. 3 Kansas to 33-percent shooting over the course of the first 40 minutes, and Kansas prevailed, 84-80, in an overtime thriller.

Essentially, this game was over. But once WVU gave KU a glimpse of hope, the Jayhawks took over.

And once the Jayhawks found themselves in overtime, and the crowd was losing its collective mind, WVU didn’t stand much of a chance.

Graham opened the extra five-minute period with a 3-pointer, freshman Josh Jackson scored on a hanging layup off the glass, Graham cashed in again from 3-point range and West Virginia crumbled, losing the game and a chance to sweep Kansas in the regular season.

Kansas fell in an early 10-0 hole versus West Virginia and was just 1-for-12 from the floor before Vick reminded his teammates what it looks like when the ball goes through the net.

The sophomore backup guard, who hadn’t scored in double figures since Dec. 30 at TCU (17 points), got one to drop in transition, cutting the Mountaineers’ lead to nine.

The 6-foot-5 wing from Memphis then followed that up with back-to-back 3-pointers — marking his first game with multiple 3s since that same conference-opening win at TCU.

KU then went on a 16-0 run to take a five-point lead, with Jackson and Mason contributing at the free-throw line, Lucas and Svi Mykhailiuk scoring on dunks, Mason hitting a 3-pointer and Vick converting a layup.

Vick was the only Jayhawk to score multiple baskets in the first half. He shot 4-for-4, while the rest of his teammates combined to go 6-for-26 (23.1 percent).

After a horrid start, the Jayhawks got back to their competitive selfs with an assist from Vick’s assertiveness.

• Defensive highlight: Early on in this hotly contested Big 12 showdown, Graham morphed from a small, skilled guard into a fast-break rim protector.

With KU already down 12-5 and about to see that margin grow, the 6-foot-2 junior guard sprinted from behind to catch Jevon Carter and smack his layup off the backboard

Graham, who had blocked just five shots the entire season leading up to the Big Monday showdown — and only 10 in his career — stymied Carter and wowed the KU faithful, who were very much in need of something to cheer about at that juncture. The undersized junior guard provided KU with a rare defensive stop and spark.

• Key stat: Second-chance points. Typically, Bob Huggins’ WVU teams are the ones pounding the boards for extra opportunities on offense. But KU out-Mountaineered the visitors, scoring 14 second-chance points to WVU’s 6, thanks to 12 huge offensive rebounds for the home squad.

• Up next: The Jayhawks will have to take on another one of the Big 12’s foremost challengers to their throne, No. 4 Baylor. KU edged the Bears on Feb. 1, in Allen Fieldhouse, but the rematch comes at Baylor’s Ferrell Center Saturday (noon tip-off, CBS).