Building on the possibilities

There are plenty of signs that Rebecca Buford is not your typical Lawrence real estate developer.

For one, she’s a 30-year-old with a degree in Asian studies and women’s studies who has an office in a small cinder-block room with wall hangings such as give “peace a chance” and quotations from Mahatma Gandhi.

Then there’s the nose ring, an uncommon adornment among Lawrence’s top developers.

But the biggest sign Buford isn’t your ordinary mover-and-shaker: She builds houses without profit and doesn’t mind.

As executive director of Lawrence’s Tenants to Homeowners, that’s the only way she knows to do it.

“I have a lot of people come in here, a lot of single parents, who say they’ll never be able to buy a house in Lawrence,” Buford said. “It is exciting to tell them that they can.”

Make no mistake about it, though: Buford is in the development business. Since taking over as the nonprofit’s director in April 2005, she’s overseen construction of 11 new homes that are sold at below-market prices – usually between $90,000 and $120,000 – to individuals who otherwise couldn’t afford a home in Lawrence. 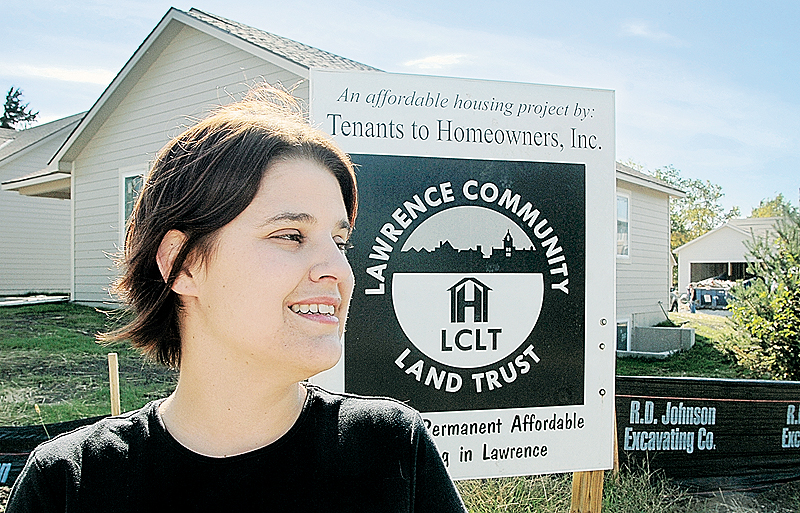 As executive director of Lawrence Tenants to Homeowners, Rebecca Buford has overseen construction of 11 homes that are sold at below-market prices and launched the Lawrence Land Trust program. Her primary goal is to provide more affordable housing in Lawrence.

This year will be even busier. Buford has 15 homes in the pipeline, including the organization’s largest project ever – Homewood Gardens, a 10-home development near Bullene Avenue and La Salle Street in East Lawrence.

The group this week also is marking the one-year anniversary of its Lawrence Land Trust program. The program is one of just a handful in the country designed to provide permanently affordable housing in the community.

It allows qualifying individuals to buy homes for up to $35,000 below market value if the buyer agrees to limit the price for which they’ll resell and pledges to sell it to another person who meets the income guidelines.

The quickened pace and new ideas at the organization, which has been around since 1992, are being noticed by city leaders.

“She has been really innovative,” said City Commissioner Boog Highberger, chairman of the city’s Housing Needs Task Force. “I and other people have been interested in this land trust idea for 20 years, but it was Rebecca who figured out how to make it happen.

“It is absolutely essential that we have a community where people who work here also can afford to live here. She understands that.”

Buford admits that when she joined the organization as associate director five years ago, she knew little about housing. She had spent most of her young career as a social worker for domestic violence shelters here and in Los Angeles, where she attended college.

“It has been quite a learning curve,” Buford said. “Honestly, coming out of college, I never thought I would be yelling at contractors. But that’s actually been kind of fun.”

What’s she learned in the five years is that it can be quite difficult to buy a home in Lawrence, even for people who go to work every day.

“I know the image a lot of people have of us is that we just help low-income families, but that’s not necessarily who we serve,” Buford said. “A family that is just scraping by and can’t pay their bills on time isn’t in a position to buy a home.

“The people we work with are people who have incomes. They just aren’t enough in Lawrence.”

To be eligible for Tenants to Homeowners assistance, a person or family must have an income no greater than 80 percent of the Douglas County average, as determined by the federal Department of Housing and Urban Development. Currently, the 80 percent mark for a family of four is about $51,000.

Homeowners in the program also must be able to come up with a down payment equal to 5 percent of their annual gross incomes.

“We think they are going to be a huge tool in keeping our neighborhood affordable,” Good said. “We would like to see them develop as many vacant lots as possible in our neighborhood.”

Buford became a significant player in East Lawrence politics earlier this year by diving into the controversy surrounding a proposed project by developer Bo Harris to redevelop the area around Eighth and Pennsylvania streets. Buford reached a deal with Harris to ensure that at least six of the 54 condos planned for the project would be part of the Tenants to Homeowners land trust program.

The deal between Harris and Tenants to Homeowners may be a precursor of things to come. Buford, who also serves on the city’s Housing Needs Task Force, said she would like the city to require developers of sizable projects to set aside a predetermined number of lots for an affordable housing program. Developers would be paid for the lots, but they would receive the below-market rates that Tenants to Homeowners charges buyers.

The idea – called inclusionary zoning – is done in other communities that practice Smart Growth planning.

If Buford becomes the champion for that new idea, it may land her in quite a debate. Already, some builders have said they believe the idea of inclusionary zoning may hurt the overall housing market in part because they would have to charge more for their other houses to make up for the discounted rates.

“You’re not going to get anything for free,” said Bob Santee, an owner of Lawrence-based Denning-Santee Construction. “The cost will get shifted somewhere.”

But Buford said she likes trying to tackle such problems. For example, she said an inclusionary zoning program could be structured to provide an incentive for builders to participate, such as allowing them to construct slightly more homes on a piece of property in exchange for complying with the requirement.

“We all have something to gain from it. When you increase homeownership, you increase the number of people who really care about what happens in the long-term because they own a piece of this community. That is why even if you have a nice house at Alvamar, you should care about affordable housing.”