Affordable homes elusive for many

In some ways, the worst part about Tanya Spacek’s nearly three-year search for an affordable home to buy in Lawrence is how it has made her feel.

“I don’t feel like part of the middle class,” Spacek said. “I feel like low working class here.”

It’s frustrating because both she and her husband have full-time jobs, but with two children and an annual income of just less than $40,000, finding a home to call their own is difficult at best in Lawrence.

Helping people like Spacek is what a new city task force – which first met Wednesday – hopes to do.

“We have all watched housing prices rise and our wages haven’t,” said City Commissioner Boog Highberger, who is serving as chairman of the city’s Housing Needs Task Force. “It’s getting harder and harder to have a home here in Lawrence.”

The 12-member task force agreed Wednesday to set a broad goal of creating strategies that will allow people who work in Lawrence to also live in Lawrence. If the city can’t figure out a way to accommodate a broad range of income levels, the community risks losing its diversity, Highberger said. 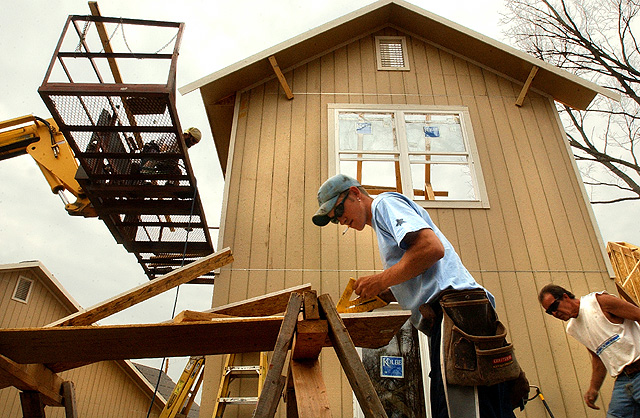 Home builders with Crumet Construction, Patrick Nieder, front, Lawrence, Ed Nieder, right, Lawrence, and Mike Lesher, left, work Wednesday afternoon on the exterior of a new home near the corner of 15th Street and Haskell Avenue. With housing prices outpacing wage increases, many Lawrence residents have had a difficult time finding an affordable home. A new city task force is convening to address that problem.

Spacek thinks the situation is serious. She works as a secretary at Lawrence Memorial Hospital and her husband, Nick, works at a downtown bakery. She’s originally from a factory town in northern Illinois that is similar in size to Lawrence. She knows that if she would have decided to stay there that her family’s income would have been enough to squarely plant them in the middle-class lifestyle.

“My best friend I grew up with makes about what Nick and I make, and they’re living the good life,” Spacek said. “It is a very nice life for them. I don’t want to live back there because I love Lawrence, but it is frustrating to think how different life is here.”

Spacek said she knew many communities where $60,000 would purchase a nice three-bedroom home. She’s paying more than twice that for her new home in the 300 block of Illinois Street, and then is only able to swing the deal thanks to help from Lawrence’s Tenants to Homeowners.

A report in May by a consulting firm hired by the city to examine the community’s affordable housing situation said that, based on wages in the area, many blue-collar workers would need a home that was $100,000 or less or a rent payment of $450 or less.

A search Wednesday through the Lawrence Multiple Listing Service of homes found that there were 24 homes for sale in the city that were $100,000 or less. In Topeka, which has a population not quite two times larger than Lawrence, there were 407 listings on a similar MLS Web site.

Rebecca Buford, executive director of Tenants to Homeowners and a member of the task force, said many of the lower-priced homes in Lawrence still weren’t a good value because they often needed major work.

The new task force won’t just focus on people trying to buy an affordable home. The members agreed to look at the city’s rental situation as well. Barbara Huppee, executive director of the Lawrence-Douglas County Housing Authority, said the community has a total of 1,616 subsidized rental housing units. But that number has remained virtually unchanged since 1995 when a federal grant program to create such units dried up.