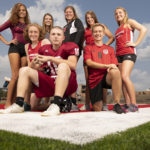 Lawrence High’s fall sports teams will kick off the 2018-19 season this week.

The girls golf team opens the season Wednesday, while the girls tennis team is slated to begin its campaign Thursday. The boys soccer team, which will be the only program to play at LHS this week, has its season opener Friday. Meanwhile, many other teams will launch play next week.

Here is a peek at all of the Lions’ fall sports programs ahead of the 2018 season:

After a 5-5 season in 2017, the Lions will look to post a winning record under head coach Steve Rampy this fall. Rampy enters his first season as the LHS head coach after replacing Dirk Wedd, who coached the team for 19 seasons.

Rampy will have plenty of experience on the defense, which has six of the team’s seven returning starters. Senior linebacker Caleb Mondi will anchor the defense, though he will be joined by several returning forces, including Sam Bart, Enoch Jewsome and Eric Galbreath on the defensive line. Defensive back DeShon Lewis and safety Cole Mondi will lead the secondary.

Senior offensive lineman Bryce Tibke is the only returning starter on the offensive end, but senior quarterback Garrett Romero did start under center in the season opener last season.

“The biggest challenge is just like any other team, it’s to come out tomorrow and get better,” said Rampy, who was a head coach at Blue Valley for 25 seasons. “I think it is too early to say how good this team can be. There is some talent on this team.”

The Lawrence volleyball team has every intention of returning to the Class 6A state tournament.

Last season, LHS went 27-13 en route to its first state berth since 2009. The Lions won just one of their three games on the first day, however, and ultimately fell short of reaching the semifinals. Behind a large senior class, they feel confident in their chances of making a deeper run this fall.

“The ultimate goal is to get back,” senior Lauren Maceli said. “We are humble, but hungry. We know what we need to do to get there and advance on in state. We kind of just showed up, because we had made our goal of going to state. Now, our goal is to win state.”

Maceli, who led the Sunflower League with 561 digs last season, will be one of the key contributors on a loaded team. Senior Sammy Williams, who registered 215 kills in 2017, is back for one last attempt to claim a state title, along with fellow seniors Baylee Unruh and Laura Willoughby.

“We have a tremendous amount of leadership,” 12th-year head coach Stephanie Magnuson said. “As long as we keep our eye on the prize and work day in and day out, I think we will be fine.”

Lawrence enters the 2018 season with the goal of qualifying for the state meet as a team.

Evann Seratte was the team’s only state qualifier in 2017, finishing in 76th place at the final meet. The senior returns for her second season in the sport, and highlights an impressive group on the girls side that includes Layne Prescott, Leslie Ostronic and Sophie DeWitt. The boys team features Cole Shupert, Ruben Little Hood and Derek White.

“They are looking pretty good this year,” third-year head coach Laura Brensing said. “Our ladies are small, but we have a good shot of placing at meets. We have some strong guys, as well.”

They key for the girls team, in particular, will be staying healthy.

“If nobody gets injured, we should have a solid five to score points every meet,” Ostronic said.

After falling shy of a medal last year, the Lawrence gymnastics team is poised for a big step.

LHS, which finished fifth at the state gymnastics meet last season, brings back plenty of talent. Senior Josie Hickerson returns after finishing sixth in the all-around rankings at the state meet, including second on her floor routine.

“Floor is just different from all the other events,” Hickerson said. “You can actually tell a story and do a whole routine.”

Paris Spotted Tail, Ilaria Nichelatti, Eden Kingery, Beth Brandt and Klara Hinson will also be key members for the Lions. The depth of the varsity team sets LHS up for a chance to take home some hardware this season.

“We have a great squad across the board,” second-year head coach Michelle Seidner said. “I think focus is going to be our key.”

LHS will begin its season with a home quadrangular on Tuesday, Sept. 4.

The Lions have more experience than they did at this time last season.

Last year’s squad featured several newcomers during a 5-9-3 season, in which the team was eliminated in the first round of regionals. This season, Lawrence will have nine seniors on its varsity roster and it returns seven starters.

Senior midfielder Cole Shupert is one of the team’s top returners after getting honorable mention in the Sunflower League as a junior. Senior goalkeeper Ross Brungardt and junior defender Kanak Masten will also be crucial on the defensive end.

“Last year, we were characterized more by our individual players,” Schmidt said. “This year, we have more of a collective identity. We are returning so many starters and we have a really solid team.”

LHS was kept off the tennis court twice during the first week due to rain, but the team is ready to begin the season Thursday in a quadrangular at College Boulevard Activity Center.

The Lions, who have not had a state qualifier in the last two seasons, will have a brand new lineup after losing four seniors from last year’s varsity squad. Senior Caitlynn Kliem is one of three players returning with varsity experience.

“She has been a big component for us,” eighth-year head coach Chris Marshall said. “She played mostly doubles last year. We had an injury, and she stepped in and played singles for us even though that is not her strong suit. She’s a good player.”

Kliem had four different partners last year on the No. 2 doubles team, though she hopes to hold down the top spot in doubles this season. Sophomore Bella Kirkwood will also look to climb up the ladder after playing her freshman season as the No. 2 singles player for the Lions.

“I feel like I worked a lot over the summer and I think my strokes have definitely improved,” Kirkwood said. “My serve is something I need to work on still.”

The golf team continues to grow, as second-year head coach John Moos expects to have 14 golfers this season. It is a noticeable increase from nine golfers on last year’s team.

“It’s awesome to see more people get into the game of golf,” Moos said. “You don’t see that often. It is just a joy to see that.”

Senior Olivia Wallen is one of five players back with varsity experience from last season after qualifying for the state tournament in 2017. Wallen, who was the team’s only state qualifier, placed 88th in the event.

LHS also returns seniors Emily Johnson and Beatrice Lopez, who were the only two varsity golfers in 2015. Lopez has qualified for the state tournament twice, while Johnson went in 2016. Senior Ashley Dykes is also expected to be a key player this season.

“I just want to have fun and actually enjoy it,” Lopez said. “Sometimes when I am playing bad, I get in my head a little bit.”

Lawrence begins the season Wednesday at the Shawnee Country Club for the Jaguar Invitational.