Welcome to our new coverage of local high school teams 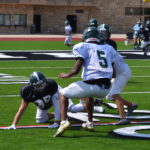 Junior quarterback Malik Berry attempts to get by a defender during Free State's watermelon scrimmage Saturday, Aug. 18, 2018 at FSHS.

Since the start of the fall sports season officially begins this week, I thought I’d take the time to formally introduce myself.

My name is Shane Jackson, and I’m the new high school sports reporter for the Lawrence Journal-World. I came to Lawrence in June after spending a year covering high school sports for the Manhattan Mercury — my first job after graduating from the University of Kansas in May 2017.

Earlier this month, I was finishing up my move from Manhattan to Lawrence and I stumbled on some old items from when I played sports in high school.

It reminded me of the joy I felt whenever I read my name in the local newspaper following a football game on Friday night. To be honest, I still get excited about seeing my byline. And that’s exactly why I enjoy covering preps, because I know what it means to see your name in the paper.

The Journal-World is going to start covering high school sports differently this year, and this article is the first example of that. I plan to publish three notebooks a week during the school year, which should run in the paper on Monday, Wednesday and Friday. All three notebooks will contain results and information about our local teams.

It’s no secret that the game recap is coming to an end at all levels. These notebooks will help us get all the results in, while spending our time sharing more compelling stories about the student-athletes.

When I go to games, I plan to write a story that goes deeper than just who won and who lost. It might take some time to get adjusted to this new coverage plan, and if you ever have any questions or story ideas, please send me an email or come talk to me at local games.

It took just one play for the Free State football team to display its firepower at its annual watermelon scrimmage Saturday.

On the very first play, junior quarterback Malik Berry hit senior receiver Keenan Garber on a slant over the middle. Garber, a Kansas State commit, proceeded to take it 60 yards down the middle of the field for a touchdown.

“Every time we run that 12 to Jax (Dineen), they bite on that,” Berry said. “We found a play to get Keenan open and it worked.”

Berry is entering his first season as the signal caller for the Firebirds, who went 10-1 last season before an overtime loss to Derby in the 6A quarterfinals. Yet, Free State, which averaged 43.1 points per game last season, doesn’t appear to have taken a step back on the offensive end.

On the second possession, Berry marched the Firebirds down the field before connecting with Garber for another score. Berry then threw a bubble screen to senior receiver LJ Mack on the third possession, and Mack sprinted down the sideline for a 55-yard touchdown.

After several possessions with the second-team offense and the freshman team, Free State finished the scrimmage with one more drive from its first-team offense. Berry found Mack on a 20-yard flag route for the last score.

“(Malik) is a really good athlete,” Garber said. “He’s always been top of his class. He played varsity as a freshman for us, so he has some experience under his belt. He’s just hungry and ready to get it.”

Still, head coach Bob Lisher believes the team’s potential on the offensive end will ultimately come down to the players up front.

Junior Turner Corcoran (back) and senior Shane Skwarlo (knee) were unable to participate in the scrimmage due to injuries. Both linemen are expected to be ready to go by the season opener against Olathe West on Aug. 31.

“Yesterday, I was very excited about how the offensive line looked,” Lisher said. “Today, I thought we could do better. That’s just part of it, and we will look at the film.”

This past week, Corcoran received two more scholarship offers from a pair of programs in the Southeastern Conference. Both Auburn and Georgia offered the four-star offensive tackle, who is the 11th-best prospect at his position in the Class of 2020 on Rivals.com.

Corcoran now has 16 scholarship offers from collegiate programs before the start of his junior campaign. In early August, Corcoran released his top-seven schools, which included Kansas along with Ohio State, Kansas State, Nebraska, Notre Dame, Oklahoma State and Oklahoma. 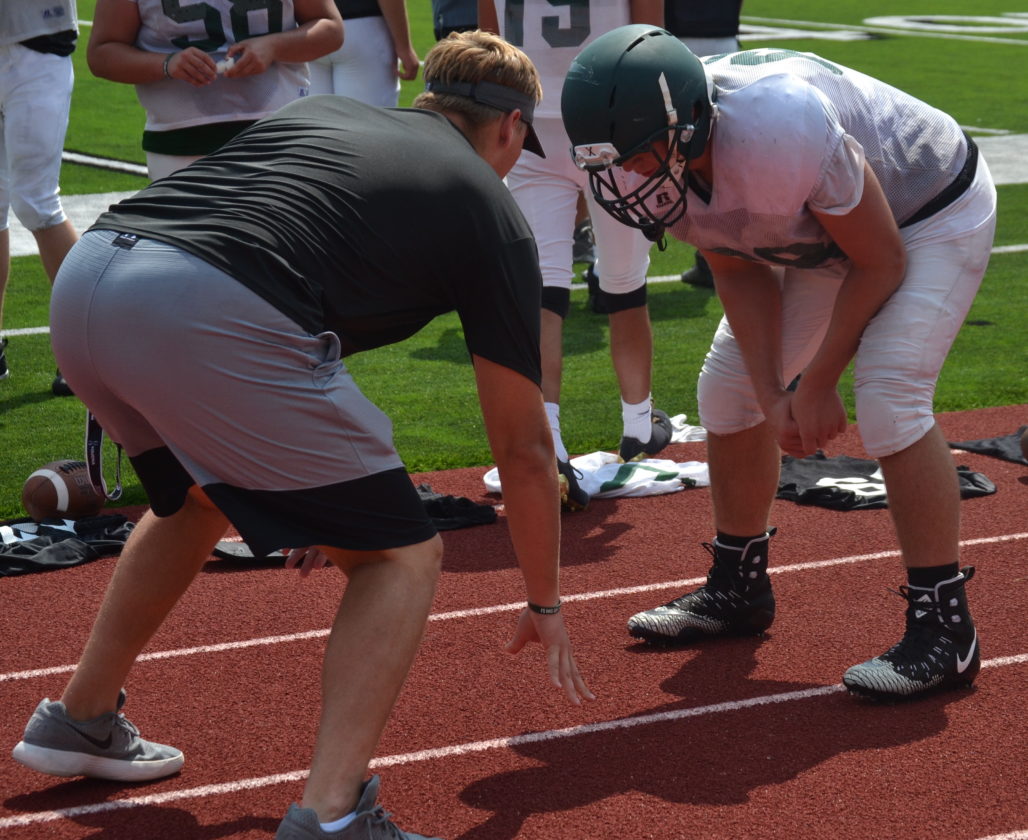 However, Corcoran admitted that his recruitment remains open and he plans to schedule a visit with both Auburn and Georgia.

“It was just as starstruck as all the other 14 were,” Corcoran said. “Georgia and Auburn are great programs. I’m going to have to keep other schools into consideration, but also keep the seven that I have out there.”

Steve Rampy now has a week under his belt in his first year as the head football coach of Lawrence High.

Rampy replaced Dirk Wedd, who coached the Lions for the last 19 seasons. Rampy spent the previous eight years as an offensive coordinator at Pittsburg State. Prior to that, he was a head coach at Blue Valley for 25 seasons. Rampy led the Tigers to four state championships and eight title game appearances.

LHS, which went 5-5 in 2017, begins its season on Thursday, Aug. 30, against Olathe South at the Olathe District Activity Center. Lawrence plays another game on Thursday in the fourth week of the season, as it faces Olathe Northwest on Sept. 20 at the College Boulevard Activity Center.

“The first (Thursday game) is not too much different, because we are going to be tired of practicing by the time we get to that week,” Rampy said. “The second week, you just have to adjust a little bit different. Our staff has to do a little more preparation in a condensed week.”