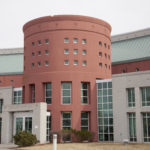 A feature left out as a cost-saving measure before construction started on the Douglas County Jail in 1999 now jeopardizes the key operating principle of “separating the sharks from the guppies,” Douglas County Sheriff’s Office correctional officials say.

Jails are designed around classification systems, which house inmates in specific units, or pods, based on their risk levels. At the county jail, male inmates are housed in minimum-, medium- and maximum-security pods. Inmates are given different privileges and subjected to varying levels of supervision in the three classifications. Because of the small population of female inmates at the time the jail was designed and built, there is just one catch-all pod for women.

The key to placing inmates in the right risk units is a classification pod, where the newly incarcerated are observed for 72 hours before being assigned to the appropriate pod, said Gary Bunting, Douglas County undersheriff for corrections, and Douglas County Sheriff’s Office Corrections Capt. Eric Spurling.

This is the fifth and final story in a series exploring the needs Douglas County Sheriff’s Office officials say are driving the proposed $30 million expansion of the Douglas County Jail. Past stories in the series:

The Journal World will continue to explore issues driving the proposed Douglas County Jail expansion, the county’s programs to divert inmates from the jail and the views of those opposed to the expansion.

Such a pod was in the current jail’s original designs but was eliminated as a cost-saving measure before construction started on the building that opened in 2001, Bunting said.

The proposed $30 million, 120-bed county jail expansion would address that need by adding a 28-bed male classification pod and 14-bed female pod. The expansion project, though, will require public financing, and likely will require some public convincing. Already some groups have expressed opposition to the idea, instead urging the county to focus more on reducing inmate totals and giving priority to building a mental health crisis intervention center, which the county also has proposed.

Without a classification pod, as many as 15 newly incarcerated male inmates are placed in the 56-bed medium-security pod for the 72-hour observation period, Spurling said. It’s an unsatisfactory arrangement because the “pre-class” inmates are kept separated from the medium-security inmates with whom they share the pod. Because pre-class inmates must stay in their cells while medium-security inmates enjoy time in the day room, correctional staff has less time to observe behaviors used to make security level assessments, such as interactions with other inmates and correctional officials.

The current arrangement also infringes on the privileges of the medium-security inmates, Spurling said.

“During the day, we have to stop and lock everybody back up in medium and let the pre-class out, even if it’s only two hours a day,” he said.

As with many issues at the jail, the classification concerns become more acute with the female population because there is only one female pod for all security levels. Adding the pre-class inmates to the crowded and mixed population curtails the already limited outside-the-cell time female inmates are allowed, Spurling said.

Adequate observation time is important for the inmates’ well-being, too, Spurling said. Signs of mental health crisis often manifest in the first 72 hours, and it is a time when the threat of suicide attempts is heightened as inmates adjust to incarceration while perhaps dealing with drug withdrawal or hangovers.

With both men and women, the lack of a classification pod contributes to the jail’s overall overcrowding and the need to transfer inmates to jails in other counties (at a cost of $1 million in 2016), Spurling said. Pre-class inmates do not have roommates, meaning they can displace two medium-security inmates, he said. Those displaced inmates are either transferred to other counties or get a “downward classification” to minimum security.

At the same time, lack of cells in the maximum-security pod forces correctional officials to classify some inmates downward to the medium security pod.

“The classification system has a hard time functioning when we are overcrowded,” Spurling said. “Classification becomes less a factor, and we start housing people where we have space.”

The proposed jail expansion plan would also make ground-floor alterations that Bunting and Spurling said would increase the jail’s efficiency and safety. The proposed design would build a new sally port, an enclosed drive-thru area in which inmates enter and leave the jail, off the existing one. On busy weekend nights, it is not unusual for law enforcement officers to become stacked up in the existing sally port, trapping police vehicles as their drivers wait for officers parked in front and behind to finish their business.

“Those officers stuck in the middle will get calls they need to respond to in the city or out in the county,” Bunting said. “We’re looking to have angle parking. There will still be times when cars will be waiting outside. But once inside, they will be able to leave at any time.”

The plans also would swap the locations of the jail’s current medical bay, which is now usually full, and booking area, so that the sally port would enter directly into booking with the latter unit expanding into the existing sally port. The proposed design would allow more beds in the medical unit and more temporary holding cells in booking.

The design also would provide an area with computer stations where law enforcement officers could complete necessary processing on arrests before heading back to the street, Bunting said.

“It will enhance the safety of the facility and the community,” he said.