2017 to be year of decision on Douglas County Jail expansion; a look at current plans 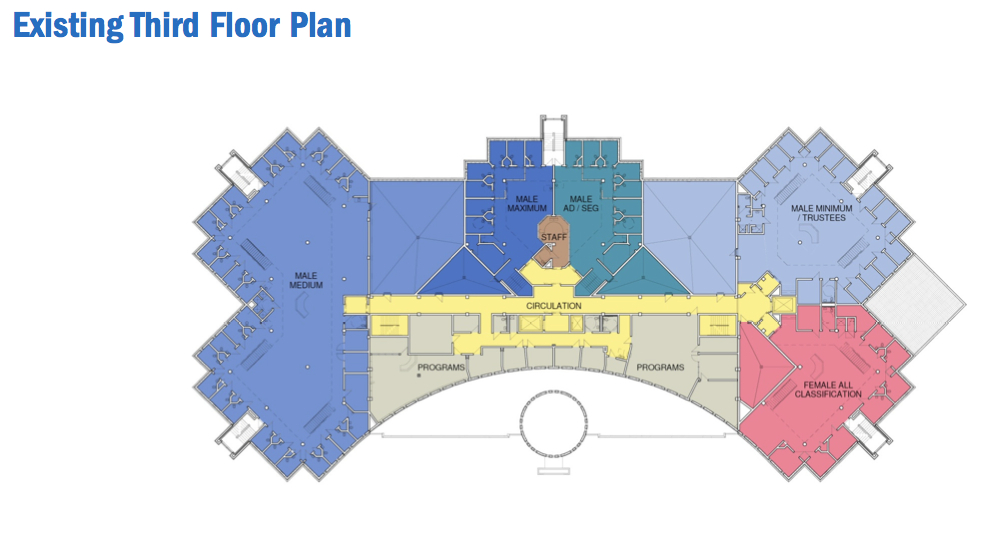 If there is one certainty for Douglas County government in 2017, it’s that the proposed expansion of the county jail will be the dominant issue.

Twelve months ago, it appeared 2016 would be the year of decision for the proposed expansion of the Douglas County Jail. In January, Treanor Architects shared preliminary footprints and conceptual renderings for an estimated $30 million building project that would add 120 beds to the 186-bed facility that opened in 2000. At that time, it was the Douglas County Commission’s goal to put a referendum before voters in November on a bond issue to build the jail expansion and a Mental Health Crisis Intervention Center.

However, the County Commission decided in April that a November referendum would not give the then 1-month-old Criminal Justice Coordinating Council time to review the county’s criminal justice system and those of its partner agencies. The group is studying, among other issues alternatives to incarceration that could impact the size and scope of the jail project.

It will now be the next County Commission who will make the decisions of if the jail expansion goes forward, what it would look like, how any bond issue would be presented and when. In January, newly elected 3rd District Commissioner Michelle Derusseau will join Mike Gaughan and Nancy Thellman on the commission.

Gaughan, who represents the County Commission on the coordinating council, said he assumed the County Commission would put before voters a proposal much like the one in the plans Treanor presented in January, from which the firm is now working to develop more detailed plans. The jail expansion remained important to him and necessary, as is the crisis intervention center, he said. 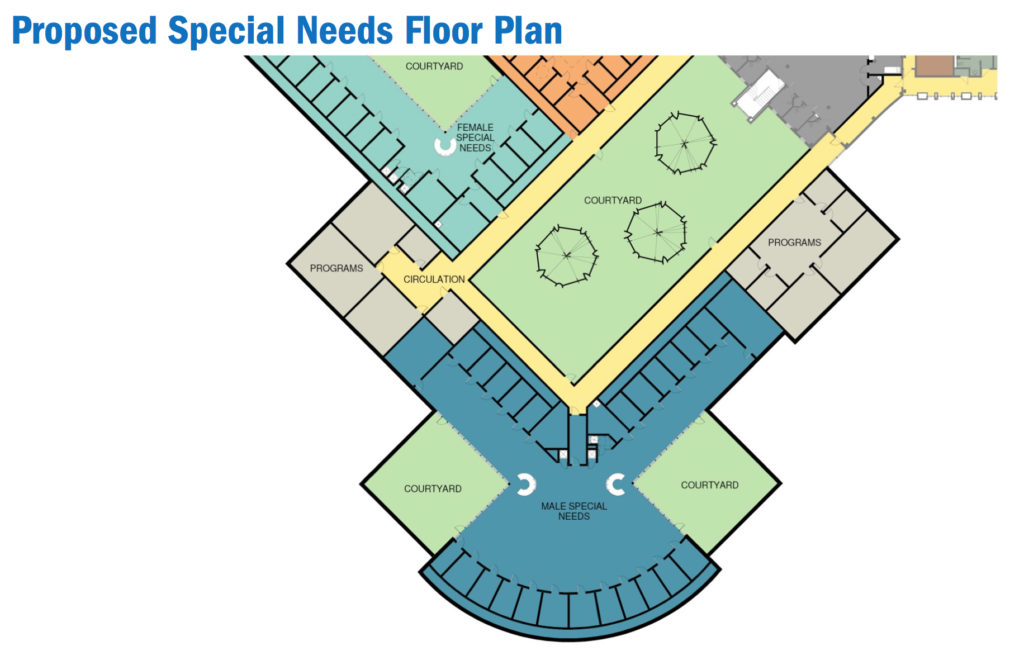 The plans Treanor Architects developed for the Douglas County Jail would build male and female mental health pods on the facility's ground floor. The design incorporates the calming features of natural light and an open-air courtyard. 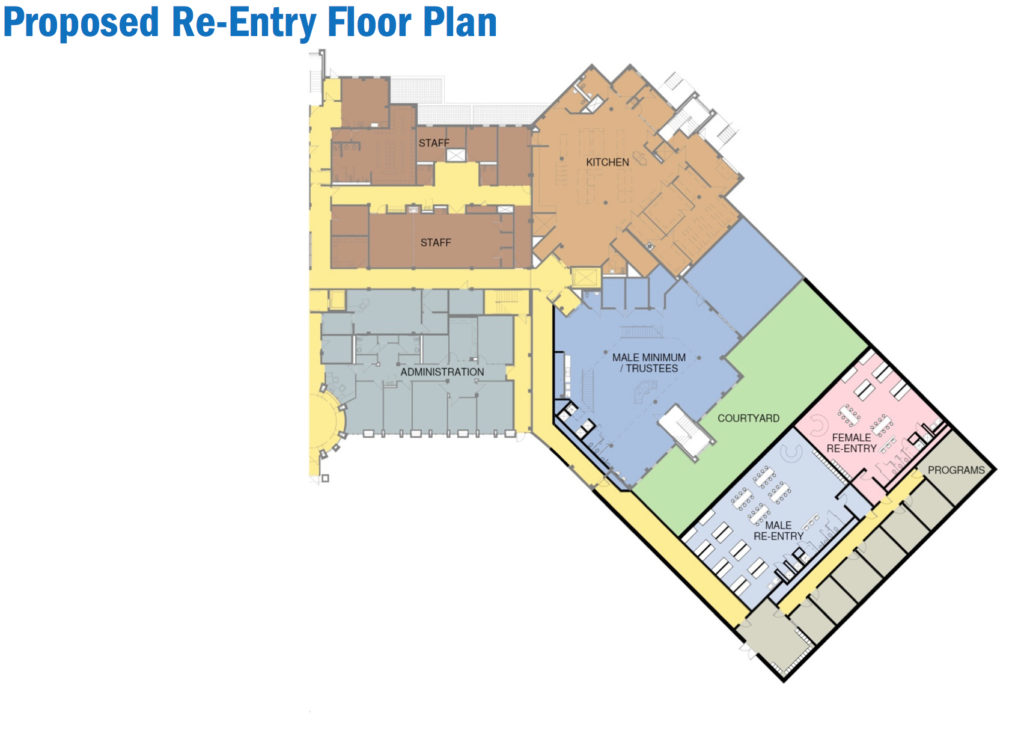 The plans Treanor Architects released in January for the Douglas County Jail would build male and female pods for the jail's re-entry/work release programs. Re-entry inmates would be housed in dormitory-type settings with access to an open courtyard.

“I would say this in an issue we’ve been working with the sheriff and the team out at the county jail for three years now,” he said. “Part and parcel with that is the continued work of the coordinating council to see what new initiatives we can take to divert away from the jail. That’s where the coordinating council comes in to play, so that we have a justice system in Douglas County that our citizens can be proud of.”

He hadn’t talked with Derusseau about the jail expansion, but said any decision on the issue would come after she indicated she was ready to vote on a proposal, Gaughan said.

Any bond referendum to build the jail will almost certainly have to overcome organized opposition. The interfaith coalition Justice Matters released a position statement in the week before the November general election calling for spending on jail planning to end, the county to move forward immediately with the crisis intervention center and hiring of the Vera Institute or the Justice Management Institute to work with the coordinating council to identify incarceration alternatives.

Justice Matters is also associated with the informal group, Douglas County for Jail Alternatives, which has received logistical support for the meetings it has held the last six months from the Kansas Appleseed Center for Law and Justice. Benet Magnuson, Appleseed executive director, said a complete data driven review that studies alternatives to incarceration was a more humane and effective way to deal with jail overcrowding than a building program.

In other jurisdiction the implementation of reforms identified in comprehensive reviews have significantly reduced jail populations, Magnuson said. He points to Johnson County’s responses to overcrowding at its juvenile corrections facility. The neighboring county built what he said was one of the nicest correctional facilities he has ever seen. However, that facility is now empty because Johnson County also conducted a comprehensive review of juvenile justice reforms and now has only a handful of juveniles incarcerated.

“I sure would want to build a jail after a comprehensive study, rather than before,” he said.

In anticipation of the coming debate, the Lawrence Journal World in the coming weeks and months will examine the current challenges at the jail from overcrowding and how the jail expansion would address them, review of the reforms and programs the county already has in places, plans or is studying to reduce the jail population and look of the proposals and alternative solutions critics of a jail building program propose.

The plans Treanor Architects presented in January and is now refining would:

• Build dormitory type settings for the male and female re-entry programs, including work release, of 28 male and 14 female beds.

• Add a ground-floor 28-bed male and 14-bed female mental-health pods The pods would include therapeutic calming features of natural light and a shared open-air courtyard. The new male mental-health pod would also free up 14 beds in the male segregated and special needs inmates in maximum security.

• Relocate the jail’s booking to its current sally port (the drive through area in which inmates enter the jail or are transferred from it). The sally port would, in turn, be relocated to just off the new booking area.

• Relocate the jail’s medical unit to the current booking area.