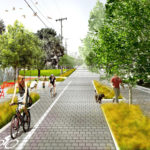 An idea for a neighborhood mural is shown in this rendering from the September 2015 East Ninth Complete Street document.

The Lawrence City Commission will provide guidance Tuesday on the street reconstruction plan for a new arts corridor — a document that’s being called the first “broad stroke” in the design phase for the East Ninth Project.

Commissioners have been asked to review the 87-page concept plan, but they will not take formal action on it.

“With the receipt of that, they [designers] move into more formal design development,” said Porter Arneill, the city’s director of arts and culture. “They’ll take that information they’ve gleaned from visiting with people and start really getting down to what can they really do.”

The East Ninth Project, which was first developed as an idea in 2012, aims to integrate public art into the seven blocks between Massachusetts and Delaware streets along with city-funded improvements to the street and walkways.

The project was kick-started in June 2014 when the Lawrence Arts Center won a $500,000 ArtPlace America grant.

The city will provide the rest of the project funding. According to the city’s website, the total cost is estimated at approximately $3.1 million, though the actual amount will not be known until the design is complete and contracts are in place.

The concept plan the commission will review Tuesday was put together by Kansas City-based urban design team el dorado inc., along with engineers and artists.

The document is titled the “Complete Street Concept Plan.” “Complete Street” is a term used to describe a design approach in which streets are planned for all ages, abilities and modes of transportation.

The plan calls for narrowing the street to 28 feet total, with two 10-foot driving lanes and two 4-foot bicycle lanes. Currently, Ninth Street is 30 to 50 feet wide in the seven-block corridor.

The narrower street will cause drivers “to slow down to a neighborhood speed and peacefully co-exist with bicycle traffic,” the plan reads. The document also says narrower streets will allow for more green space in the public right-of-way that can be used for small gathering areas or “edible public landscaping.”

The next step in the design phase is determining what “neighborhood moments” to include in the final development.

“As a project, East Ninth seeks to preserve and celebrate what is special about this street: its character, its history, and the many urban ‘moments’ that comprise one of Lawrence’s most vital neighborhood corridors,” the plan reads.

Ideas for extra spaces along the street include a public orchard, extended patios, gathering areas and a bike corral.

Jarrett Mellenbruch, one of the artists commissioned for the project, is suggesting a neighborhood “front porch” for East Ninth Street to be located in the yard just north of New York Elementary and east of St. Luke AME, between New York and New Jersey streets.

Feedback about the current plan has been documented.

The draft, dated Sept. 4, has been reviewed already by the project’s citizens advisory committee, the East Lawrence Neighborhood Association and the Lawrence Cultural Arts Commission.

According to a timeline for the project on the city’s website, after the plan goes through the City Commission on Tuesday, a team will crystallize the design concept and take it back to those other bodies before commissioners see it again in December.

A public presentation of the design is planned for January.

“I believe that successfully complete, this project will be a model to invite artists and designers at the beginning of the process to work with engineers,” Lawrence Arts Center CEO Susan Tate said. “Lawrence can truly be one of the most forward-thinking places in the country.” 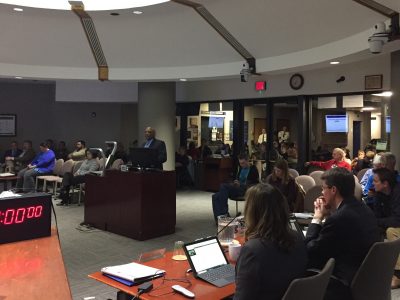