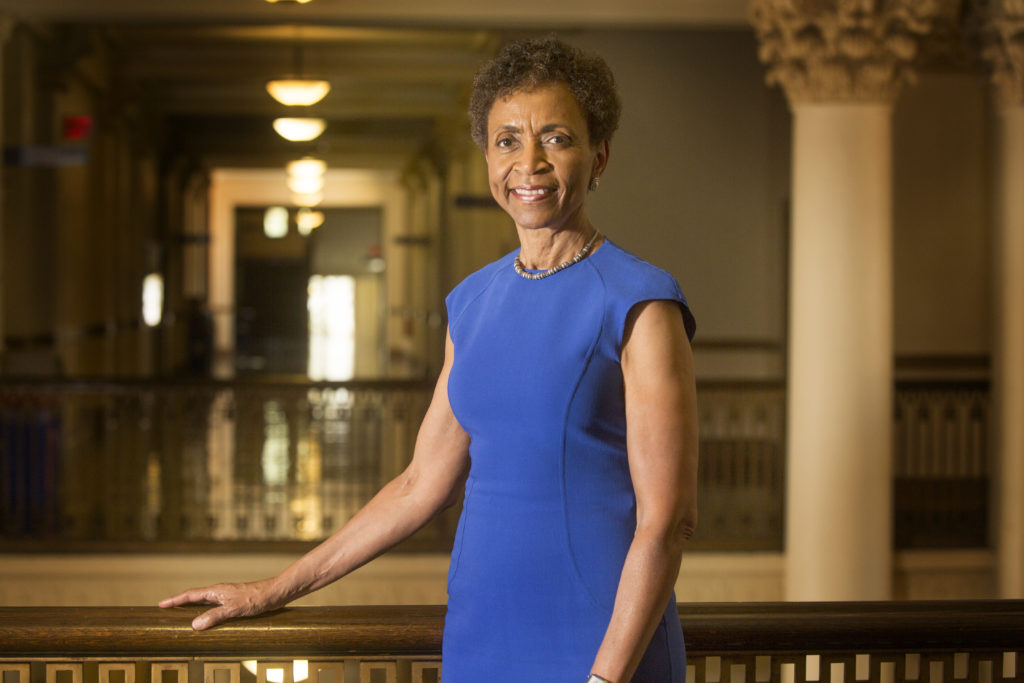 Hiring a new provost and addressing campus concerns about race are among the Kansas University chancellor’s top priorities right now.

The Journal-World recently sat down with Chancellor Bernadette Gray-Little to talk about these and a few other important issues at KU.

On the provost search

Provost Jeff Vitter, second in command for KU’s Lawrence campus, is leaving KU to become chancellor of the University of Mississippi. 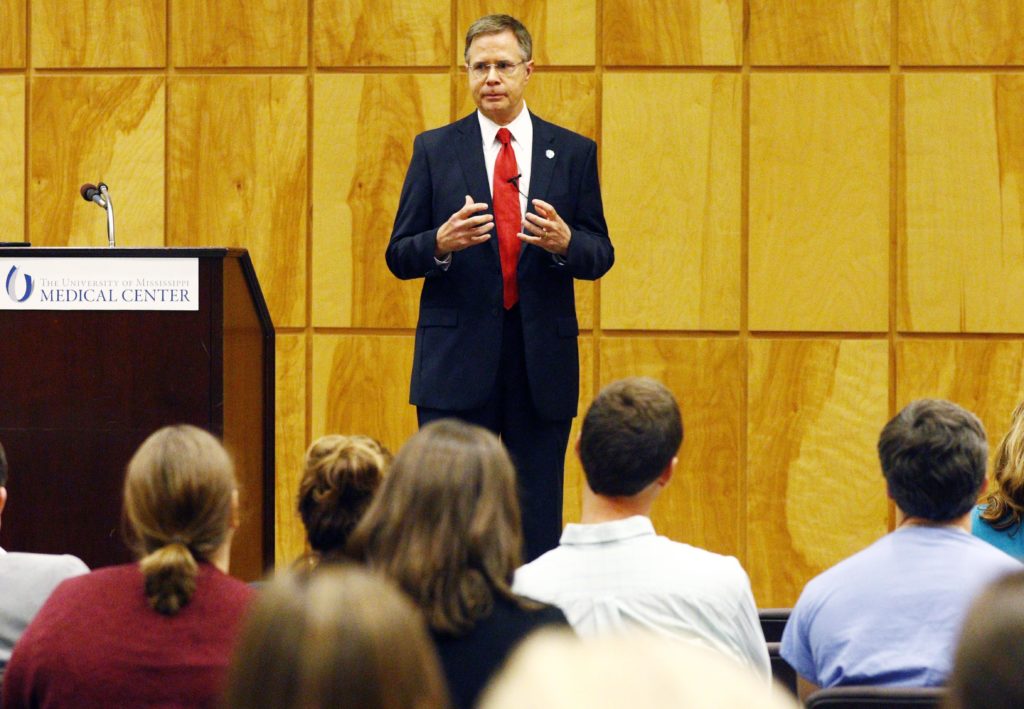 Gray-Little said it’s expected to take six to nine months to hire a new provost. She announced the search committee — chaired by Steve Warren, professor and investigator in the Life Span Institute — and search firm, R. William Funk and Associates, on Wednesday.

The position will be open to internal and external candidates, Gray-Little said, and common contenders for provost positions are deans, vice provosts and senior faculty leaders. She declined to say whether KU was targeting any particular internal candidates.

“I don’t know who is going to apply, but it will be a national search,” she said.

Gray-Little, who was 64 when KU hired her in 2009, did not share any information about when she plans to retire. But she said that’s a conversation she’ll probably have with provost candidates.

“I expect it to be a question that they will have,” she said.

Gray-Little said she does not think her retirement timeline will hamper the hiring process.

“Will I expect that we can hire someone good if they don’t think I’m going to be here for a long period of time? The answer is yes, I think we can get some good candidates,” she said. “I think it’s an attractive position.”

Gray-Little said KU will look for a provost with good management skills, a commitment to academic quality and who shares “the values of the university.”

Being capable of, and invested in, moving KU forward on the issue of diversity is extra important now, Gray-Little said. “While that’s almost always part of the job description, I think that will have heightened scrutiny.”

Gray-Little moderated the at-times heated discussion, including through comments by a group who yelled over her on the microphone and several students who were directly critical of her. 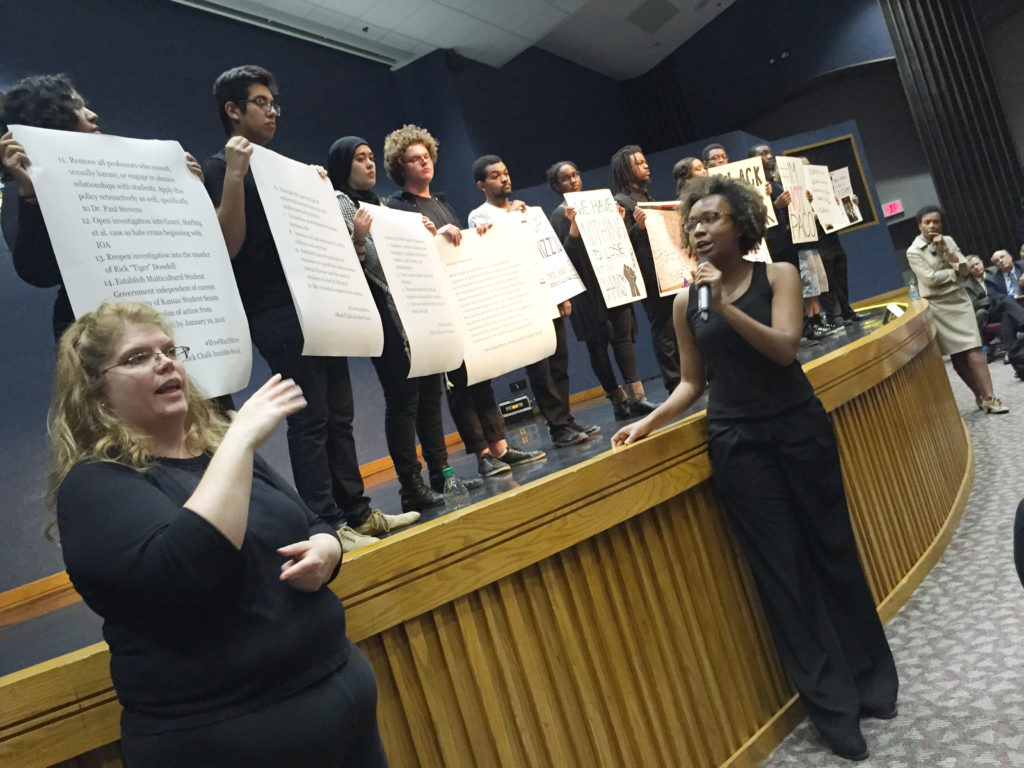 Gray-Little said she wasn’t interested in making the event an argument or denying anyone’s opinions.

“It’s important that we are, and are seen to be, responsive in specific ways,” Gray-Little said.

Retention is one key issue, she said, and the gap between retention rates for black students and all other students has been cited as an extra concern.

“There are a lot of things people do that seem like good ideas that turn out not to have any effect. And maybe you have to do them to find out, but you should find out and you should be looking for things that have been shown to make a difference,” she said. “I would like for us to do the best job that we can to implement something that has a reasonable chance of making a difference, and is not just window-dressing.”

Gray-Little said KU has been involved for the past two years with a coalition of 11 universities called the University Innovation Alliance. Its mission, according to its website, is to “create a playbook of proven innovations to help students from all family backgrounds graduate.”

“With the University Innovation Alliance, the goal really is to erase the discrepancies in retention that you find based on income level, being first-generation or ethnic minority,” Gray-Little said. She said the group aims to identify strategies that are actually proven to work, then seek money from private foundations and federal government programs to pay for them.

The alliance recently received an $8.9 million U.S. Department of Education First in the World grant to conduct a four-year research study across its campuses to evaluate the effectiveness of advising in increasing retention and graduation rates for low-income and first-generation students.

More immediately, the provost’s office announced last week that it was forming a Diversity, Equity and Inclusion Advisory Group co-chaired by athletics director Sheahon Zenger and associate professor and African and African-American Studies department chairman Clarence Lang. The task force is envisioned to lead the effort toward goals including a diversity strategic plan, diversity training for KU students and employees, incorporating diversity into curriculum and recruiting and retaining students from marginalized groups.

KU, like many entities across the state, will continue to keep an eye on the state budget, Gray-Little said. 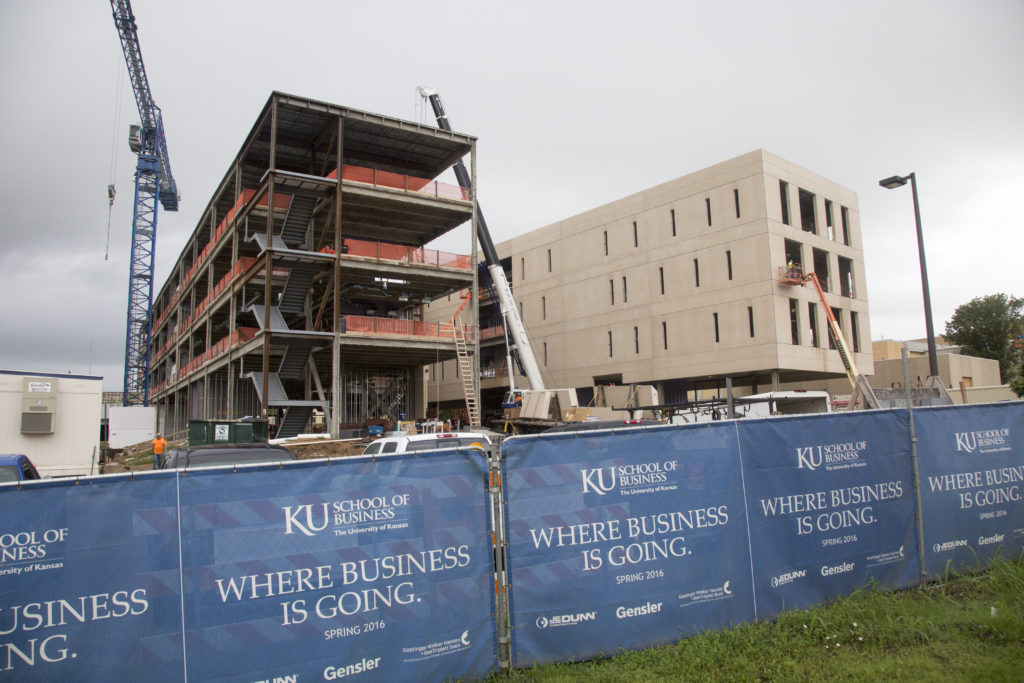 Pictured in June 2015, Capitol Federal Hall, the new KU School of Business building, is going up on Naismith Drive across from Allen Fieldhouse. Construction is slated for completion in spring 2016, and the 166,500-square-foot building will open for classes by fall. The total project cost is 0.5 million, with the 0.5 million construction cost coming from private funds.

“We will be looking to what happens with the budget and how the lowered tax collection will be dealt with in the future,” she said. “That is very important for us, just as it is for the other universities, because it affects what we plan to do, what we can do.”

Oswald/Self Hall on Daisy Hill and McCarthy Hall next to Allen Fieldhouse both opened this fall, as did the new engineering expansion building known as LEEP2. Capitol Federal Hall (the new School of Business building) will be done in 2016.

Construction on the Earth Energy and Environment Center and the new Health Education Building at KU Medical Center in Kansas City, Kan., is just underway.

Earlier this month the Kansas Board of Regents approved KU’s $350 million Central District redevelopment plan, which will bring a new science building, a new Burge Union, two new residential buildings and other projects.

“That’s large, that’s visible, that’s ongoing, and in many ways the campus is being transformed physically,” Gray-Little said.

Though names have not been announced KU has extended offers to two more Foundation Distinguished Professors, Gray-Little said, which would bring the total hired to 11.

Gray-Little said she thinks KU will hire all 12 Foundation Distinguished Professors by the end of this academic year. The state-funded effort aims to recruit 12 “eminent” scholars to support the university’s four strategic initiative themes.

Gray-Little added that KU Medical Center also has hired multiple new deans in recent months, and so has the Lawrence campus.

She said those positions illustrate the ongoing importance of recruitment and hiring of faculty, staff and administrators.

“That whole process of how you get the people here we need and want is maybe the most important thing we do as a university,” Gray-Little said.