President Obama drops in on Lawrence preschool before speech 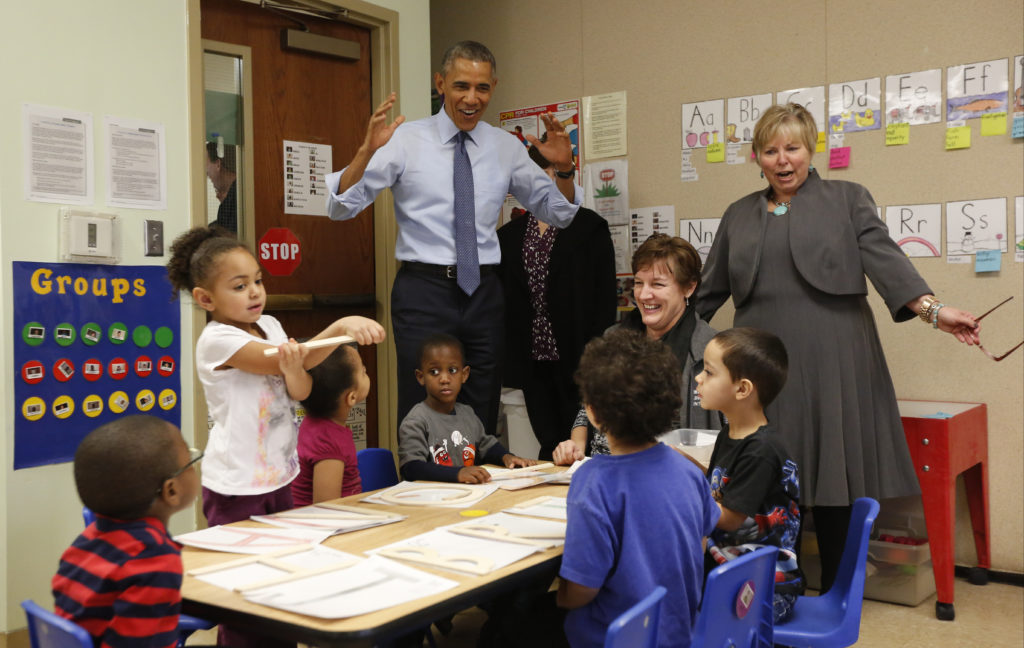 President Barack Obama introduced himself to preschoolers at the Community Children's Center preschool at Plymouth Congregational Church during a visit on Thursday, Jan. 22, 2015 in Lawrence, Kan. President Obama visited Lawrence and Kansas University to outline some of his themes delivered during his State of the Union address on Tuesday, Jan. 20.

Toddlers at the Community Children’s Center preschool in Lawrence started becoming curious Thursday morning when, in the middle of their normal activities, a phalanx of reporters filed into the room.

“They have cameras,” one little girl observed. 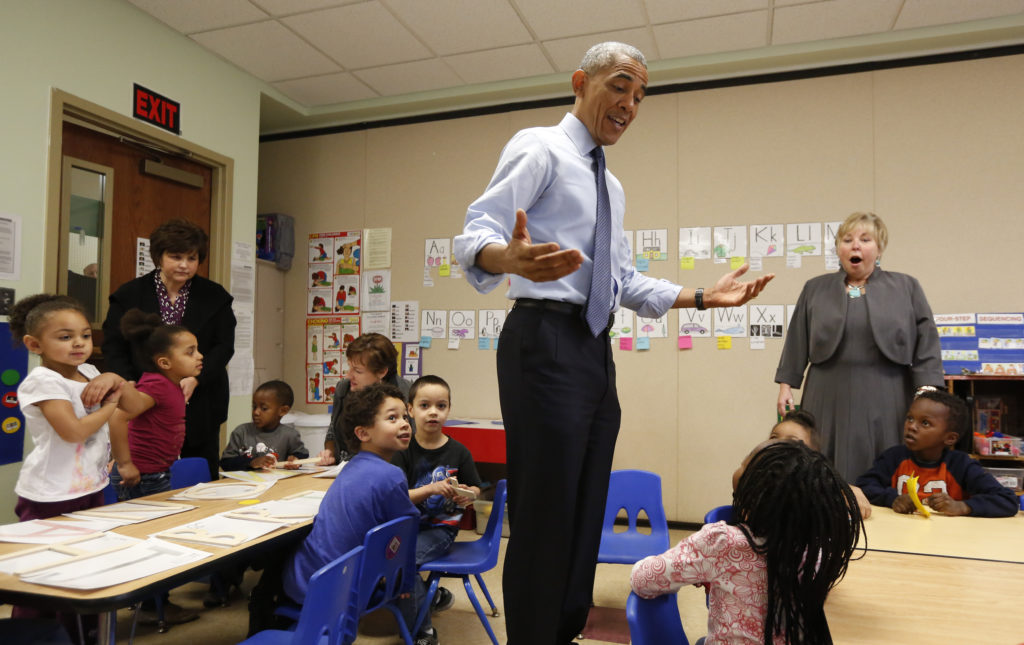 President Barack Obama introduces himself to a preschooler named Michelle and tells her that he also knows someone named Michelle, at the Community Children's Center at Plymouth Congregational Church in Lawrence, Kan on Thursday, Jan. 22, 2015 . President Obama visited Lawrence to outline some of his themes delivered during his State of the Union address on Tuesday, Jan. 20.

One of their teachers reminded them that a “special visitor” was coming that day. A few minutes later, the door opened and the president of the United States walked into the room, saying, “Hello everybody.”

But even in a room full of preschoolers, the President Obama couldn’t go unrecognized.

And the president made an immediate connection with another girl when 4-year-old Michelle Yemba, daughter of Boniface Yemba and Sylvie Paluku, introduced herself.

“You know, I know a Michelle,” the president said. “One of my favorite people is named Michelle.”

It’s a time-honored tradition for politicians to enhance their family-friendly images by surrounding themselves with cute children. But this particular stop on Obama’s visit to Lawrence was about more than just a photo opportunity. It was about drawing attention to one of the central themes he would later discuss in his speech at Kansas University: expanding access for working-class families to child care and early childhood education.

“I want to make sure we’ve got universal child care to preschool for all,” Obama said in his speech. “It’s the best investment we can make. It is the right thing to do. We can do more to help families make ends meet.”

The preschool was the Community Children’s Center, housed at Plymouth Congregational Church, 925 Vermont St. It’s one of the longest-operating Head Start preschools in the country.

The White House called the center “a model of the high-quality early education” that Obama says should be available to all children in the United States. It has small class sizes and provides extended-day services from 7:30 a.m. to 3 p.m. as well as “wrap-around” supports such as health evaluations and family consultations.

But it’s also a program that suffered a setback in 2013, when a budget stalemate between the White House and Congress resulted in automatic budget cuts known as sequestration. Head Start programs in Lawrence lost $17,000 in federal funding through those cuts, forcing it to close one preschool site at Edgewood Homes, 1600 Haskell Ave., and consolidate services at Plymouth Congregational.

“We are proud of the fact that the church stepped up to the plate and found extra money to pay for Head Start when those funds were sequestered because we felt so, so committed to this program,” said pastor Peter Luckey. “We were just really chagrined that the sequestration happened and that children and families that are marginalized and vulnerable in the community were going to be adversely affected by it.”

In his budget message to Congress this week, Obama said his goal is to ensure universal access to child care assistance for all eligible families within 10 years.

That would involve expansion of the federal Early Head Start-Child Care Partnerships program, which targets children age 3 and younger; increased funding for federal Child Care and Development Fund, which subsidizes child care for low- and moderate-income families; and increasing the duration of Head Start to a full school day and year.

“This is something the church feels very deeply about,” he said. “And this has been the central core of our mission since 1966 — to provide this program for low-income families.”