Obama at KU: Some university community members came for the issues, others for the show 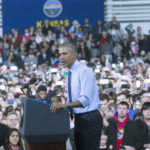 President Barack Obama delivers a speech Thursday, Jan. 22, 2015, to a crowd gathered inside the Anschutz Sports Pavilion on the campus of Kansas University.

To be sure, President Barack Obama’s star power was the driving force behind many Kansas University community members who flocked to see him speak Thursday on campus.

But plenty of students, administrators and professors were there for the issues, too.

Obama’s “middle class economics” themed speech — the phrase emblazoned on a blue banner behind the podium inside Anschutz Sports Pavilion — reiterated initiatives he pushed Tuesday in his State of the Union address.

Some of those were college-specific.

Also included in Obama’s remarks was the need to support research, which Gray-Little said also is important to all of KU’s campuses.

William Elliott, associate professor of social welfare and director of KU’s Assets and Education Initiative, has written extensively on the value of relying on assets to pay for higher education instead of loans.

“We all grow up believing that work and effort should lead to outcomes we can achieve,” he said. “That’s really at the core of what it means to be an American.”

Elliott isn’t so sure.

He’s concerned steering more low- and middle-income children to community college could simply reinforce a “two-tier system.” It could also hurt enrollment at state colleges like KU, where high-achieving but low-income students who do go to college usually would end up.

Elliott also sees bailing people out of student debt as a short-term fix, at best.

In line with his research, Elliott said, such initiatives should not be in place of programs that help students start saving on their own earlier.

“In order to keep up in this world, everyone has to have access to knowledge,” Grant said. “I think it just bridges the gap.”

Sophomore Asad Morani said he, too, thinks such a program could help people get a foot in the door toward higher education.

“I know a lot of people that need a way to get involved in education, but they don’t have financial ways,” he said. “It just gives a chance to people that really don’t have that many resources.”

Of all his State of the Union initiatives, however, the president made affordable child care the theme of the day during his visit to Lawrence.

He visited young children at a Lawrence Head Start program prior to his speech. Alyssa Cole, a KU student and single mom of three who wrote to Obama about the need for affordable childcare, introduced the president at Anschutz. And he spent a significant amount of time talking about the issue during his speech.

Gray-Little said finding affordable care is a hardship for some students as well as faculty and staff at KU.

“It is an issue that is important at universities, and it’s certainly one that we’ve had conversations with some of our faculty and students about this year,” she said. “It’s a continuing conversation, and a continuing challenge.”

KU has an “excellent” on-campus child care facility in Hilltop Child Development Center, Gray-Little said, but it’s not large enough to meet demand and it’s too expensive for many students, even with efforts to keep the cost down.

“The difficulty is affording quality and how you pay for that, that’s really the question,” the chancellor said.

Plenty of students in the star-power camp cared less what Obama was going to talk about than just seeing him — live and in person.

Saleh Alameri, a freshman from United Arab Emirates, was one of those.

“You don’t always get a chance to see the president,” Alameri said. “I’d rather seize the moment then try to fly away. This is a golden opportunity for me.”