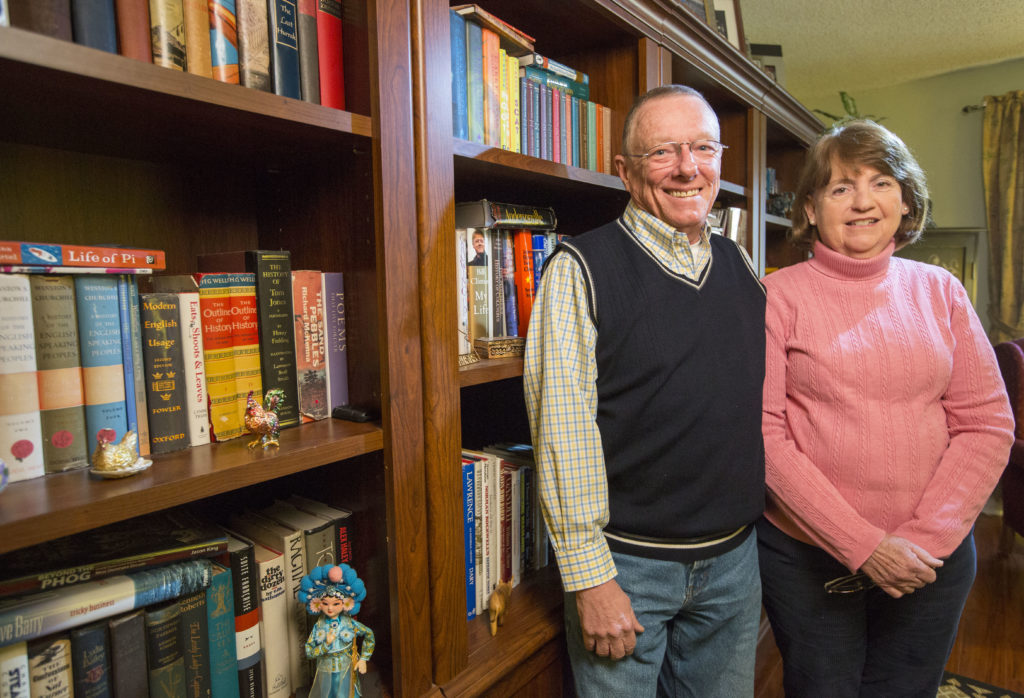 Malcolm Gibson, retired Kansas University journalism professor, and his wife, Joyce, at their home in West Lawrence on Sunday.

Malcolm Gibson, a retired Kansas University journalism professor, is a self-proclaimed “Africanist.” He traveled to the continent in 1969, ’71 and ’93. He climbed Mount Kilimanjaro in Tanzania, interviewed Nelson Mandela in Johannesburg and hitchhiked over much of east Africa, finding stories along the way.

Starting next month, Gibson will fulfill a lifelong dream of living in the place that he has studied, traveled and adored.

“It’s a big task, but I’m looking forward to it,” Gibson said. “I’ve been in love with Africa my whole life. When I’m there, a comfort comes over me and I feel at home.”

The position became known to Gibson in August, when a longtime friend and employee of Nation Media Group encouraged him to apply. Gibson was offered the job in December and traveled to Uganda earlier this month to visit the newsroom, meet his future staff and finalize his contract.

Gibson and his wife, Joyce, will leave for Uganda on Feb. 20.

The Daily Monitor, Uganda’s leading independent daily newspaper, is perceived as favoring the opposition, Gibson said. While there, he hopes to temper bias and add balance.

“In the world of journalism outside the U.S., most publications do have a perspective, and journliasts tend to inject themselves in there,” Gibson said. “I’m not going to make it an American newspaper; it needs to be truly Ugandan. But I am going to insist that the stories be far more balanced.”

As executive editor, Gibson will lead the publications in coverage of Uganda’s national election, something he says will be an intense, sensitive situation.

Because, unlike journalism in the United States, Gibson says, there are risks. According to BBC News, Ugandan authorities shut down the Daily Monitor last spring after it published a letter alleging that President Yoweri Museveli was grooming his son to succeed him.

“Journalism is easy here. It’s not easy there,” Gibson said, noting the shutdown. “That’s one of the things drawing me there.”

After two years at the position, Gibson hopes a Ugandan, and not another American, will take over the operation.

“Everything I do is going to be looking at long-term,” Gibson said. “If I can leave from there knowing I may have helped a little bit, then I will feel that it’s been a success.”

In Uganda, Gibson will rely on current staff to advise him on the country’s culture. And, though he knows Swahili, Gibson will work to learn Luganda, a local language.

Gibson earned a Bachelor of Arts in African Studies in 1977 and a master’s degree in Mass Communications with an emphasis in international journalism in 1994, both from the University of Florida. He worked for 34 years as a newspaper reporter, editor and news executive, and taught at KU for 17 years before retiring last year.

Though Gibson retired from KU in May 2013, he continued to teach classes last fall, and he planned to teach this spring. A visiting professor will take over his classes and live in the Gibsons’ home.

Joyce, a librarian and media assistant with Lawrence Public Schools, is in the process of retiring before leaving for Uganda. For the next two years, she plans to volunteer with local schools, explore Africa, and keep a daily blog.