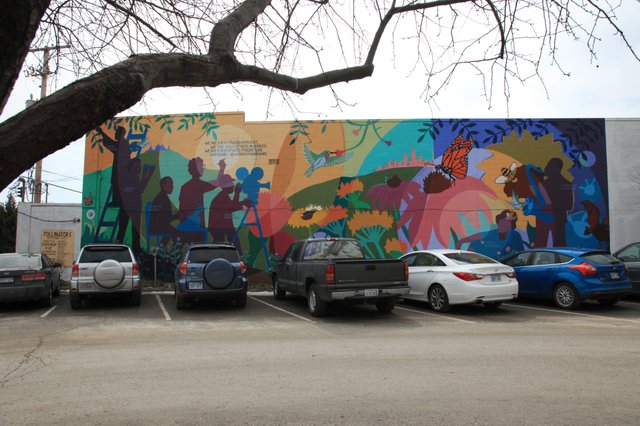 Spencer Museum of Art and a Lawrence-based development group tentatively agreed to have artist Dave Loewenstein recreate his Pollinators mural. The building that it's currently on is scheduled to be torn down and a multi story building will be built in its place.

A deal is in the works to recreate a popular downtown mural at Ninth and New Hampshire streets, although in a significantly smaller form.

Lawrence city commissioners at their Tuesday evening meeting were told the Spencer Museum of Art and a Lawrence-based development group had reached a tentative deal that would allow local artist Dave Loewenstein to either recreate or refashion the popular Pollinators mural on the wall of a new multistory building slated for the northeast corner of Ninth and New Hampshire streets.

But leaders with Kansas University’s Spencer museum conceded the new artwork would be about half the size of the current mural, which is on the wall of a building that will be torn down to make room for the new seven-story apartment/office building.

Susan Earle, curator for the Spencer, said design details for the new mural hadn’t been finalized. She said Loewenstein’s new work probably wouldn’t be a copy of the Pollinators, which honors several Black artists who have roots in Kansas. But she said the new work certainly would be true to the spirit of the original work, which was created in 2007 as part of an exhibit on famed artist Aaron Douglas.

KU leaders also said they will be seeking an unspecified amount of city funding for the new mural. The development group — which is led by Lawrence businessmen Doug Compton and Mike Treanor — has agreed to pay $20,000 toward the mural project. Spencer officials are estimating the project will cost about $50,000.

Commissioners took no action on the mural but asked both parties to bring back a signed agreement on the issue.

Commissioners did unanimously approve an incentives package for the apartment/office building, which is expected to add 114 apartments to downtown. The project will receive a property tax rebate — or tax increment financing — of about $5 million over about a 20-year period to help pay for the building’s private parking garage and other infrastructure.

Commissioners backed away from proposed wording in the incentive contract that would have given future City Commissions broad authority to revoke or modify the tax incentives, if businesses in the building were creating a nuisance. The proposed language was in response to concerns about alleged alcohol violations at The Cave, a nightclub in The Oread hotel that receives similar tax breaks.

Members of the development group said the last-minute language could jeopardize the project’s financing. Commissioners said the apartment project was important to downtown and agreed to remove the language. But commissioners also directed the city’s Public Incentives Review Committee to study how appropriate language could be added to future projects to better protect the city’s interests.