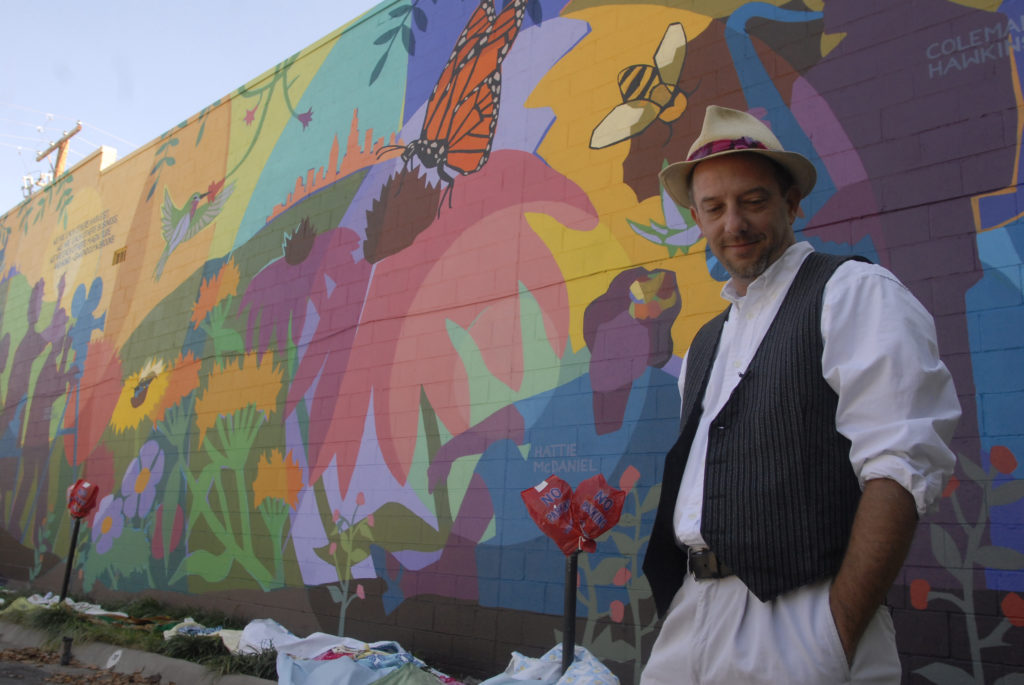 Before developers can start construction on a seven-story, downtown apartment building, city commissioners want them to deal with a more ground-level problem — how to save a prominent mural on a building slated to be demolished by the project.

Commissioners directed a development group led by Lawrence businessmen Doug Compton and Mike Treanor to have discussions with interested members of the arts community about how a 2007 mural by noted Lawrence artist Dave Loewenstein can be saved near the northeast corner of Ninth and New Hampshire streets.

“It really is an important piece of art for the entire state of Kansas,” Susan Earle, curator at Kansas University’s Spencer Museum of Art said of the piece, which is entitled Pollinators, and features seven black artists who have ties to Kansas.

The art museum commissioned the mural in 2007. Earle said the museum has had preliminary discussions with the development group about saving the approximately 20 by 80 foot mural.

The mural is on the northern wall of the former Black Hills Energy building at the northeast corner of Ninth and New Hampshire streets. The building could be torn down later this year to make way for a 114-unit apartment building.

Commissioners at their weekly meeting stopped short of saying they would require the mural to be saved before giving the project its final approval. But they said the issue was a serious one.

“A discussion about the mural can’t be put off,” Mayor Mike Dever said. “I want to see what it would take to move the wall or reproduce it, as a worst-case scenario.”

Several mural supporters said they wanted to see if the wall could be left in its current location and incorporated into the design of the building.

The mural currently is adjacent to the site of the Lawrence Farmers Market. Loewenstein said the work was designed to be near the activity of the farmer’s market. The mural uses a theme of pollination to show how painter Aaron Douglas, photographer Gordon Parks, poet Langston Hughes and other black artists had their roots in Kansas but spread to other parts of the globe.

Bill Fleming, an attorney for the development group, said the new building is being designed to include space for a mural and public art, but he said he did not know all of the options available for saving the existing mural.

Commissioners asked for an update on the issue at their April 8 meeting, when they will have a public hearing about an incentive request for the apartment project.