Alan Mulally grew up in Lawrence, graduated from Lawrence High School and Kansas University and went on to run the world’s busiest commercial airplane business.

Now he’s been handed the keys to one of the world’s oldest car companies.

Mulally is the new president and chief executive officer at Ford Motor Co., taking over for Bill Ford Jr., who remains executive chairman and great-grandson of company founder Henry Ford.

“My husband and I just bought a Ford truck last week,” said Alan’s sister Maureen Mulally, who lives in Lawrence and works at KU. “I should have waited a week. I could have gotten a better deal.”

Leading up to his introduction Tuesday at Ford in Dearborn, Mich., Alan Mulally had spent the past 37 years at Boeing Co. – the company he joined as an engineer straight out of college at KU, after loading all his “worldly belongings” into his blue Volkswagen Beetle and hitting the road for Seattle. 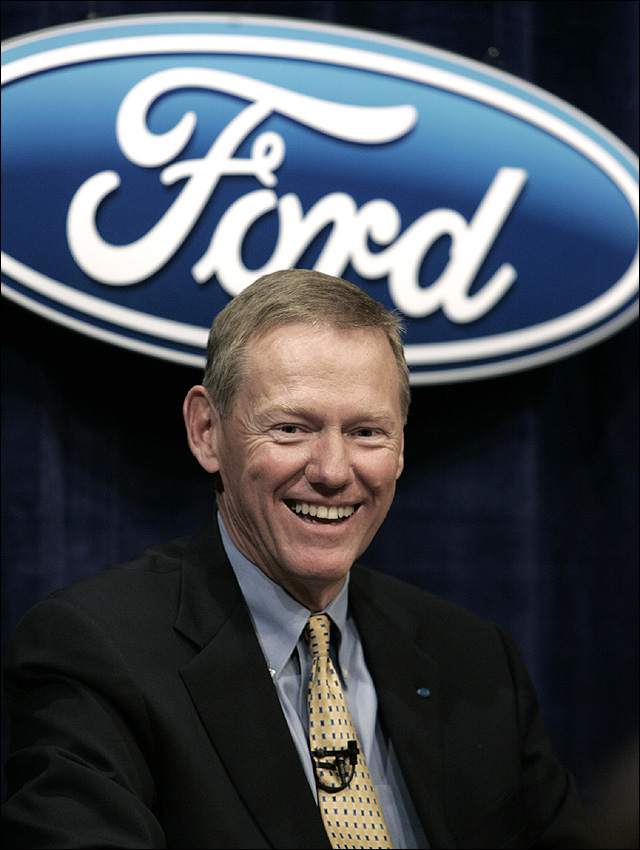 Alan Mulally is all smiles after being announced Tuesday as Ford Motor Co.'s new CEO during a news conference in Dearborn, Mich. Mulally replaces Bill Ford, who will remain chairman of the company founded by his great-grandfather. The change comes more than seven months into a restructuring, which is the second under Ford's watch and has so far failed to revive the nation's No. 2 automaker.

Tuesday’s abrupt shift in career flight plans surprised faculty in the Engineering School at KU, where Mulally had earned his bachelor’s and master’s degrees in aeronautical and astronautical engineering and continues to serve on the school’s advisory board.

But with the nation’s No. 2 automaker struggling – in January it announced plans to close plants and cut up to 30,000 jobs, and through June had posted losses of $1.4 billion – one of Mulally’s former professors is certain the company got the right man.

“He’s pretty talented,” said Chuan-Tau “Eddie” Lan, now a distinguished professor of aerospace engineering. “That’s why he turned around Boeing Commercial Airplanes in the last few years. Remember when everybody was saying that Airbus is going to take over? Well, now Boeing is booming, in terms of commercial aircraft.

“I know nothing about Ford Motor Company’s financial situation, but if it can be turned around, he’s the one to do it.”

Lan also knows this: While Mulally is an exceptional engineer – Lan recalls Mulally as being smart, hard-working and “very focused” in his wind theory class in the late 1960s – there are plenty of other things that go into making a quality chief executive.

“You can’t save a company through the technical stuff,” Lan said. “You need the leadership, and he has that.”

Mulally also knows how to treat his mother.

Lauraine Mulally said her son called her Monday to report the news – “I wanted you to be the first one to know,” he told her – and excitedly explained how the difference between airplanes and automobiles really wasn’t that large.

“He said, ‘They have the same technology. I know all about it,'” she said Tuesday.

Now, after years of proudly wearing a “777” brooch and relating tales of her son’s aviation dreams, Lauraine Mulally said she was excited about her son running a car company.

¢ Alan Mulally graduated from Lawrence High School in 1963. He received a bachelor’s degree in 1968 from Kansas University and a master’s from KU 1969.

¢ Mulally, 61, has spent 37 years at Boeing Co., most recently as executive vice president. He also has been president and chief executive officer of Boeing Commercial Airplanes since 2001.

Maureen Mulally still can’t believe it. She was so excited at work Tuesday that she had to take the afternoon off, giving her time to go home and watch the news coverage on TV.

She was 4 when her older brother graduated from Lawrence High in 1963, then went on to earn degrees at KU in 1968 and 1969 before loading up that Beetle for the trip to Seattle – where he’d go on to pick up a series of foreign cars through the years.

Now, she suspects he’ll happily be driving a Ford.

“It’s pretty awesome, and I don’t use that word very often,” she said. “It’s just awesome.”

Alan Mulally is the second Kansas University graduate to ascend to a top job at one of America’s Big Three automakers.

Chrysler Corp. Chairman Emeritus and retired DaimlerChrysler AG Chairman Robert Eaton is a 1963 KU engineering graduate and is the namesake for the Engineering School’s Eaton Hall.

“Alan Mulally has soared to the top of both the aviation and now automotive industries,” Hemenway said. “Some may see Kansas roots and a KU degree as humble beginnings, but actually they are just the solid foundation needed for a remarkably successful career in two of the most innovative and competitive industries in the world. We are proud Alan Mulally is a Jayhawk.”