When Nils Gore heard about skyrocketing heating prices forecast for this winter, it didn’t give him a warm, fuzzy feeling.

He decided to go on the offensive, adding insulation to his large, older home at 937 Maine. He hopes it won’t take long for lower bills to help him recoup the $150 he paid for the insulation.

“It was a mess, and it wasn’t a pleasant job,” Gore said. “But that was something I could do myself, it took a short period of time and took a fairly reasonable amount of money. I’d like to replace my windows, but that would take several thousand dollars.”

Rising costs have many homeowners and renters looking for ways to trim their energy bills this winter.

Kansans will likely see a double-whammy on their energy bills in the coming months. Natural gas prices are expected to increase 50 percent to 70 percent this winter, compared to a year ago. And Westar Energy, the state’s largest electric utility, is requesting a rate increase that would increase bills around 9 percent for those in its northern region, which includes Lawrence. 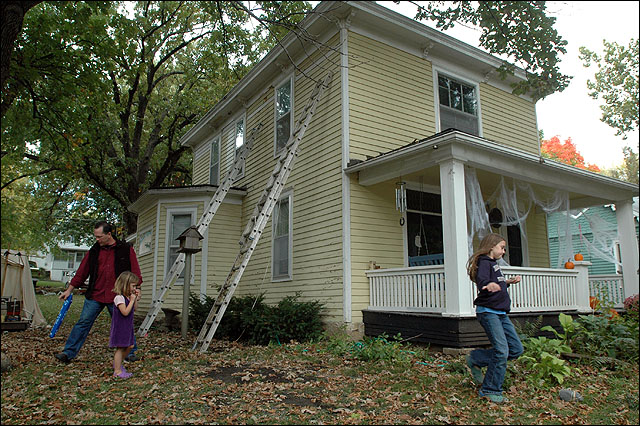 Nils Gore added insulation to his large, older home at 937 Maine hoping that it won't take long for lower heating bills to help him recoup his 50 investment. On Saturday, Gore and his daughters Jodi, 4, left, and Ella, 10, were outside their home, which Gore is now painting.

While that may not bode well for consumers’ bottom lines, there are plenty of things they can do to reduce costs.

“All of them sound like pretty straightforward, common-sense things,” said Al Butkus, vice president for corporate communications with Aquila, which provides natural gas service to Lawrence. “But they do add up.”

Those are things like changing the furnace filter, turning back the thermostat, wearing a sweater, lowering the temperature on your hot-water heater and turning off appliances and electronics when they’re not in use.

For the more ambitious, there’s replacing older windows with newer windows that promote energy conservation, adding insulation – particularly in the attic and crawl space – and weather-stripping around windows and other areas where cold air might sneak in.

John Craft, owner of Kaw Valley Home Care in Lawrence, said there are often surprise areas that leak in the houses – around light fixtures or electrical outlets, for example.

For those who are serious about energy conservation, he recommends undergoing an energy evaluation that shows leaky spots and other areas of energy loss. A typical evaluation costs $200 to $300, he said.

“A number of houses have zero insulation – especially older homes may not have any insulation at all,” Craft said. “I can’t imagine what those homeowners are going to think this year with gas prices going up.”

With 54 percent of the dwelling units in Lawrence occupied by renters, he realizes not everyone can do much about their energy costs.

“That’s a real tough situation,” Craft said. “No one has any incentive to make improvements on a unit.”

Craft said new homes being constructed today are more energy efficient than they were a generation ago. But until consumers demand things that make houses more efficient – such as smaller floor plans and windows on the south to maximize sunlight – those features won’t be standard. 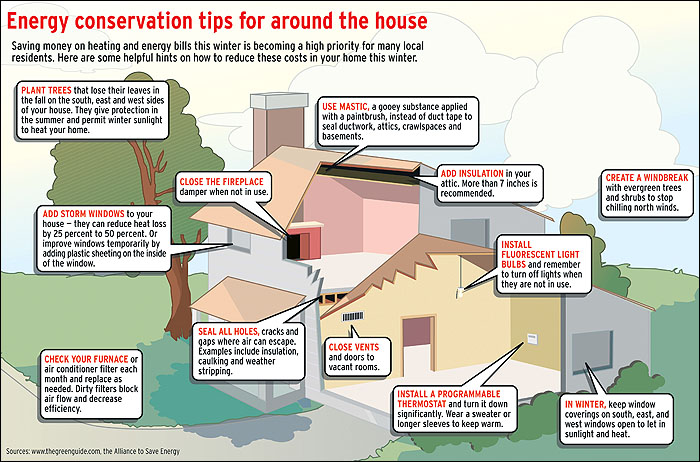 “Part of the reason we haven’t seen efficiency of houses go up more over the years is it’s not very sexy,” he said. “It’s more fun to buy a gadget or spend that money somewhere else. There’s not an easy quick fix usually for this stuff. We’ve been lulled to think that energy is cheap or, at worst, affordable.”

Gore, an architecture faculty member at Kansas University, is among those who have decided energy isn’t cheap – and he’s glad he took a first step to do something about it.

He’s looking forward to comparing his heating costs this winter – with the added insulation – to last year’s bills.

“We’ll see,” he said. “I’ll check my gas bills and see the volume of gas this winter vs. last winter. I figure it’ll make some difference. Hopefully the $150 is a good investment.”

Additional tips for conserving energy in your home:

¢ Wash clothes in warm or cold water, and always use cold water to rinse clothes. Hang clothes to dry whenever possible.

¢ Turn off appliances, lights, electronics, etc., when not in use.

¢ Take a five-minute shower instead of a bath to reduce hot water use.

¢ Do only full loads when using the washing machine or dishwasher.

¢ Set the temperature on your hot water heater on warm. A thermometer held under running hot water should read no more than 120 degrees.

¢ When cooking, keep lids on pots to improve efficiency.

¢ Put an extra blanket on your bed.