Martin K. Miller thought he was just letting off steam in 2002 when he typed his frustrations about his wife into a journal on his home computer.

“I got it out of my system and forgot about it,” Miller said in court last week.

Little did he know that the journal – which listed the ways his wife wasn’t meeting his needs and described his aversion to divorce – would eventually be found by detectives, shown to jurors and used to help convict him of first-degree murder in his wife’s strangulation death.

Miller’s conviction last week served as a reminder of the growing importance of computerized evidence in criminal cases. Internet searches and e-mails have played a key role in each of the past two first-degree murder trials in Douglas County: Miller’s and the trial earlier this year of Kansas State University professor Thomas E. Murray.

“It’s becoming increasingly common that any time you have a serious criminal investigation, that law enforcement is seeking the seizure of computers as a source of evidence that’s going to contain information,” Dist. Atty. Charles Branson said. “It’s the modern digital paper trail.”

The Lawrence Police Department has two detectives, Scott Slifer and Mike Schneider, assigned to computer forensics, the practice of retrieving information from computers for use in criminal investigations. Slifer and Schneider examined Miller’s computers.

Also, Lawrence Police Det. Dean Brown, who analyzed the computers in the Murray trial, is on loan to a regional FBI lab in Kansas City, Mo., dedicated to examining computers. 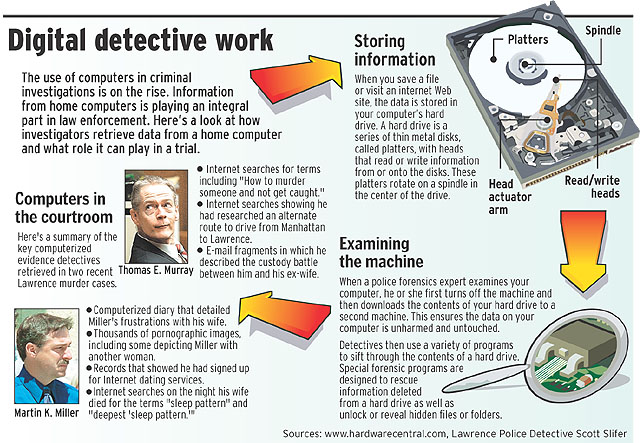 “I think we’re becoming better and better equipped,” Branson said. “I know Lawrence PD has spent a lot of time training in that area.”

Typically, when police seize a computer they make an exact copy of the hard drive, then examine the copy with software that allows them to view an exhaustive list of files and file activity.

In an interview in late 2004, Brown described himself and his colleagues as “digital crime-scene investigators.”

Computer evidence, just like a blood stain or a footprint, tells a story that’s hard to dismiss.

For example, in the Miller case, he initially told detectives he’d been asleep between 11 p.m. and 2 a.m. the night of his wife’s death. His daughter, however, told detectives she’d heard her dad walking around the house and booting up a computer shortly after midnight.

It would have been one person’s word against another had detectives not found that in the same time frame, someone used the computer to search the Internet for terms including “deepest ‘sleep pattern.'”

Miller later changed his story and admitted being awake around midnight and doing the searches.

Vernon Geberth, a New York City police veteran and homicide consultant, said the emphasis on computer training for police was partly a response to a growing number of Internet-savvy sexual predators.

“The bottom line is law enforcement was caught kind of with their pants down with the advent of all the Internet crime,” he said. “In the future, all investigative units are going to have to have people who are technically astute and know how to go into the computers.”

But as the two recent murder cases show, convictions for low-tech crimes such as strangulation and stabbing can now hinge on high-tech evidence.

“It’s like the old junior high adage: if you don’t want someone to know about it, don’t write it down,'” Branson said.