Many people will pay the fine and not even make a courtroom appearance. And most don’t appeal municipal court rulings on speeding tickets to the district court.

“It maybe happens once every two years,” said Jerry Little, assistant prosecutor for the city of Lawrence.

But Lawrence resident Zamir Bavel has turned a $45 speeding ticket issued to him in March 2004 into an all-out battle.

After a Lawrence Municipal Court judge ruled against him in the fall, Bavel, a computer science professor at Kansas University, appealed to the Douglas County District Court. His trial, which began in April, will continue at 10 a.m. Monday before District Judge Robert Fairchild.

“This is not about money,” said Bavel, who has spent about $1,000 on his court case. “I want the police department to reform. They claim there is no mandatory training standard for radar operators and as a result they let officers go and issue citations. I don’t agree with this.” 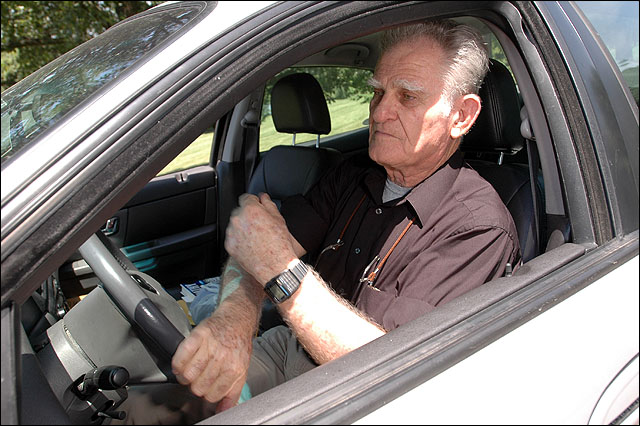 Zamir Bavel is fighting a speeding ticket he received in March 2004. He has spent about ,000 on fighting the 5 ticket. Bavel wants the police department to have mandatory training on radar guns for officers before they are allowed to issue citations. He also claims that there could have been interference with a radar gun resulting in an incorrect reading.

According to a partial transcript from an April 18 hearing, the police officer who pulled over Bavel has been with the Lawrence Police Department since 2001 and previously served as an officer for the Larned Police Department for five years. The officer received on-the-job training to use radar guns at both departments. He took no classes and had no special coursework.

“It was said in court that there was no real training,” Bavel said. “I find it unimaginable that this can happen.”

The Topeka Police Department requires 16 hours of training in the classroom, eight hours of field training and written tests to be certified to use a radar gun. Wichita and Kansas City, Kan., police departments have similar standards.

The National Highway Traffic Safety Administration has standards for training officers to use radar guns, Bavel said. The agency, which is responsible for setting safety standards and verifying compliance by automobile manufacturers, requires that officers have 24 hours of training in the classroom, 16 hours of field training and take a written test to become certified to handle a radar gun, he said.

That may be true, Little said. But there’s no requirement in the law that states the police department has to follow the NHTSA’s program, he said.

Lawrence Police Sgt. Dan Ward said he and other officials with the department couldn’t comment on training practices because of the litigation.

Bavel said that through his research he found that overhead power lines, power generating stations and substations can interfere with radar gun readings.

“There’s a substation near where I was pulled over,” he said.

In a radar information manual issued by the National Motorists Association Foundation, it states that interference from power-generating stations may cause false readings, but usually only decreases radar range.

Little said most of the time the city tries to work out a deal in these situations. But Bavel wasn’t interested.

“He wanted his day in court,” Little said. “So, we’re accommodating him.”

Bavel insists he wasn’t speeding when he was pulled over near Ousdahl and 19th streets.

“I know I was not speeding,” he said. “I am the odd, rare bird who regards the law as, not quite but pretty close to, sacred. I don’t break the law because I am afraid of getting caught but because I believe it’s wrong to break the law.”

If Bavel isn’t successful, he has the opportunity again to appeal the judge’s decision. He said he would take this matter to the Kansas Supreme Court if need be.

But if he is successful, Bavel will be found innocent of speeding and won’t have to pay his fine. But that wouldn’t leave him feeling vindicated, he said.

“This is a matter of principle,” Bavel said. “I am more interested in reforming the police department than being found not guilty. I am dead-set on making this matter known to people.”

The city also could appeal the decision if Bavel is found innocent, Little said.