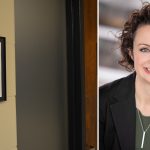 Pictured at left in a Journal-World file photo from Jan. 26, 2018 is an entrance to Heartland Community Health Center. At right is Robyn Coventon.

Heartland Community Health Center has named a new CEO, roughly 11 months after its board of directors placed the organization’s previous leader on unpaid leave.

Robyn Coventon comes to the center from another federally qualified health center in Oklahoma, according to a news release from the organization. She will join the clinic on March 4.

“I am confident that we have found a leader of high integrity who can responsibly engage the talented staff of Heartland Community Health Center in fulfilling our mission,” Devon Kim, chair of Heartland’s board, said in the release.

According to Coventon’s LinkedIn page, she worked for about five and a half years as chief administrative officer at Variety Care in Oklahoma City.

“I look forward to working with the entire staff to deliver high-quality health care and an excellent patient experience to improve the health of our patients – they deserve nothing less,” Coventon said in the release.

A spokeswoman with Heartland said Coventon’s salary was confidential information. However, the 990 tax form that Heartland filed with the IRS in March 2018, published on ProPublica, listed her predecessor’s 2016 salary as $121,784. Those records are open to public inspection.

This leadership change — which is permanent, according to the news release — marks the fourth at the local safety net clinic within the past year.

Heartland’s board announced on March 14, 2018, that it had suspended then-CEO Jon Stewart while accounting firm BKD conducted an audit of the organization’s finances.

At the time of Stewart’s suspension, the board said in a news release that additional information would be shared when the BKD audit was complete. That has not happened, and the specific reason for and exact timing of Stewart’s employment with Heartland coming to an end were still unclear Wednesday.

Since March, the organization has named two interim CEOs. Allie Nicholson, who was serving as chief operating officer upon Stewart’s suspension, took over as interim CEO. In November, the center announced a second interim CEO, Julie Boden Schmidt. Nicholson returned to the COO position when Boden Schmidt took the helm.

Reached by phone Wednesday morning, Kim said she could not comment about when and why Stewart’s employment ended, whether the BKD audit had concluded and what its findings were, whether there are any legal matters pending or whether the board would ever be able to publicly comment on the matter.

Kim did say, however, that she is excited to bring Coventon on board.

• June 19, 2018 — Here’s what we know about Heartland Community Health Center and its CEO situation; leadership is mum