Sales tax collections continue to fall in Lawrence, but online shoppers are picking up some of the slack 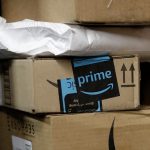 In this May 9, 2017, file photo, a package from Amazon Prime is loaded for delivery in New York. (AP Photo/Mark Lennihan, File)

Here is a sentence I never thought I would say: Maybe online shopping will save the day. Before my banker keels over, let me quickly add that I still don’t believe that, but it may temporarily save the city’s budget.

The latest sales tax numbers for the city of Lawrence are out, and an interesting trend is developing. Sales tax collections in the city are falling in 2019. The May sales tax check the city received was smaller than the May check it received in 2018 by 3.4%. That marked the third consecutive month that Lawrence has seen year-over-year declines in sales tax collections.

For the entire year, Lawrence has seen its sales tax collections decline by 1.5%. City budget-makers had expected sales tax revenues to grow by 2%. Normally, that would create a fairly immediate problem for the city’s budget.

But this year, something else is happening. A different type of tax — called a use tax — is soaring. Use tax collections for the city are up nearly 20% from a year ago. What is a use tax? It can be many things, but the most common example is the sales tax you pay on a purchase from Amazon or other online retailers. The online screen may label it a sales tax, but since the sale didn’t actually occur at a physical location in Lawrence, it actually is labeled by the state as a use tax.

Use taxes have always been a fairly small part of the city’s tax collections, and they still are. But they’re worth taking note of now because of how much they are growing. Through the first five months of the year, the city has collected an extra $300,000 in use taxes compared with the same period a year ago.

That $300,000 in new revenue is helping offset declining sales tax revenues. While city leaders have begun to talk about the need to cut some spending or add some fees (remember the recreation center proposal) due to falling sales taxes, it isn’t at all a sure thing that the city is going to see a revenue shortfall in 2019.

I talked briefly with city finance director Jeremy Willmoth, and he said it was still too early to say that 2019 revenues were going to come in less than budgeted. He said much of the talk about the need to reduce some expenditures — especially in the capital improvement plan — was driven more by a concern that sales tax growth would remain stagnant for the next two to three years.

The city’s financial documents also show that a budget shortfall isn’t yet assured. The city hasn’t produced its report for May, but its April report showed that when you add use tax revenue into the mix, the city’s total sales and use tax revenues actually are on pace to come in slightly above last year’s totals. Through April, the city had collected about $13,438,000 in sales and use taxes compared with a budget that called for about $13,405,000 to be collected thus far.

While the decline in sales tax collections may not create an immediate problem, the sales tax numbers are still concerning. One, don’t fool yourself into thinking that sales taxes and use taxes are truly equal. Yes, a dollar in sales tax will buy you as much as a dollar in use tax. But the big difference is that there is a local job behind that dollar in sales tax. After all, someone locally sold you the product that you paid a sales tax on. That is often not the case when you are paying a use tax. While online shopping might be good for delivery driver jobs, it puts pressure on bricks-and-mortar retailers in the community. Those bricks-and-mortar businesses, in addition to collecting sales taxes, also pay property taxes in the community. So, long term, the city should hope that sales tax growth outpaces use tax growth.

Currently, though, sales tax collections are declining, and not just in Lawrence. A majority of the major retail centers in Kansas have seen a decline in collections thus far in 2019. Here’s a look:

• There is some good news for retailers thus far in 2019. Traditional retailers may not be taking the brunt of the slowdown in sales tax collections. The city puts out a separate report each month that shows what sectors of the economy are collecting sales taxes. The latest report is for April, and it shows traditional retailers actually have seen a 6% increase in sales tax collections from the same period a year ago.

The sector that has seen the biggest decline in collections is utilities. You pay a sales tax as part of your monthly utility bills. Thus far, utility bill charges have been less this year than last year, and, as a result, sales tax collections are down 14% in the sector.

The other big decliner reflects a slowdown in Lawrence’s hot building market. Sales taxes charged on building supplies are down 11%.

The car dealers also have seen a bit of a decline. Sales tax collections are down 2% compared with a year ago. Grocery stores have seen virtually no increase during the time period, while bars and restaurants have seen a 2% increase.

One other decline to keep an eye on is the hotel sector. A lot more hotel rooms have been added to the city, but, as a result, it appears hotels have had to discount some room prices. As is often the case, hotels build for the demand they think is coming rather than the demand that is here right now. The city hasn’t yet added a ton of new events to fill those hotels. Thus far in 2019, hotel sales tax collections are down 6% from a year ago.