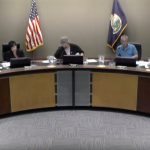 The Lawrence City Commission meets Tuesday, May 14, 2019, at City Hall.

The City of Lawrence is collecting less in sales taxes than anticipated, and city officials are now projecting that the city will not have money for some of the projects it previously planned to complete in the next five years.

At its work session Tuesday, the Lawrence City Commission reviewed the city’s draft 2020-2024 Capital Improvement Plan. The plan includes about $62 million in projects and purchases for next year. The draft plan is balanced in line with current five-year revenue projections and includes a number of unfunded requests, according to a city staff memo to the commission.

Finance Director Jeremy Willmoth told the commission Tuesday that based on where 2018 ended and the first four months of 2019, sales tax growth has been revised from last year’s projections, down from about 2% to about 1%. He said the new projection equates to about $5 million less for the city’s five-year CIP, meaning there are several projects that moved from funded to unfunded.

“There is a great saying that hope springs eternal, but budgets need to be realistic,” Willmoth said. “And so we really wanted to bring the 2019 projection back down to what we felt was a realistic projection for this year and then extrapolate into the future years based on where we’re seeing the sales tax trend today.”

City operations and maintenance are funded through property taxes, sales taxes and fees. Willmoth noted the projections for 2019 were made about a year ago with only a few months of data for the year, and were not far-fetched considering the growth rates of the past. He said that sales tax was growing about 4.5% per year from 2010 to 2016; however, the year-over-year growth was only .74% for 2017 and 1.68% for 2018.

The Journal-World recently reported that Lawrence sales tax collections for the first part of the year are down 1% compared with the same time period a year ago. The city has budgeted for about a 2% increase in sales taxes in 2019. The city relies on sales taxes to generate about $40 million a year in revenue that funds everything from basic services to public transportation, affordable housing programs and road repair.

Willmoth said that while funding was added for some deferred maintenance projects in 2020, and the overall amount budgeted specifically for the 2020 CIP has increased, there are still several new projects and maintenance projects currently unfunded. The current draft of the five-year CIP includes about $97 million of unfunded projects.

Willmoth later told the Journal-World that some of the unfunded projects include additional money needed for street maintenance and funding previously planned for the Lawrence Loop, parkland acquisition, park maintenance and a water splash park. He said one of the bigger additions to next year’s CIP is the operations center for the public works, utilities and parks and recreation departments. The center calls for about $4 million in 2020, with a total project cost of about $29 million.

The CIP does include $350,000 toward completing a downtown segment of the Lawrence Loop, but hundreds of thousands of dollars previously planned for the loop over the next five years have since been moved to unfunded. Several members of the public spoke to the commission Tuesday about the change, saying that finishing the trail system was an important asset for the city and should be a priority. The loop is about 78% complete and once done will provide a continuous 22-mile concrete path around Lawrence.

Tuesday was the first public presentation of the 2020-2024 CIP and commissioners will see an updated version of the document as part of the city manager’s recommended budget on June 18. The full draft of the plan and all project descriptions are available on the city’s website, Lawrenceks.org.