Another restaurant closes; how the misadventure of self-service dry cleaning is sparking a Ninth Street project

The laundromat building at 900 Mississippi St. is pictured. Plans have been filed to convert the building into a restaurant.

One of Lawrence’s more unique restaurants has closed its doors. Sully & Hank’s, which opened in the former Presto gas station location at Ninth and Louisiana streets, shut down earlier this week.

The closing marks the end of what had seemed to be an experiment in slightly funky fare that began with the restaurant’s opening in mid-2017. If you remember, Brad Walters, the former owner and chef at The Basil Leaf Cafe, opened the restaurant with a menu that he billed as being full of Kansas comfort food with a few twists. Those included dishes like the Home Wrecker — a foot-long chicken-fried hot dog covered in sausage gravy, bacon and other fixings — or things like a peanut butter and jelly sandwich made with French toast.

Walters announced the restaurant’s closing in a Facebook post. He didn’t provide any specifics on why he decided to close the business.

“There is a multitude of reasons we are saying farewell,” Walters said in the post. “It is what it is, and the good feels, amazing moments and endless memories will carry us through these days of sadness.”

The restaurant recently had changed its menu, offering a broader selection of hamburgers while also maintaining a few off-the-beaten path dishes like stuffed tater tots and a pork and waffle dish.

The venture did succeed in remaking the old gas station location. The convenience store portion of the building was converted into a dining room, and the old gas pump canopy remained and was used as a roof for a large outdoor seating area.

The building is owned by longtime Lawrence business owner Brad Ziegler. He said he expects to get another restaurant in the spot relatively soon, as he’s already had several restaurant folks express interest.

In case you are wondering, the closing of Sully & Hank’s doesn’t impact the Basil Leaf Cafe next door. In case you had forgotten, Walters sold that business to another operator last fall. 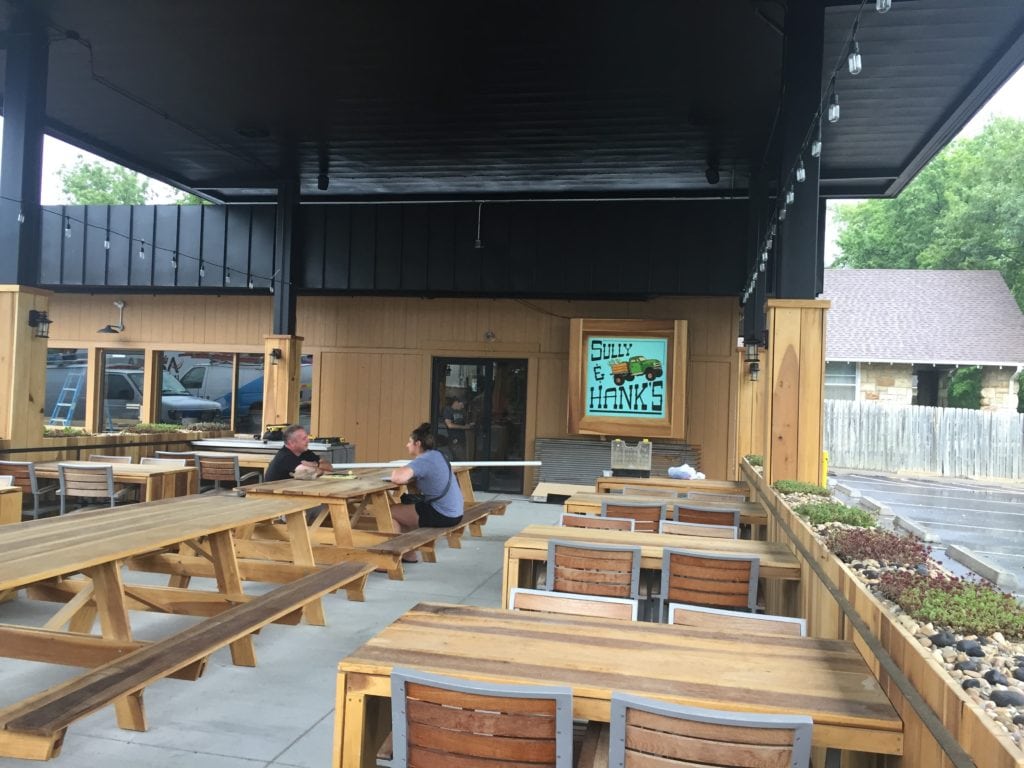 If you want to talk about unique, though, look to the building basically across the street from Sully & Hank’s. It is the old laundromat building at Ninth and Mississippi streets. As we reported several months ago, plans have been filed to convert the building into a restaurant location.

Work on that project has been slow to get going, but a major renovation is now underway. Brad Ziegler also is the owner of that building, and he now tells me the project has turned into a complete historic renovation project. He’s working to get the building included on the National Register of Historic Places.

Why? Well, in part, because his team discovered that the 1920s building likely was the location of the nation’s first “self-service, coin operated dry cleaning business.” Not to be confused with a laundromat; we are talking about machines that actually were used to dry clean your suit or other clothes.

Lawrence architect Stan Hernly, who is preparing the historic application, found that the business in 1961 installed 20 “automatic dry-cleaning machines” manufactured by RCA Whirlpool. Press accounts from the day reported that it was the nation’s first completely automatic, coin-operated dry cleaning center.

Perhaps, though, KU students in the university-oriented neighborhood were more interested in feeding their loose change to a fully automatic bartender rather than making sure their suits looked crisp for algebra class. Other nonstudents must have had an excuse as well.

“It must not have taken off because you don’t see one on every corner, these days,” Ziegler said.

Hernly said it is unclear when the self-serve dry cleaning idea folded. The installation of the machines received a lot of fanfare, but their demise did not seem to generate an article. The business was used as a laundromat, though, until last summer.

In addition to the self-service dry cleaning idea, the historic register nomination also highlights the building’s past use as a grocery store and meat market, which were run by a pair of German families. Klock’s Grocery and Beal Bros. Meat Market operated there until the mid 1940s, and then a Reeves Grocery was there until 1959, when the building became a laundromat.

The idea of small neighborhood grocery stores is an important part of Lawrence’s business history. But it is easy to forget how prominent those businesses once were in Lawrence. One interesting fact to pass along from Hernly’s report: In 1920, Lawrence had 37 grocery stores and 12 meat markets.

As we reported, Ziegler bought the property with the idea of converting it into a restaurant. He said that is still a possibility, although he also has shown the space to a nonrestaurant user. Currently, he is focusing on completing the renovation. The project hopes to use historic tax credits, which means the exterior of the property will maintain much of the original look from when it was built in the 1920s.

Now, just like then, the property is situated right near a major entrance to the KU campus. Ziegler said he thinks the building can turn into a nice addition for the campus community and surrounding neighborhood.

“The location is really attractive,” Ziegler said. “I love the neighborhood, and obviously like that part of Ninth Street because I’ve purchased several buildings there.”

Hernly said state historic preservation officials are expected to make a recommendation on the national register designation in May. Construction work is already underway on the project, which will include a new roof, new window, new mechanical systems and more, Ziegler said.