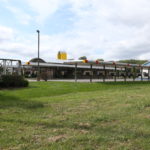 Plans have been filed for the former Sonic restaurant in North Lawrence to serve as a car lot and tow service business. The restaurant has been closed since September 2018.

Maybe you have driven by a Sonic restaurant and seen the same car there all day, every day. (Apologies, but it is hard to drive with an extra-large limeade, given that the cup takes up most of the front seat.) Regardless, expect to see some long-term car parking at a former Lawrence Sonic location. Plans have been filed to convert the former Sonic in North Lawrence into a used car lot and tow truck headquarters.

The drive-in restaurant closed its location at 1003 N. Third St. in September, and it has been vacant ever since. But local businessman Michael Eravi has filed plans at City Hall to locate his Sixth Street Towing business in a portion of the space. Eravi, who owns Sixth Street Towing with business partner K.C. Horres, is bringing on another partner to open a used car business that will occupy the rest of the space.

The car lot will occupy the spaces underneath the canopy that served the drive-in restaurant. Eravi said he had seen a former Sonic in Martin City, Mo., used that way and thought it was a good idea. The covering helps protect the cars from hail and other weather, while the kitchen area can be used as an office for the car lot. (Sounds good to me. I’ve always wanted an office with a deep fat fryer.)

Eravi said the used car lot will operate in an old-style way. While many used car lots are now geared around the “buy here, pay here” concept, Eravi said that won’t be how this lot works. He said that system seems to be more about financing than selling cars.

“We are not interested in what interest rate we can charge you,” Eravi said. “We just want to sell you a decent car. We want to focus on affordable cars that are well maintained and won’t leave you stuck.”

He said he’s excited about putting the business in North Lawrence.

“We view being in North Lawrence as a real positive and having a lot of potential for us,” Eravi said. “It is a great blue collar neighborhood.”

Eravi said he expects the car lot to have an inventory of about 20 vehicles. He said he might use the site to host some car shows and other drive-in type of events, since it has that type of history and has good visibility and is easy to get to off the nearby Kansas Turnpike. But, even though Eravi once was a manager of a Sonic, don’t expect him to use the site to get back into the food business, he said.

The site also is expected to provide a boost to the Sixth Street Towing company, which has been in operation since early 2016. The tow company will operate in an existing automotive shop building that is on the back portion of the Sonic lot. It also has been long vacant. That will provide a place for the tow company to store vehicles inside. It currently is lacking that type of space.

• Feb. 10 — That will be $421, cash: Man’s roadside towing experience left him reeling, but it’s allowed under Douglas County policy

The new space will allow Sixth Street Towing to become a vendor for the city of Lawrence, which uses various tow companies when the police department needs to have a vehicle removed from an accident scene or otherwise. There have been concerns about how much some tow companies charge for that kind of service, and Eravi said he’s eager to get into that market and predicted more competition will help drive down prices.

Eravi said he hopes to begin work on the site in September and be open for business before the end of the year.

• Nothing ruins a good breakfast like the thought of bankruptcy. (When you order as much bacon as I do, the thought crosses your mind.) Perhaps some of you saw the national news on Tuesday that the Perkins restaurant chain had filed for bankruptcy and was closing some restaurants.

But don’t worry, Lawrence’s restaurant won’t be impacted, local owner Dan Esmond told me. The Lawrence Perkins, located at 23rd Street and Ousdahl Road, is not owned by the company but rather is a franchise.

“I own the real estate too,” Esmond said. “We are really solid. It is not going to affect us at all.”

Esmond, though, is on the board of directors for Perkins nationally. He said he think Perkins overall will come out of the bankruptcy fine. He said the Perkins brand has remained pretty strong. The company ran into problems when it purchased the smaller Marie Callender’s chain.

“I think what they really are trying to do is separate the two businesses,” Esmond said.

Esmond said his understanding is that Perkins already has four other restaurant or investment companies that have expressed interest in taking over the Perkins brand. He said he’s optimistic that the Perkins brand, menu and other offerings will continue on, even if another company buys it.

“Guys like us won’t even feel the bump,” Esmond said of potential ownership changes. “The thing I do hate is it puts a little bit of tarnish on your brand as people read about it across the country.”

But the news in Lawrence has generally been positive, he said. The Lawrence restaurant reopened a little more than a year ago following a fire. He said the crowds have returned to the restaurant that is known for its breakfast offerings and classic American fare.

“It has been fantastic,” he said.