That will be $421, cash: Man’s roadside towing experience left him reeling, but it’s allowed under Douglas County policy

Tip: Pick preferred towing company in advance in case you end up needing one 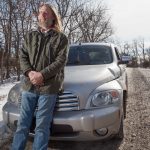 Douglas County resident Ryan Eddinger is pictured with his car in January 2019. Eddinger's car recently slid off a steep portion of Queens Road into a ditch during icy conditions, and he was surprised when a towing service was allowed to require only cash for payment.

On an icy morning a few weeks ago, Ryan Eddinger was nearing the top of a slick hill when it hit him: “I’m in trouble.”

“It’s just a sheet of ice,” he said, recalling when he realized he wasn’t going to make it up the steep stretch of Queens Road just north of Lawrence. “I started to slide backward.”

Eddinger’s car ended up off the road in the snow, undamaged but stuck. A tow truck pulled him out and he was ready to be on his way as soon as they squared up.

Shocked — and without that kind of cash in his pocket — Eddinger initially protested. But under the county’s policy regulating towing called in by law enforcement, towing companies are allowed to charge such a fee and specify what form of payment they want it in.

The county has a system in place for what it calls nonpreferential tows. It goes into effect when law enforcement calls for a tow truck to deal with an accident, an illegally parked vehicle or, as in Eddinger’s case, a roadside assist or other situation where the driver doesn’t request a specific tow company.

The county keeps a rotating list of pre-authorized tow providers, and emergency dispatchers send out whichever company is next on the list.

“For the privilege of being on that list — it’s guaranteed business for them — we make them comply with what’s in the contract,” said Jill deVries Jolicoeur, assistant to the county administrator.

Tow providers must meet criteria such as being insured, having a secure tow lot and being on call 24/7, according to the tow service provider agreement they sign. There are currently eight companies on the tow provider rotation list.

Since 2012, the county has had a cap on fees the tow operators can charge for nonpreferential tows.

That was done to prevent towing companies from price-gouging residents, Jolicoeur said. The Douglas County Commission set the caps to help protect consumers following a 2011 Journal-World article on the issue, she said, and the caps are legal under the way the towing system is set up now.

According to the latest fee schedule, approved in 2016, the maximum hookup charge is $175 for a typical passenger vehicle, plus $4 per mile and $35 a day for storage. However, because some tow jobs are more complicated than others, there are also maximum fees set for additional services such as bringing in a second truck, cleaning up debris or tarping a vehicle with broken windows.

Beyond that, towing businesses have leeway to operate how they want. Jolicoeur said that includes demanding whatever form of payment they want.

Many companies on the list require cash payments to retrieve towed vehicles from their storage lots, something they try to notify customers of before they show up, according to calls made to several of the businesses.

For collecting payment by the side of the road, most are equipped to and do take credit cards — but not all.

That’s what Eddinger learned only after he found himself in a sticky situation.

After his slide-off, Eddinger said his first call after getting stuck was to the sheriff’s department. He felt like the road was unsafe and — standing out there next to it in that particular spot — so was he.

Sure enough, he said, not long after a deputy arrived, another vehicle headed up the hill and started to slide backward just like he had.

When the deputy asked him if he had a towing company he preferred, Eddinger told him, “Just call whoever, it’s fine.”

Eddinger waited in the deputy’s car a little farther down the road while first one tow truck, then a second truck came to the scene. Eventually, they pulled his car out and towed it down the hill to where he was waiting.

The driver released it from the truck, and Eddinger was able to confirm it was drivable. He asked what he owed, and got the invoice for $421 in cash. According to the invoice shared by Eddinger, the total came from a $175 hookup fee, $4 a mile for 24 miles, $75 for a winching fee and $75 for the extra truck.

Eddinger said he was shocked by the total and perhaps even more shocked that a business wouldn’t take a credit card for that amount of money.

The driver told Eddinger that if he did not pay, he would hook his car back up and tow it to the lot, where Eddinger could pick it up later, though he’d still have to pay in cash.

That’s also allowed under the county’s towing policy, though in such a situation, the towing company can’t tack on a storage fee or any additional fees as long as the vehicle’s owner retrieves it from the lot within 24 hours.

Eddinger said he argued with the tow truck driver and, admittedly, used some “colorful” language.

Eventually, he said, the driver agreed to follow Eddinger to the bank, where he withdrew cash and paid. A deputy came to the bank, too, telling Eddinger he was there to preserve the peace.

Eddinger wasn’t happy about the situation, though. He said he felt preyed upon.

Most tow truck operators on the county list take credit cards by the side of the road, and some don’t understand why all companies wouldn’t.

“It’s 2019,” said the assistant manager of one longtime area business, Jason Kent of Hillcrest Wrecker. “Cash is not irrelevant yet, but there’s absolutely zero reason that you wouldn’t be able to take a different form of payment on the side of the road.”

But the owner of the company that pulled Eddinger out of the ditch pointed out that his company — a small, two-truck operation — has chosen to be cash-only. That goes for roadside, as well as the tow lot.

Terry Pederson, owner of Midwest Tow, said years ago, he accepted credit cards. But when it came time to get a new machine, he decided not to and also didn’t want to incur the extra fees associated with accepting payments via card.

“I don’t do enough (business) to justify the cost of having a machine in the truck,” he said.

Pederson also defended the charges in Eddinger’s case, saying that, since his first truck wasn’t able to get the car out, he had to send a second. Icy conditions and that particular stretch of Queens Road made for a challenge, he said.

That is not unusual for local tow operators. Though some said they take personal checks with discretion, all reached by the Journal-World said getting burned with bad checks is a risk.

That’s part of the reason most tow operators charge cash for people to retrieve their vehicles from the tow lot.

In addition to receiving bad checks, they said they’ve even had people pay with credit cards, take their cars, then cancel the payment or dispute it, resulting in the tow company not getting any money for its work.

If you find yourself needing a tow, chances are high that you’re in a bind.

Jolicoeur and the tow operators all suggested doing a little homework and picking a preferred tow company in advance.

“It’s simpler to have a plan and call a tow company of your choice versus having the police pick one,” Pederson, of Midwest Tow, said. “Most people don’t know in a time of panic.”

Mindy Cassin-Schaal, owner of Quality Tow, said she tells people this: “Put my number in your phone. You get in an accident, I need to be the second phone call you make. The first is to your spouse or your mother.”

Cassin-Schaal said she charges reasonable fees but, realizing even a simple tow can be a daunting cost, tries to “work” with people who are struggling to pull together cash to get their car back.

She and other tow operators realize they’re often dealing with people who are having a bad day and aren’t happy when their car ends up in a tow lot.

The operators reached by the Journal-World said they support the county’s towing fee caps.

It makes things fair and simple, they said.

However, within those limits, each company can tailor its rates to how it wants to run the business.

Lighthouse Tow and Recovery owner Bryan Sorenson said even good tow companies can end up with bad reviews, sometimes just because people are angry about the situation altogether.

Sorenson said he tries to focus on customer service and part of that isn’t necessarily charging the max fees allowed. For example, he said, in the most recent ice storm, his company pulled out seven cars that slid off Kansas Highway 10, charging most of them around $75 or $100 for the service.

“We want return customers,” he said. “We’re here to provide a service so people will continue to use us.”