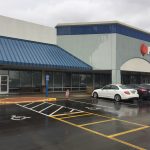 The Journal-World will be moving to new offices in North Lawrence. The Journal-World will occupy about 7,500 square feet of space next to Protection One in the I-70 Business Center. In the photo above, the newspaper's offices will be behind the double doors on the left edge of the picture. The move will take place by May 1.

The Journal-World’s offices will be moving to North Lawrence later this spring.

As we have been reporting for the last couple of months, the Journal-World’s current office building — the historic post office building at Seventh and New Hampshire streets — has become a hot commodity. As we reported last month, Blue Cross Blue Shield of Kansas has purchased the approximately 30,000-square foot building.

That’s left the Journal-World seeking new office space, and we’ve found it in the I-70 Business Center, which is next to the Kansas Turnpike exit that brings you into North Lawrence. For those of you in town long enough, you may know the center as the former Tanger Factory Outlet Mall.

No, before you ask, we won’t be offering any closeouts on fashionable clothing. As my wife will tell you, I don’t own any fashionable clothing. Besides, the days of the North Lawrence center serving as a mall are long gone. It has converted to a business center that houses offices, a couple of call centers, the driver’s license office and a few other users.

We will be right next to the anchor tenant in the center, Protection One, the national home security company that uses Lawrence as a base of operations for its administrative staff. We’ll be in about 7,500 square feet of office space immediately left — or west — of the Protection One offices. We also will have another 2,500 square feet of space to house some of the back office functions of the company.

Our office will be just across the street from the toll plaza of the turnpike, so all you commuters can stop and buy a paper to read on your way to work. (Legal disclaimer: Do not tell the officer that I gave you permission to read the paper while driving. Keep me out of it.)

In all seriousness, we are pleased to have found the North Lawrence space on relatively short notice, but it certainly will be an adjustment for us all. The Journal-World has been downtown forever. Staying downtown certainly was high on our wish list for a new location.

The Simons family, though, approached the Journal-World about moving by May 1 because there was concern that the deal with Blue Cross Blue Shield of Kansas would fall apart if the health insurance company couldn’t be in the building by then. The Simons family worked hard to get the deal with Blue Cross Blue Shield, and we certainly didn’t want to be the reason it didn’t go through. So, in late February, we negotiated a deal to leave by May 1. That decision, though, meant we really needed to have a pretty turnkey office to move into. We looked at several places in downtown, both to buy or to lease, but it was difficult to find one that didn’t need improvements that would take us past the May 1 deadline. Building a new set of restrooms, office walls, ADA accessible ramps and other such improvements for a 50-employee office is tough to do in a two-month time period.

While we love the News Center building (I think it may be the nicest office building in town), I also believe that Blue Cross Blue Shield can be a great addition to downtown. Although we have reported Blue Cross Blue Shield doesn’t plan to add a ton of employees to the building right away, I’m optimistic that this building has the health insurance company poised to grow in significant ways in Lawrence in the future. They’ll have a great building to do it in.

As for the future of the Journal-World, we don’t expect our move to inconvenience any of our customers. While we have a lot of packing to do, we will continue to operate throughout the move. We’ll be in our new location — our official address will be 1035 N. Third St. — by May 1. While many of you do your business with us online or via the phone, for those of you who come to see us in person, we’ll have nice offices and plenty of parking for you to buy a classified ad, update your subscription or give us a news tip.

No matter where we are located in the community, the Journal-World and its staff always will be a part of it, working hard to cover the most important and interesting news that happens in it. And North Lawrence will be fun. I know some North Lawrence restaurants will benefit from the horde of J-W employees who refuse to bring their lunch to work. I know I’ve already begun to buy ties that match the color of red on a Johnny’s pizza.

I’ll keep you updated on our exact moving date as it gets closer.

There’s also another significant move happening in the I-70 Business Center. The driver’s license office is moving next week. The DMV is moving into larger space just a couple of doors down from its current location in the center.

And, yes, the move means there will be more driver’s license examiners to issue you a license. The office is hiring six additional people, Zachary Fletcher, a spokesman for the Kansas Department of Revenue, told me via email.

The new office will be about 7,000 square feet, which is more than double the size of the current office. With the extra space, the office is adding a new front counter position that will serve as a greeter who can review your documents. That position is designed to make sure you have everything you need before you start the process rather than waiting in line only to find out you didn’t bring the right type of identification.

Fletcher said the Lawrence office is a busy one, and Department of Revenue leaders recognized it could benefit from more staffing.

“In 2018, the Lawrence driver’s license office processed almost 30,000 transactions,” Fletcher said via email. “The staffing numbers in the current office are insufficient to maintain adequate customer service and reasonable service times for that volume of customers.”

The DMV office will close on Friday to begin making the move. It will open for business on Monday, April 8, Fletcher said.

As for the DMV’s existing space, the Journal-World is leasing that space to house some of its back-office operations.