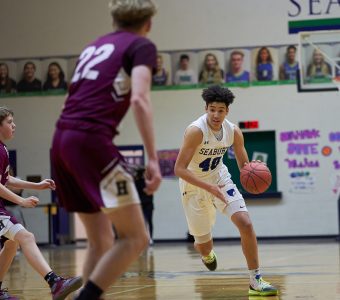 Bishop Seabury sophomore Juju Ramirez (40) drives to the rim during the opening round of sub-state Tuesday night at BSA on March 3, 2020.

Monday marked the first day that college basketball coaches could contact high school prospects in the class of 2022 directly, and the coaching staff at Kansas did not have to look far for one of its calls.

Juju Ramirez, a junior-to-be from Bishop Seabury Academy who announced last week that he was headed to New Hampton Prep in New Hampshire next season, received a scholarship offer from KU late Monday morning.

“(KU assistant) Coach (Kurtis) Townsend called me to let me know that they’ve been interested in me for a while and that I had a full offer to KU,” Ramirez told the Journal-World.

Ramirez, whose mother, Danielle Geronymo, played volleyball at KU in 1999 and 2000, said the call came as a surprise and that he was equal parts nervous and excited while on the phone.

“I always figured if I worked hard enough I could eventually get an offer from KU,” the rising prospect said. “But I wasn’t expecting it to come this soon.”

At 6-foot-9, Ramirez can play inside and on the perimeter.

His father, Carlos Ramirez, who was a part of the first Free State team in the late 1990s, said his son’s size, versatility and potential have enticed several coaches to take a look.

“As a guy from Lawrence, this is just incredible,” Carlos Ramirez told the Journal-World. “We were surprised to hear that KU was offering, honestly. But now that they have, it feels like it’s time to buckle up. Everybody’s going to know about Juju.”

Both father and son said one of their biggest takeaways from Monday’s development was the fact that the KU offer put a target on Juju Ramirez’s back.

“It’s definitely eye-opening,” Juju Ramirez said. “It really makes it feel real now. And if this is the way it’s going to be, I better get ready.”

That shouldn’t be a problem. Juju Ramirez typically works out several times a day, spending time with strength trainers, basketball instructors and jump coaches. In the past year, the lefty has become dangerous from behind the 3-point line, and he also is focused on adding enough muscle to become a factor on the glass.

“I’m ecstatic and I can’t wait to see what’s going to happen,” Carlos Ramirez said. “But we both know he still has a lot of work to do to get where he wants to go, and I promise you he’s not going to let up one bit because of this offer.”

Juju Ramirez, who was slated to play AAU ball with MOKAN this summer, was one of several juniors the KU coaching staff reached out to on Monday.