Paul Pierce soaks up the crowd's applause after hitting a three-point shot as the shot clock expires to give the blue team a 111-108 lead at the Legends of the Phog game Saturday, Sept. 24, 2011 at Allen Fieldhouse.

With games on hold because of COVID-19 and live sports reduced to replays of games gone by, the NBA is working on plans to create a H-O-R-S-E competition, according to ESPN’s Adrian Wojnarowski.

Wojnarowski’s report indicates that the shot-making competitions would be televised by ESPN, would include “several high-profile players” and would play out in isolation, with the competitors going head-to-head in their home gyms and other settings that preserve social distancing practices. According to Wojnarowski, current NBA isolation protocols make it impossible for players to compete in the same location.

Details, including the schedule and commitment from the players, are still being finalized.

At least one player with Kansas ties appears to be interested in joining the fun.

“I’m in,” tweeted KU great Paul Pierce in response to Wojnarowski’s Saturday tweet about the event.

Pierce, who played three seasons at Kansas and ranks 10th on the Jayhawks’ all-time scoring list with 1,768 points, was drafted by the Boston Celtics with the No. 10 overall pick in the 1998 NBA Draft.

Pierce retired from basketball in July 2017 and has his jersey hanging in the rafters at both Allen Fieldhouse and Boston’s TD Garden.

One day before his No. 34 jersey became the 23rd number retired by the Celtics, former Boston great Robert Parish called Pierce “the greatest offensive Celtic ever,” in an interview with ESPN.com.

The NBA has been shut down since March 12 and there is no telling when, or if, the league might resume play this season.

There also has been no indication of whether Pierce will be included in the H-O-R-S-E competition.

KU the pick of college coaches

Had the NCAA Tournament been able to play on, Monday night would have marked the 2020 men’s national championship game in Atlanta.

And there are plenty of coaches out there who feel that Kansas would have been one of the two teams still playing.

Evan Daniels of 247Sports recently asked 115 college coaches which team would have won it all this season. And while 15 different teams received a vote, no program was named more than Kansas, which received 49 votes.

The next closest program in Daniels’ informal poll was Gonzaga, which received 17 votes. Dayton ranked third at 15 votes. All three programs were projected to be No. 1 seeds in this year’s Big Dance. 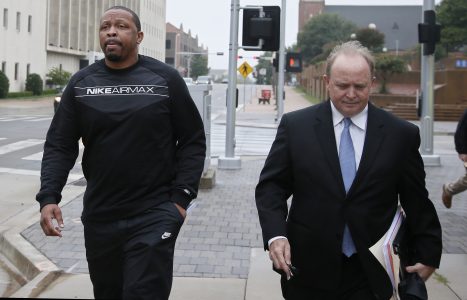 How much, if anything, can be learned about KU’s case from the NCAA penalties handed down to Oklahoma State on Friday