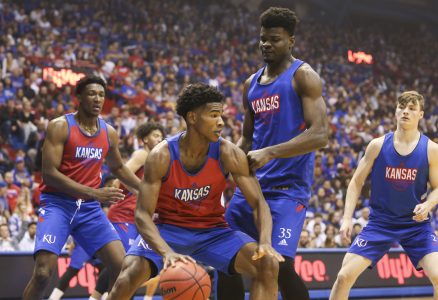 Given the fact that Snoop Dogg’s Late Night set was three times as long and a lot more eye-opening than the Jayhawks’ scrimmage, it makes sense that the music stole so many headlines Friday night and Saturday morning.

But this was a basketball event after all, and KU coach Bill Self was more than happy to talk hoops after it was over.

“I thought neither team guarded a lick tonight and I thought it was brother-in-law ball,” Self said long after the festivities had ended. “I thought that big guys didn’t rebound and guards didn’t pass it very well and I really think that was a perfect example of how we’re not supposed to play.”

While similar words have come out of Self’s mouth after every Late Night scrimmage for the past decade and a half — he even made note of that himself on Friday — there were still a few notable moments during the Jayhawks’ scrimmage, which came before Snoop took the floor and featured 10 scholarship players.

The Crimson squad, which featured three projected starters — Ochai Agbaji, Marcus Garrett and Silvio De Sousa to the Blue team’s two in Devon Dotson and Udoka Azubuike — topped the Blue squad, 32-30, in a fast-paced, up-and-down 12-minute teaser for the season ahead.

Here’s a look at a few highlights:

Although Self twice noted that nobody should take too much from Friday’s scrimmage, the fact that sophomore guard Ochai Agbaji handled the ball in the half court and even initiated a little offense off the dribble was important.

“Ochai needs to become our third handler, no question about that,” Self said. “That’s really been something that’s kind of been thrown in there (with) the reality that that could become an issue here in the last week or 10 days.”

Before that, Self and company believed that freshman guard Issac McBride would fill that role, even if only in an emergency capacity. But with McBride leaving the program last month, the need to identify another reliable ball handler behind Dotson and Garrett moved to the top of the priority list.

“If one of those guys were to get hurt then Ochai would have to be our second handler in the game, at least the way I see it right now,” Self said. “So it’s going to be real important that Marcus and Devon stay healthy.”

The breakneck pace of the 12-minute scrimmage rarely slowed and became a flat-out foot race at times.

But don’t take that to mean the Jayhawks will employ a run-and-gun style all the time during the upcoming season.

“Well, I think we could play fast,” Self said. “But it’s a lot easier to score fast when the other team never tries to guard you. That’s not how we’ll play. … I do believe that there’s some potential to score the ball (fast), but there should be more potential to defend it and you didn’t see that tonight.”

Self has seen much better defense throughout the practices KU has had without 16,000 fans watching.

“Yeah. Pretty good,” he said. “Not great. We still have to figure out how to guard ball screens because we’re not good at it yet. But hopefully in the next two or three weeks we’ll become better and by the time we play Duke we’ll be much better than we are today at it.”

After tweaking his hamstring on the first official day of practice last week, KU senior Isaiah Moss, a graduate transfer from Iowa, got back to practice earlier Friday but did not participate in the scrimmage.

“He practiced (Friday),” Self said. “And his hamstring tightened on him so we decided to hold him (out).”

That fact, at least in part, contributed to the Jayhawks playing a 12-minute scrimmage instead of the more traditional 20-minute battle.

“We were going to go 20 minutes,” Self said. “(But) I’m glad we didn’t because we only had 10 scholarship guys out there and then you throw in (walk-ons) Elijah (Elliott) and Chris (Teahan) and Michael (Jankovich). One team only had six. So even playing a short amount of time, that wasn’t enough time to accomplish anything so I thought it was better to get in and get out considering our injury situation.”

With KU basketball Media Day slated for Wednesday and Big 12 Media Day set for Oct. 23, the Jayhawks have just a handful of practices and those two media days remaining before the arrival of the 2019-20 season.

KU opens exhibition play on Oct. 24 against Fort Hays State at Allen Fieldhouse and will follow that up with their final tuneup on Oct. 31 versus Pittsburg State.

After that, things get going for real, with KU taking on Duke in the season opener at 6 p.m. Nov. 5 at the Champions Classic at Madison Square Garden in New York City.