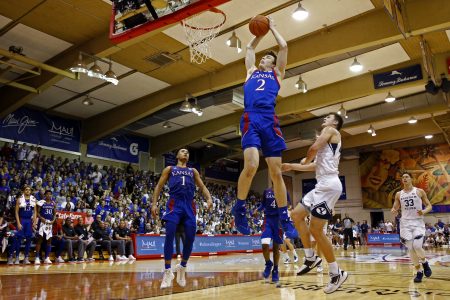 Over the course of 12 games in three days, there were at least a few dozen plays at the Maui Invitational that made fans jump out of their seats.

And many of those plays, be they big-time blocks or dunks, deep 3-pointers or high-flying plays in transition, will be remembered for a while.

The 2019 Maui champs had their share of those plays and moments. Here’s a quick look back at the best of the best from where I sat.

On back-to-back plays late in the second half of KU’s 90-84 overtime victory over Dayton in the title game, Dayton coach Anthony Grant put the ball in Mikesell’s hands at the top of the key and told him to drive it to the rim against Azubuike. So he did. And on back-to-back plays Mikesell came up empty.

The first miss was the result of an off-balance shot forced by Azubuike, who slid his feet well and used his big body to wall off any path to the rim. The second miss was more of the same, only this time, instead a Mikesell miss, Azubuike made sure the shot had no chance to go it, swatting it emphatically off the glass and then taking an extra second to wave his finger Mikesell’s way as the Dayton forward got up off the ground.

Azubuike does not get near enough credit for how athletic he is and how well he moves his feet. These were both big-time plays that may have saved the game and definitely kept Dayton from seizing momentum late.

And while his 29 points, ferocious dunks and even the three clutch free throws he drained late will likely all be remembered first when people look back at this game, this block will always be what jumps out in my mind.

He entered the game on a bit of a shooting slump and found some confidence by knocking in a couple of deep jumpers and finding a little bit of a rhythm.

Who knows if those early makes created the confidence for Agbaji to deliver one of the 10 best dunks of the tournament. But they surely didn’t hurt.

Late in the first half, with Kansas leading by a dozen, Agbaji’s caught a bit of good luck when a Chaminade player lost control of the ball and it landed like a hot potato right in Agbaji’s hands. Rather than waiting for teammates, Agbaji raced to the other end of the floor looking to finish.

As he took off, it appeared like a tough layup would come next. But the strong and athletic sophomore from Kansas City, Mo., just kept climbing until he was higher than the three Chaminade players hounding him.

One made an attempt to block the shot, but Agbaji gave him no chance, punching it through with two hands and giving the Jayhawks the extra surge of momentum they needed to build a 20-point halftime lead and put the Silverswords away.

Although he has looked a little off in transition so far this season, these are the types of plays Agbaji can make. And that dunk along with his all-around play in this tournament — five turnovers in 103 minutes — should springboard Agbaji into some more big moments in the upcoming weeks.

3 – Devon Dotson’s save in the backcourt of a near turnover vs. Dayton

I know saves don’t often make highlight reels unless they lead to some ridiculous dunk or feature a player going head-first over press row and into the crowd. But this save by Dotson, in a game where so much seemed to be on the line on each possession, was definitely a highlight.

First off, the save was a bit self-serving, as it helped Dotson prevent a turnover that would have been 100% on him.

After losing the ball near midcourt late in the second half, Dotson sprinted back to the far corner of the court by the Dayton basket, scooped up the ball, put it down for one dribble, stopped on a dime before going out of bounds and used his body control and strength to lean backward to keep himself from falling and giving the ball back to Dayton.

The play happened 2 feet in front of my seat, so it’s possible that the angle I had contributed to my thoughts on how impressive this play was. But that angle also gave me the best possible look at the play’s degree of difficulty. Eight or nine out of 10 players probably would have lost the ball there in some manner, be it never picking it up in the first place, traveling or falling out of bounds with it. Dotson did none of those things, which was a credit as much to his competitiveness as his athleticism.

When I saw it live, I thought the KU freshman caught a break here and got credit for a vicious dunk on a ball that was all but thrown into the cylinder in the first place by point guard Devon Dotson.

But then I caught the replay — a few hundred times on SportsCenter — and the television angle provided a great look at Braun catching the ball a couple of feet from the rim and flushing it while flying high through the lane.

Braun always has and likely forever will surprise people when he does these types of things. But his teammates and Jayhawk fans know he’s more than capable.

The first of many for the talented, hard-nosed freshman, this one was not necessarily a crucial part of the game, but it served as the exclamation point and likely will be a highlight that Braun and his teammates remember forever.

5 – Udoka Azubuike’s pass to Marcus Garrett that tied the title game at 66 with 4:01 to play in regulation

From a highlight perspective, this is easily the most boring play on this list. But from a basketball IQ perspective, it might be the best.

With KU in the midst of erasing an 8-point Dayton lead with under 8 minutes to play and Azubuike playing out of his mind, with power and patience, poise and purpose, the big man caught a pass in the post and paused.

Instead of turning immediately and frantically trying for another rim-rocking dunk, Azubuike gathered himself, kept the ball high and got his eyes in good position to clearly see and assess the double team that Dayton sent his way.

As the help defender raced over to Azubuike, who had been abusing the Flyers down the stretch, Garrett slipped to the basket and found himself all alone. Azubuike found him immediately and flipped a soft pass to Garrett, who caught it and laid it in all in the same motion.

The bucket tied the game. Kansas never trailed again. And three possessions later, Garrett flipped the script and fired a pass into Azubuike, who did the rest with some nifty post moves to put KU on top for the first time since 58-57 with 9:14 to play.

Kansas still needed overtime to win the game, so you can’t say that this play was the most crucial or the game-winner or anything like that. But in terms of momentum and maintaining control, I’m not sure there was one bigger.