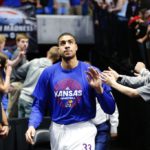 Kansas senior center Landen Lucas walks out onto the floor at the BOK Center ahead of Sunday's game against Michigan State in the second round of the NCAA Tournament.

With his stint on team “Self Made” set for late July, former Kansas big man Landen Lucas found something to keep him busy during the early portion of the month that also will help whip him back into playing shape.

Lucas on Saturday announced on Twitter that he will join the Atlanta Hawks’ summer squad next month in Las Vegas.

The NBA’s Summer League is slated to run July 5-15 and will feature a handful of former Jayhawks.

Lucas is a veteran of the Summer League scene, having played for the Boston Celtics during his first summer out of college before heading to Japan to begin his professional career.

The Hawks, with Trae Young, John Collins and recent draft pick Jaxson Hayes, of Texas, are one of the more exciting young teams on the rise in the NBA. They also have room to make a splash in free agency in their attempt to rebuild the franchise into a contender.

As for the rest of the former KU players currently known to be participating in the NBA’s Summer League, Dedric Lawson will play for Golden State, Lagerald Vick will play for Houston, Thomas Robinson joined the San Antonio squad, Malik Newman will play with Cleveland and Svi Mykhailiuk, who lit the league on fire last summer with the Los Angeles Lakers, will play for the Detroit Pistons, who traded for the former KU sharp-shooter midway through his rookie season.

Class of 2020 guard Bryce Thompson, who owns a 5-star rating and is one of the top players in his class, was in town this week to make an unofficial visit to Kansas.

Thompson, a 6-foot-4, play-making guard with good size and great vision, was in town from his hometown of Tulsa, Okla., on Thursday, when he met with the KU coaching staff, toured the campus and basketball facilities and gathered more information about how he might fit into KU’s future.

“Had a great visit at KU,” Thompson Tweeted. “Thanks to Coach Self and the Jayhawk staff for being wonderful hosts. #RockChalk.”

Thompson’s recruitment is wide open and he is expected to visit several schools and take a thorough look at all of his options before making a decision.

Had a great visit at KU! Thanks to Coach Self and the Jayhawk staff for being wonderful hosts. #RockChalk