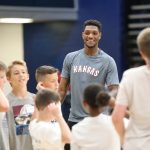 Kansas forward Silvio De Sousa watches over a game of "simon says" during a Washburn University basketball camp on Tuesday, June 4, 2019 at Lee Arena in Topeka.

Fully focused on making his return to the court with the Kansas Jayhawks next season, KU junior Silvio De Sousa made a quick trip to New York City this week.

To be there when his close friend and fellow countryman Bruno Fernando was drafted during Thursday night’s NBA Draft.

The moment came early in the second round when the Philadelphia 76ers — yep, Joel Embiid’s squad; Kansas ties abound — made Fernando the 34th pick in this year’s draft. And with the former Maryland forward being at the draft in Brooklyn, both he and De Sousa got a little TV time after the pick was announced.

Fernando was later traded to the Atlanta Hawks and soon will begin his quest to become the first player from Angola to play in the NBA.

De Sousa posted a video replay of the big moment on his Twitter page and KU coach Bill Self talked about De Sousa being there to support Fernando shortly after the draft wrapped up late Thursday night.

“We’ve known that all along,” said Self when asked about De Sousa being at the draft. “Bruno and him are basically brothers, and there was no way that Silvio wasn’t going to be there for Bruno. They are so tight.”

A 6-foot-10, 237-pound power forward with a tenacious motor and terrific athleticism, Fernando averaged 13 points and 10 rebounds a game for the Terrapins last season.

Wrote ESPN.com draft expert Jonathan Givony in his breakdown of the pick: “Fernando was considered one of the best big men prospects in this draft, thanks to his chiseled physique and improved skill level, but he ended up falling to the second round due to the diminishing value teams seem to be placing on traditional centers in his mold. The Hawks could develop him into a functional backup, as there are some things to like with his size, athleticism and motor.”

That sounds a lot like an assessment of De Sousa’s game. And, with a big year for the Jayhawks in 2019-20, KU’s 6-9, 250-pound Angolan could find himself as the one waiting for his name to be called a year from now in New York, with Fernando no doubt sitting by his side.

No Jayhawks were selected in Thursday’s draft, marking the first time since 2009 that KU did not have a player picked in the NBA Draft.

Former KU forward and All-American Dedric Lawson did agree to a summer league deal with the Golden State Warriors shortly after the draft ended and former KU guard Lagerald Vick is expected to get a shot with a summer league club, as well.

WOAW!!!
1st One ever from ANGOLA