Jalen Wilson’s addition all about versatility — past, present and future 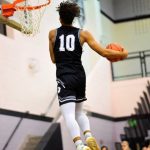 New Kansas basketball signee Jalen Wilson skies for a slam dunk during a Guyer High game in Texas. Wilson, who will wear No. 10 for Kansas during the 2019-20 season, signed with the Jayhawks on June 12, 2019.

It’s been a wild ride for Kansas basketball fans who have been tracking the Jayhawks’ efforts in the 2019 recruiting class.

From the days of banking on 5-star prospects like Jeremiah Robinson-Earl and Matt Hurt coming to town to the whiffs and near-misses that surrounded both, it’s been a tough spring for fans of Kansas recruiting.

But Wednesday’s commitment from Jalen Wilson, a 4-star prospect ranked No. 47 nationally by Rivals.com, changed all of that and set off a pretty wild party.

No, the Wilson signature does not change the fact that this is Bill Self’s first class at Kansas without a Top 40 player. And, no, you shouldn’t believe your buddy who tells you Wilson is a better player than all of those other guys anyway and Kansas is better off with him than they would’ve been with JRE, Hurt, R.J. Hampton or a handful of others.

But that’s the thing that’s so much fun about following recruiting — if you have the stomach for it.

One day, a player ranked No. 47 in the nation could barely be worth tracking. I mean, after all, guys in the 30s and 40s are typically only 4-star prospects.

But then the next, be it because of hype, circumstance or a wicked combination of both, that same prospect could be viewed as the guy, an absolutely steal and a big time pick-up for your favorite college basketball team.

Jalen Wilson can play. There’s no denying that, and it’s not just his highlight videos or extreme confidence that will tell you that.

At 6-foot-8 with room to grow and a physical frame that’s already built for a quick adjustment to the college game, Wilson will step into the Kansas locker room and be ready to fight for a spot in the rotation right away. The guess here is that he’ll probably earn significant minutes and will give Self and company the kind of flexibility they want in terms of who to play and how to play this year and also as they try to stockpile assets for the years ahead.

Last season, it looked like Ochai Agbaji would redshirt only to have injuries change his path. This season, it’s now almost certain that a couple of players will redshirt, with freshmen Christian Braun and Tristan Enaruna and senior Mitch Lightfoot leading my list of potential redshirt candidates.

Things can change. We saw that last year. And all three of those guys — along with the nine other scholarship players on the KU roster — are more than capable of playing big roles right away.

But there are only so many minutes to go around, and if a guy can save a year and play a bigger role on a future KU team, why would he want to fight his butt off to play 4 or 5 minutes a game on a team that’s stacked?

Enough about that. Let’s get back to Wilson. The biggest reason he’s not on my list of possible redshirt candidates is because of that versatility we talked about earlier.

He doesn’t have the same raw talent of a player like Josh Jackson and he’s nowhere near the type of shooter that Svi Mykahiliuk was/is, but in terms of his body type, he can fill that role. If the Jayhawks want to play small and use Wilson as a 4 man who plays on the perimeter, his presence allows them to do it.

If Self and company want to play big and decided to use Wilson as a 3 with two other bigs in there with him, Wilson’s presence allows them to do that, too.

Imagine a lineup that includes Marcus Garrett, Ochai Agbaji, Jalen Wilson, Silvio De Sousa and Udoka Azubuike. That’s a big bunch, but it still has three players — 3 and a half if you count Silvio — who are incredibly comfortable playing on the perimeter.

That lineup won’t be out there much. For one, it’s going to be awfully hard to take Devon Dotson off the floor. For two, teams throughout college basketball are going smaller and smaller each year and that often forces a coach’s hand in terms of match-ups, even when that coach wants to play big.

But the point is, with Wilson in the mix now, that lineup — and so many others — is entirely possible. And that alone should be excited for Kansas fans.

For what it’s worth, Enaruna brings a lot of the same things to the table as Wilson does. So KU may have been able to go this route even if Wilson picked North Carolina or Michigan. But he didn’t. And now KU can bring Enaruna along slowly and at a more comfortable pace and watch him blossom into a big time player in his own right, both because of the coaching and development tools he’ll receive and as a result of having to compete with a player like Wilson every day.

It’s worth noting here that the timing of Wilson’s commitment has a lot to do with the hype surrounding his addition to the roster. Had he been the first player in the class to pick KU, his commitment, at No. 47 overall, might not have wowed anybody. But with it coming today — in June, by God — after KU missed on those other players in whom KU fans had invested so much time following and longing for, adding a player like Wilson must seem like a dream come true.

A similar thing happened last season with Romeo Langford, who wound up picking Indiana and is now preparing for next week’s NBA Draft. Langford would have been a nice pick up for Kansas and might have had a monster season. But because he was the last major player to make his decision, it magnified just how bright his star shined.

Speaking of past comparisons, take a look at these familiar Jayhawks, who all were ranked by Rivals.com within 10 spots of Wilson in their respective classes.

While the book is still being written for Garrett and Enaruna, those other former Jayhawks all enjoyed pretty stellar college careers, with two of them winding up as NBA draft picks.

If Wilson can follow in their footsteps, regardless of how long he’s at KU, he’ll be remembered as a wild success and no one will care where he was ranked or when he signed. What’s funny about that is, Wilson’s game, if you look at it from all angles, is pretty much a combination of what those five players brought to the table.