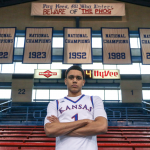 Four-star Class of 2019 prospect Tristan Enaruna attached this photo to the Twitter message he sent announcing his commitment to Kansas on Tuesday, May 7, 2019. Enaruna is a 6-foot-9, 205-pound forward from Netherlands who played his high school ball at Wasatch Academy in Mount Pleasant, Utah.

Still overseas in Greece, playing with the Netherlands national team in the U18 FIBA European Championship, Kansas freshman Tristan Enaruna’s summer run with his countrymen came to an end on Wednesday.

Enaruna, who helped the Dutch advance to the Round of 16 by averaging 19.3 points in 33 minutes per game during Group play, has been a key part of his team’s offense and not been afraid to shoot the ball.

And that continued on Wednesday. In a 79-72 loss to Slovenia, Enaruna played 40 minutes and led the Netherlands with 21 points on 9-of-22 shooting. He also added 13 rebounds and 2 blocks while hitting 3 of 6 from 3-point range in a losing effort.

The loss knocks the Dutch out of the tournament and frees up the rest of Enaruna’s summer. He’ll report to Lawrence in a few weeks for the start of preseason conditioning and his freshman year at KU. Classes begin on Aug. 26.

Here’s a quick breakdown of Enaruna’s four games in Greece.

• In 32 minutes of the blowout victory, Enaruna exploded for 29 points on 12-of-23 shooting from the floor. He easily could have topped 30 points but shot just 1 of 6 from 3-point range despite being red hot everywhere else. He added 4 rebounds, 3 steals, 2 blocks and 2 assists in the easy victory.

• In 35 minutes on Monday, Enaruna could not find his offense in a 6-point loss to Finland that cost the Dutch in terms of seeding in the Round of 16. He finished 4 of 16 from the floor and 0 of 3 from 3-point range in the loss. Doing his best to make up for the off shooting night, Enaruna ripped down 13 rebounds and dished 3 assists while swiping 2 steals.

• Although it came in a losing effort, Enaruna saved his best for last, both from a complete-game standpoint and in terms of his time on the court and his 3-point shooting. After making just 2 of 13 from 3-point range in the tournament’s first three games, Enaruna knocked in 3 of 6 shots from behind the arc on Wednesday, giving him an overall clip of 5 of 19 (26.3%) from 3-point distance for the tournament. Back to back games of 13 rebounds is certainly a high note to go out on, even if Netherlands finished with just one victory in four tries. One alarming note from Wednesday came from the fact that the KU freshman finished 0 of 4 at the free-throw line, giving him a 10-of-26 mark (38.5%) at the line for the tournament.

Those last two games, minus the high volume of shots, seem like the best representation of where and how Enaruna can make an immediate impact on the 2019-20 Kansas basketball team, provided he cracks the rotation.

I’d be willing to bet that the 6-foot-8 freshman from Wasatch Academy in Mount Pleasant, Utah, won’t take 16 or more shots in a single game during his first two seasons at KU. But he took at least 16 in all four games in Europe.

While that no doubt has been good for his confidence as an offensive weapon — although the 41.6% shooting, 26.3% from 3-point range likely left something to be desired — Enaruna’s biggest impact with the Jayhawks in Year 1 figures to come around the rim, with the long, athletic freshman stealing extra possessions and points on the offensive glass and cleaning things up on defense.

He probably won’t grab 13 boards in a single game at Kansas anytime soon, but that shouldn’t stop him from trying. And based on what we saw from Enaruna during a pair of camp scrimmages and pickup games this summer, staying around the rim appears to be a big part of Enaruna’s plan at Kansas.