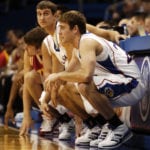 Add another head coach to the Bill Self coaching tree.

Former Kansas walk-on Chase Buford, who played for Self at KU from 2007-10, has been named the head coach of the Wisconsin Herd, the NBA’s G League affiliate of the Milwaukee Bucks.

Buford, 30, becomes the second head coach in Herd history and takes over fresh off a trip back to Lawrence, where he helped the Self Made alumni squad prepare for the TBT tournament on the KU campus.

During his recent time in Lawrence, Buford not only helped organize and instruct the Self Made squad in preparation for the TBT, but he also got on the court with them and worked them out, playing defense and illustrating with actions what he was saying with words.

He appeared to be a natural born leader, carried the command of a head coach and had all eyes and ears on him when he spoke, even those of Self, who stopped by one Self Made practice early last week.

Buford is the son of longtime San Antonio Spurs executive R.C. Buford and has been involved with basketball on some level for nearly all of his life.

“Chase has had wide-ranging basketball experiences over the past seven years, both in the G League and the NBA, and we believe he’s one of the bright young coaches in the game,” said Herd General Manager Dave Dean in a news release announcing the hire. “We are excited by his approach, fresh ideas and collaborative spirit. It’s a pleasure to welcome Chase to Wisconsin and to the Bucks family.”

Buford most recently served as an assistant coach for the Delaware Blue Coats, the NBA G League affiliate of the Philadelphia 76ers. Prior to his time in Delaware, he spent the 2017-18 season as an assistant coach for the Erie BayHawks, the G League Affiliate of the Atlanta Hawks. Buford’s career in professional basketball began in 2012 as a regional scout with the Atlanta Hawks before he was promoted to video intern.

From 2015-17, Buford was the coordinator of player development for the Chicago Bulls.

“I am thrilled to be the head coach of the Wisconsin Herd and to join the Bucks organization,” Buford said in the release. “I want to thank Dave Dean and the Bucks for giving me this opportunity in the G League. I am looking forward to developing young, talented players on and off the court. I cannot wait to get to work.”

In a limited role on the 2008 national championship team at Kansas, Buford, then a freshman, appeared in 13 games for the Jayhawks, all of them coming in the final minutes of KU blowouts.

During his three seasons in Lawrence, he played in 35 games for Self’s Jayhawks and always seemed destined for a coaching or front office type of role in basketball beyond graduation.

After his junior season, Buford stepped away from the basketball program to focus on academics and finishing his degree.

“We, as coaches, have thoroughly enjoyed having Chase as a member of our program the last three years,” Self said at the time. “I totally understand — this being his senior year and the time commitment involved — that he wants to pursue some other interests and also enjoy being a normal college student for his final campaign. He’ll always be a Jayhawk. He will always be part of our program, but certainly we respect the fact that he has other interests and wish him the very best.”