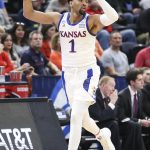 Quick, think for a second about the one current or former NBA player who you would hire to help mentor and tutor former KU forward Dedric Lawson as he starts his NBA journey.

How about Tim Duncan?

The Big Fundamental, who recently retired from a Hall of Fame career with the San Antonio Spurs seems like the perfect choice to help facilitate Lawson’s development from sleepy smooth college star to legitimate NBA player.

And now it appears as if Lawson will get that opportunity.

After playing limited minutes with the Golden State Warriors’ summer league squad in Las Vegas, Lawson evidently has agreed to a contract with San Antonio.

Several reports about Lawson’s deal popped up on Twitter Monday night and when you combine that news with the recent news that Spurs coach Gregg Popovich was hiring Duncan to be his newest assistant coach, it sure seems like the stars are aligning pretty perfectly for Lawson right about now.

Undrafted in June after an All-American season at Kansas in 2018-19, Lawson reportedly has agreed to an Exhibit 10 contract with the Spurs. This is different than a two-way deal in which a player splits time between the NBA club and its G League affiliate and, in some ways, is better.

Exhibit 10 contracts are basically non-guaranteed, one-year deals worth the league minimum. That number, for a player with 0 years of experience last season was $838,000. Not bad.

The good news there is that as long as you remain a valuable asset in the eyes of the team, you’ll be on the NBA roster, cashing legitimate paychecks and learning the game and life from people at the highest level. The bad news is if at any point they decide you no longer have any value, you can be cut without compensation.

Still, for Lawson, who has proven to be incredibly coachable and has a bunch of skills that could be groomed into a long NBA career, the opportunity to play for Popovich, in the Spurs organization and with Tim Duncan helping you out is about as close to hitting the lottery as any player can get.

Now it’s up to Lawson to make the most of it and show the Spurs that he’s worth their time and investment.

Talk about Christmas in July for McLemore. To go from unemployed and wondering where your next gig might take you to suddenly joining James Harden and Russell Westbrook in Houston. That’s a much, much better scenario than anything the former KU star has experienced in his brief NBA career, even if the money and playing time aren’t quite as high as the others.

McLemore still has a lot to offer any team, both in terms of shooting and scoring and as an athlete. This fit — from the way the Rockets play on both offense and defense to what his role might be — seems to be about as good as McLemore could’ve found in today’s NBA.

Being told #Spurs have agreed to terms with forward Dedric Lawson out of Kansas. Deal is a non-guaranteed Exhibit 10 contract. #NBA @TheAthleticNBA pic.twitter.com/KGzSROQ92h